By all accounts it was a successful overseas visit, not merely for the fact that he managed to articulate India's standpoint across fora or offered prescriptions for global ills, but more for the fact that Dr Singh managed to walk the diplomatic tightrope between diverse suitors even while keeping a firm eye on where his interests lay.

If the 9th India-Asean and the 6th East Asia summits signalled a ganging up against China -- at least in popular perception, if not in reality -- where maritime security, an euphemism for navigation through South China Sea, was up for discussion despite Beijing's chagrin, Dr Singh also held his own at the bilateral meeting with his Chinese counterpart Wen Jiabao, which according to official extended well below the scheduled time. "They get along very well," said a source who was in on the discussions.

And, if he managed to keep China in good humour, Dr Singh also tried to put the spluttering India-United States tie back on the rails with his long-in-coming bilateral with US President Barack Obama. As the prime minister 'reported' to Obama, the irritants in the ties between them were being sorted out: the nuclear liability bill was being tweaked, and India voted against Iran on the IAEA report over its nuclearisation plans.

If diplomacy was the art of walking the tightrope with a blindfold, then this visit showed that Dr Singh has evolved into a lithe trapeze artist, swinging from end to end without once losing his grip.

Highly-placed government officials in New Delhi, concurred. "We calculate what is in our best interests and act accordingly," they said. "We follow who/what is in our interests, and we work with whoever for it. After all, we are in a situation where there are many powers, and the world has moved on from a position of 'if you are not with us you are against us' kind of mindset."

"If you are used to a bipolar world you may find this unsettling, but we are the only ones practising this, everyone does it. It is taking into account global realities."

Pointing out that in his opening remarks at their bilateral on Friday in Bali, Chinese Prime Minister Wen Jiabao said that whenever the two nations worked together they were able to articulate global concerns better, the sources said not only did the meeting between them last longer than scheduled, they also had a frank discussion on all issues of concern to them.

"Prime ministers don't negotiate, they only discuss issues and leave the negotiations to the others," the sources said.

In fact, more than the stapled Chinese visas for the people of Kashmir and Arunachal Pradesh, which the sources said have stopped for a few months, what is important is their position on Kashmir where, since the mid-1990s they have kept out of it as a bilateral issue.

"In fact, if you want to see how much the world has moved on look no further than Kashmir," another official said. "There was a time when it was the only issue being discussed on global fora vis-a-vis India. Today is anyone even mentioning it? India's position has been accepted."

If India's liability clause for foreign suppliers of nuclear plants and its stand on Iran's nuclear issue were irritants with the US, both the issues were sought to be nixed last week. India's tabled new regulations on the liability of suppliers for discussion, and voted against Iran on the IAEA report on its nuclear plans.

While on the nuclear law the sources said they were yet to hear from the suppliers lobby on the amended clauses, even while not ruling out politicisation of the issue, on Iran, it was clear that merely because it had voted against Iran India won't plumb wholesale for a hard line as the West would like.

Our position has always been that there should not be any further nuclearisation of the region, but that doesn't mean we don't support Iran's right to peaceful nuclear energy. "We are very clear that yelling at them won't work. At the same time, they must clarify to the international community what they are doing, legitimate concerns should be addressed through the IAEA, in that sense nothing has changed for us."

But even this little movement, it seems, has thawed the US's position. For in a quick pull-aside on the sidelines of the East Asia summit, Australian Prime Minister Julian Gillard apprised Dr Singh of the steps being taken by her government to secure her Labour party's okay for selling uranium to India, a turnaround from Canberra's earlier stated position.

This change, sources said, could only have come about on the US's insistence.

"All this shows that the world is changing, it is not a static entity anymore, we are successfully dealing with the US, Russia and China and others to secure what is the best for India," the sources said.

Dr Singh returned ahead of Parliament's winter session beginning Tuesday, where there is no dearth of issues bedevilling his government. Will he and his managers show the same ingenuity in dealing with domestic issues as they have done overseas? Let's wait and watch. 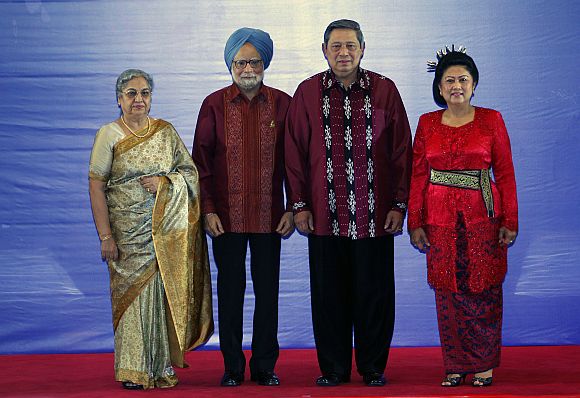