News
Business
Movies
Sports
Cricket
Get Ahead
Money Tips
Shopping
Sign in  |  Create a Rediffmail account
Rediff.com  » News » Modi dubs Congress a 'deal party', says no one can save it

Modi dubs Congress a 'deal party', says no one can save it

The prime minister also accused the Congress of “distorting history” as part of a conspiracy to divide the society. 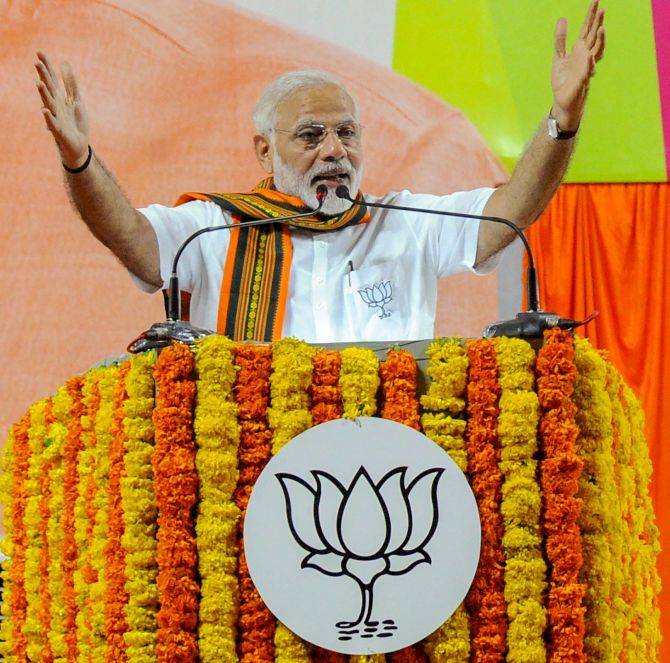 IMAGE: During the rally, the prime minister also said that the Congress was playing with the sentiments of the people of Karnataka. Photograph: PTI Photo

Firing a barrage of barbs at the Congress, Prime Minister Narendra Modi on Sunday labelled it as a “deal party” that was being uprooted from all over the country and said no one can save it now.

Taking the Bharatiya Janata Party’s campaign in poll-bound Karnataka to full throttle, he also accused the Congress of “distorting history” as part of a conspiracy to divide the society.

At poll rallies in Chitradurga and Raichur, he flayed the Congress government led by Siddaramaiah for celebrating the “jayantis of sultans” (birth anniversaries of Muslim rulers) for the sake of “vote bank politics”.

He was apparently referring to the Siddaramaiah government’s controversial decision of celebrating “Tipu Jayanti” every year on November 10, commemorating Tipu Sultan, the legendary 18th century ruler of Mysore.

Modi accused the Congress of protecting the corrupt, adopting a divide-and-rule policy, making false promises and having no agenda other than “abusing Modi.”

Listing out a string of electoral defeats of the Congress, including those in Maharashtra and Tripura, he said, “From every corner of the country, the Congress has gone”.

“...And in Karnataka?” he asked the crowd, which said the Congress will be ousted from power in the southern state as well.

“Now they cannot survive. No one can save the Congress now. For 70 years they have misled and befooled the people,” Modi said, as he continued his campaign blitz across Karnataka where the party is heavily banking on him.

The state goes to polls on May 12. The counting of votes will take place on May 15.

At his rally in Chitradurga, Modi, while referring to corruption charges against a minister without naming him, said, “The Congress is a party that neither has dil (heart) nor is it pro-Dalit. It is a deal party.”

Targeting Chief Minister Siddaramaiah, the prime minister said he always keeps character certificates ready in his suitcase. “Whenever an allegation of corruption against a minister is made, he immediately takes out a character certificate, writes the name and tells the people he is honest.

“The time has come to bid farewell to the Congress party that is not interested in your welfare. Make it a clean sweep for the BJP and send this chief minister home as he only goes around giving clean chits,” Modi told the crowd.

Accusing the Congress of sidelining stalwarts like B R Ambedkar and undivided Congress president and former Karnataka chief minister S Nijalingappa, he said the party was interested in promoting only one family and naming “thousands of schemes” after them.

At Raichur, he said the Congress’ “new mantra is spreading lies”.

The Congress has realised its “vote bank politics is shaken” and, therefore, it has started a campaign for “misleading and spreading lies” among Dalits, and asked them to be aware, Modi said.

The prime minister accused the Congress of not allowing parliament to function because it feared he was “gaining the trust of the people by completing his works successfully one after the other”.

He said the Karnataka elections were a contest between the Congress’ “misdeeds and people’s aspirations”.

“On one side is the BJP with the mantra of ‘sab ka saath sab ka vikaas (together with all development for all). On the other side is the Congress party that believes in doing everything for one family,” he said.

While the BJP was fighting against the corrupt system, the Congress protects the corrupt, he alleged. The BJP was progressing in politics with the “blessings of people”, while the Congress was dividing people, creating rift between brothers and following a divide-and-rule policy, Modi said.

The prime minister asked the Congress to give an account of its work in Karnataka in the last five years.

“From morning till evening they just say Modi, Modi, Modi. Other than abusing Modi in this election is there any agenda for the Congress? The time has come to see off such a Congress party,” he said.

In Chitradurga, attacking the Congress over the “Tipu Jayanti” controversy, Modi said: “Look at the Congress’ character... the birth anniversaries of those need to be celebrated from whom we draw inspiration from generations to generations. They cannot think about celebrating their jayantis”.

He said, “Veera Madakari and Onake Obavva are forgotten, but for the sake of vote bank politics they are into celebrating jayantis of sultans.”

A Dalit woman, Onake Obavva was the legendary wife of a soldier in the army of Madakari Nayaka, the last ruler of Chitrdurga. She is said to have fought single handedly and killed with a pestle several invading soldiers of the army of Hyder Ali, the father of Tipu Sultan, in 1779.

She was killed by Hyder Ali’s soldiers in her valiant effort to protect the fort where her husband was the guard of a watch tower.

Celebration of “Tipu Jayanti” has been strongly opposed by the BJP. While a section of society has hailed Tipu Sultan as a hero who died fighting the British, the others called him a “fanatic” ruler.

“By celebrating this jayanti, the Congress has the insulted people of Karnataka and Chitradurga. They have played with sentiments and feelings of people of Chitradurga,” Modi said. 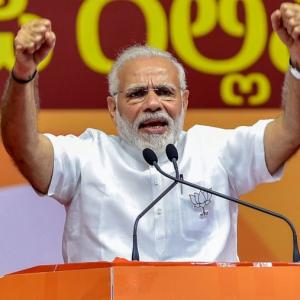 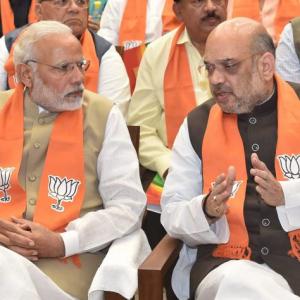