News
Business
Movies
Sports
Cricket
Get Ahead
Money Tips
Shopping
Sign in  |  Create a Rediffmail account
Rediff.com  » News » PM may want third term, but does anybody want him?

PM may want third term, but does anybody want him?

In a politically unstable climate, the prime minister is making it clear that he is still part of the political race. Renu Mittal reports.

Is Prime Minister Dr Manmohan Singh indicating that he is ready for a third term in office?

And is he doing so despite the Congress making it clear on more than one occasion that party Vice-President Rahul Gandhi will be the prime minister if the Congress-led United Progressive Alliance manages to win enough seats in the next general election to form the government at the Centre again?

In response to Rediff.com's question on Thursday evening -- on whether he would accept a request to stand for a third term as the prime ministerial candidate if Congress President Sonia Gandhi and his party requested him to do so -- Dr Singh had said, “These are hypothetical questions. We will cross that bridge when we come to it.”

He was speaking to the media on board Air India One while returning from the BRICS summit in Durban.

The prime minister's not-so-vague answer has created a political stir.

With a general election a year or less away, supporting allies of the UPA coalition are flexing their muscles to wring the maximum benefits from the Centre in terms of financial packages and well-funded central schemes. The government is using all its political leverage and clout to keep its allies together.

In such an unstable political atmosphere, the prime minister is apparently making it clear that he is still very much part of the political race.

On earlier occasions, Dr Singh had made it clear that it was up to the party and its leadership to decide if he would be prime minister again.

During the same media interaction, Dr Singh had said it was up to the people of India to judge his performance as prime minister.

What Dr Singh meant by his cryptic statement -- without elaborating it in as many words -- was if the people give the Congress and the UPA another shot at power, then he may consider taking a decision about remaining prime minister for a third term.

The Congress party appears to have been taken aback by this comment.

Information and Broadcasting Minister Manish Tewari and Minister of State for Parliamentary Affairs Rajiv Shukla have pointed out that Dr Singh did not exactly say that he wanted to be prime minister again.

"In my view, he was responding to a pointed question. And what did he say? He only said, ‘We will decide how to cross the bridge when we come to it’," Shukla said, adding that the media was ascribing multiple interpretations to Dr Singh's remark.

The Bharatiya Janata Party was quick to sense the unease within the Congress.

BJP spokesperson Ravishankar Prasad remarked, "Whether the comment of Manmohan Singh is aimed more at his foes in the party or it puts a question mark on Rahul Gandhi’s claim for the post of prime minister, for which a consistent chorus is going on within the Congress, is entirely the internal matter of the party.”

Just two days ago, Congress spokesperson Rashid Alvi had made it clear that 'only' a Gandhi would be prime minister if the Congress returned to power.

Party leaders have tried to refute the impression that Gandhi was not interested in taking over the prime minister's post.

Party spokespersons have repeatedly claimed that Gandhi does not hanker either after power or the prime ministership; his priority is to strengthen the Congress party and its organisational structure.

At the same time, Congress leaders insist, this does not mean Gandhi will not become prime minister if the UPA won a third consecutive term in power.

The BJP has attacked Dr Singh for his comment, saying it exposes his 'audacious ambitions'.

Rising prices and corruption have been the hallmarks of Dr Singh’s prime ministership, BJP leaders say, adding that India does not want to see him as prime minister again.

Meanwhile, Samajwadi Party chief Mulayam Singh Yadav has been blowing hot and cold since the Dravida Munnetra Kazhagam withdrew support from the UPA over the Sri Lankan Tamils issue.

Upset that the Centre is planning to grant special status to Bihar, and not the Samajwadi Party-ruled Uttar Pradesh, Yadav has threatened to withdraw support his party's Members of Parliament provide to the UPA.

But he changed his tune on Friday when Finance Minister P Chidambaram praised UP Chief Minister Akhilesh Yadav for good governance and promised centrally funded schemes for the state.

Whether the Congress made any other promises to Mulayam Singh is not known, but it is interesting to note that he has drastically altered his earlier fiery stance. On Friday afternoon, he announced that his party had no intention of pulling the plug on the UPA.

In an era of coalition politics, the Congress has shown its willingness to win over new allies and keep them by its side, either with the help of the probe-happy Central Bureau of Investigation (as Mulayam Singh is so fond of mentioning) or by offering huge packages, while older allies walk out of the ruling alliance.

Interestingly, Trinamool Congress chief and West Bengal Chief Minister Mamata Banerjee, who withdrew support to the UPA over her opposition to the introduction of Foreign Direct Investment in the retail sector, has once again reached out to the Congress.

Banerjee is apparently not keen about the Trinamool contesting the next election alone and needs an ally to keep the Communists at bay in West Bengal.

Anticipating this bon homie, the Left Front has stated that if the BJP can dump its Hindutva agenda, it would be possible for the party to reach the majority mark in the next election.

Although this is not a remote possibility in today’s political climate -- the BJP will never give up its Hindutva ideology and the Left Front will never accept the ‘saffron party’ -- India is living in interesting times, where no alliance forged for the sake of power can be ruled out.

Congress President Sonia Gandhi’s thoughts about a third term for Dr Singh -- or about when to ask him to wind up his government and call an election -- is anybody’s guess. 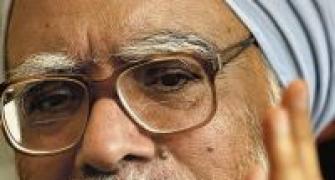 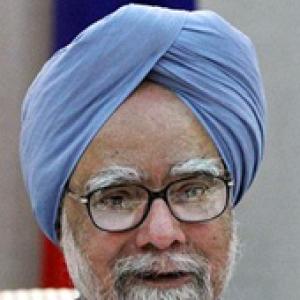