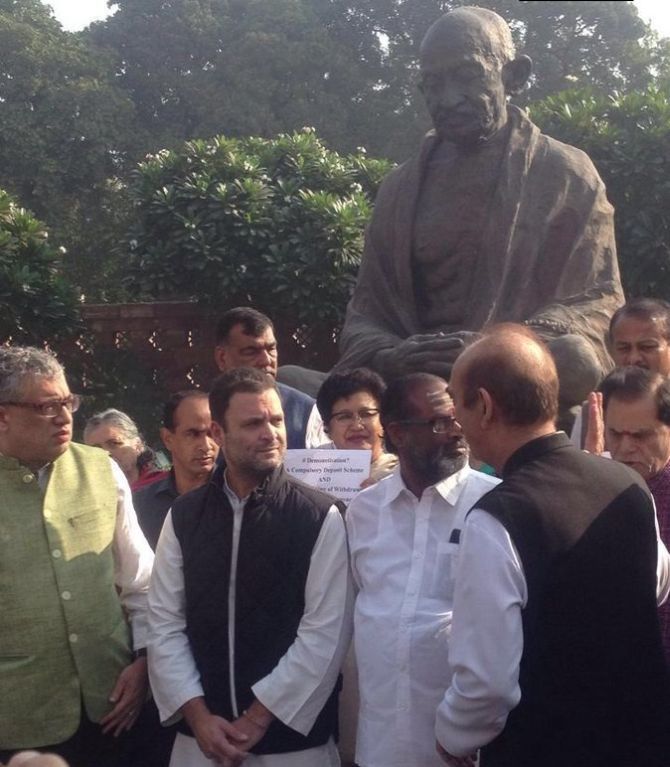 Opposition parties on Wednesday came together to protest against demonetisation outside Parliament, with Congress vice president Rahul Gandhi describing it as the world’s ‘biggest impromptu financial experiment’ and said they are firm on their demand for a Joint Parliamentary Committee probe into the ‘scam’.

With a united opposition protesting and almost 200 MPs from various parties participating in the discussion, the prime minister should explain in Parliament why he took such a decision and why he ‘leaked’ the decision to his industrialist friends and Bharatiya Janata Party leaders, he said.

“What the PM has done is the biggest impromptu financial experiment in the world. He did not ask anyone. The (Union) finance minister did not know. The chief economic adviser did not know. This decision is not that of Finance Minister. This is the prime minister’s decision.

“The prime minister can give lectures to pop concert where ‘naach gaana’ is going on. 200 MPs are saying they want to tell the nation why he took this decision. The PM does not want to come to Parliament. Why is the PM afraid of going inside? He is obviously anxious about something,” Gandhi said.

“Our demand is that the PM represents the country and he should come to Parliament and sit through the entire debate and hear us out and the other opposition leaders.

“We feel there is a scam behind this decision. We feel he informed his own people before and the opposition is firm that it wants a JPC,” he said.

Gandhi said a cent percent united opposition was standing outside Parliament and the entire opposition is united, over 200 MPs are standing and the prime minister should tell why he has taken this decision.

He said all opposition parties, the Congress party and everybody is for fighting corruption and black money.

The question is, Gandhi said, why are one billion people being ‘harassed’ in this manner.

“That’s the question. It is a question of complete centralisation of power. I have been saying that the country cannot be run in this manner.

“You have hit the economy, which was running fine. But it is not running the way it was running during the UPA (United Progressive Alliance government), but it was somehow running. You have hit it hard,” he said.

He added that the decision has hit the fishermen in Bengal and Kerala and other places, it has finished farmers, labourers.

“Is there any suited-booted person standing in the line or any BJP (Bharatiya Janata Party) MLA, MP in the line? Don’t they not need money?” he said attacking the government.

He said Parliament should condole the death of people who died standing in queues outside banks and ATMs.

“It is shame there is no time to condole the death of those who died in the queue. First day there was a condolence but these people’s names were not mentioned.”

Asked about Finance Minister Arun Jaitley’s comment that the Congress should make up its mind about whether or not BJP leadership knew of the decision in advance, Gandhi said, “Ahead of this decision, bank deposits surged drastically. BJP’s organisation in Bengal and other states knew of it. The FM did not know but the BJP organisation knew. BJP’s industrialist friends knew.”

Asked who is leading the protest, Rahul said poor people’s voice is leading this protest and MPs are representing that voice.

IMAGE: Leaders of opposition parties gather in front of the Gandhi statue in Parliament premises to protest against demonetisation on Wednesday morning. Photograph: ANI