Prime Minister Narendra Modi on Tuesday joined over 30,000 people in Chandigarh for the second International Yoga Day celebrations as he pitched for treating diseases like diabetes through the ancient spiritual discipline.

Modi, dressed in a white-coloured t-shirt and trouser along with a scarf, led over 30,000 participants, including defence forces personnel and school children, for the second International Day of Yoga celebrations here at the Capitol Complex amid tight security.

The prime minister, who arrived in Chandigarh last night, participated in a mass demonstration of 'Common Yoga Protocol'. A yoga enthusiast himself, he performed yoga asanas along with the people at the event. 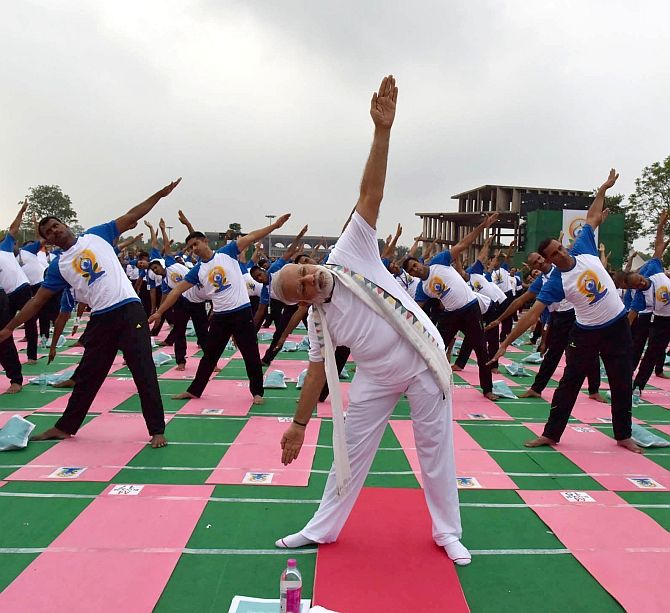 "I want to request trainers who are associated with yoga, from this public platform. From next year when we celebrate yoga day, in this one year, you continue to do what you do for yoga but focus on one subject and this is my subject -- diabetes -- Diabetes and yoga," he said.

"All people belonging to the yoga field, whatever knowledge they have, they must continue with the rest of their yoga activities but this (diabetes) must be the main focus," Modi said.

Expressing concern over rising number of patients suffering from diabetes, Modi asked yoga trainers to help in controlling the disease. 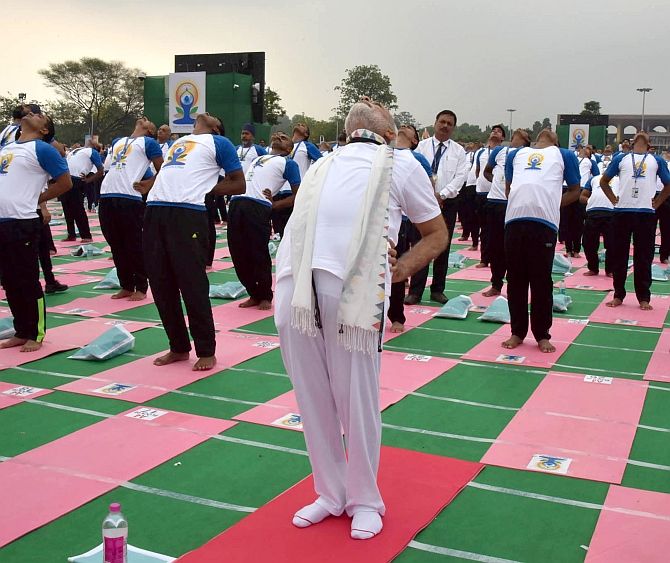 "It will be an achievement if we can help in treating diabetes. From next year, we can take another disease. But I want that for good health, we should address any one disease every year. We should run a public campaign with an aim to address one disease," he said.

Yoga is not only a way to get rid of a disease but it also guarantees wellness. For holistic development of lives, yoga is a great way, he said.

"India has given invaluable heritage to the world as we celebrate the second International Yoga Day. The world has accepted it in their way. Today from Indian government side, I am going to announce two awards. Next year, when yoga day will be celebrated on June 21, then from India, there will be a selection for two awards," Modi said. 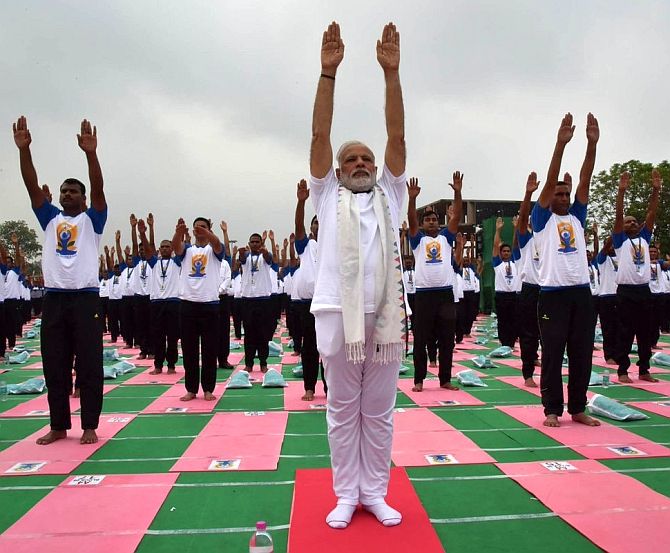 After performing Yoga, the prime minister mingled with the people at the event, some of whom even took selfies with him. He also met handicapped participants during the event.

Further asserting that some people do not understand the science behind Yoga, the prime minister said that the disciple was not a religious practice and was the path to salvation, adding that it provides health insurance for zero budget.

"Yoga is for the believer and non believer as well. It does not differentiate between the rich and poor or the literate and illiterate. Just like the cell phone has become a part of your daily life, I call on the world to embrace Yoga," he said.

The prime minister also said that it needs to be ensured that while Yoga spreads across the globe as a popular practice, its sanctity is maintained, adding that it must not be dragged into any controversies either. 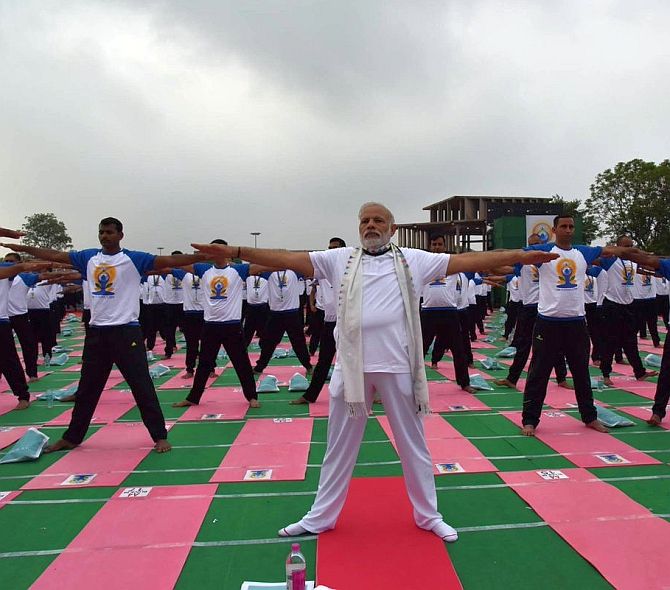 Talking about Yoga as a roaring business success, he said that the form was gaining popularity as a major business and profession as well and that the demand for Yoga trainers across the globe was growing every day.

Elaborate arrangements had been put in place to ensure a smooth performance, officials said.

The Capitol complex was divided into 8 blocks where 500 master trainers along with their team members performed asanas.

Several LED screens were put up at the venue, where 300 bio-toilets and 30,000 mats had been put in place.

Tight security arrangements were made with more than 5,000 police and paramilitary personnel keeping a vigil at the venue.  Private vehicles were also barred from going near the venue. 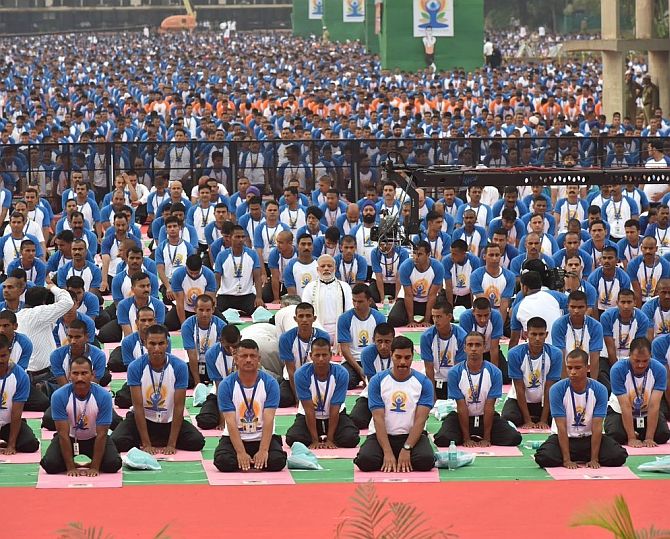 The prime minister stressed that yoga was not about taking or receiving but about a healthy body.

“Sometimes, people cannot understand it (Yoga) fully because of their lesser ability to understand it. This science is not for taking and receiving. Yoga is not for what one gets, yoga is what I can give and how I can get relief from different things, it is way to get mukti (salvation).

“All religions, communities etc. emphasise on what we will get after death in parlok (heaven). They say if you pray this way, then you will get this thing in parlok. Yoga is not for parlok,” he said.

The PM said yoga is a science for life and not a religious activity.

“Therefore, Yoga gives training to help body, mind, intelligence, spirit working in a synchronrised way. If we see ourselves, if we walk or not, we may be alert or lazy, our body can be anything. But our mind can never be stable,” Modi said.

The PM said countries like India can save on their healht budget by adopting preventive healthcare measures like yoga.

“Therefore, it is necessary to connect Yoga with life. I request all people, to know yourself, to increase your capability, do not wait and make Yoga part of your life. The way mobile has become a part of everyday life, you can make yoga a part of your life easily. It is not a difficult job,” he said.

“There is no health insurance in world with zero budget. But yoga provides health assurance in zero budget. Yoga does not understand difference between rich and poor, intelligent and illiterate, even poorest of poor and richest of rich can perform yoga easily,” he said.

“Mind is unstable and body is stable. It is Yoga which shows how to keep your mind stable and make our body moving...If this is balanced, then our body can become committed to achieve our aims in our lives. Yoga is meant for both believer and non believer,” he said.

Urging people not to put Yoga into any controversy, Modi stressed upon people to adopt Yoga for good life.

“You must have seen, gynaecologists request pregnant women to do Yoga. They send them to Yoga trainers. As time goes by, we have become very busy...We have become cut off from ourselves. Yoga unites us with ourselves.

“Without putting Yoga in any controversy I want, for benefit of the masses, we should connect with Yoga. To unite with yourself, yoga is the great way, I am confident that we will move ahead in this path,” he said.

Modi noted that all countries across the world were associated with Yoga Day celebrations.

“Through United Nations, International Yoga day is being celebrated throughout the world. The whole world supported it whether it was developed or developing nations. Every section of the society supported it.

“There are several days celebrated by UN including World Cancer Day, World Health Day, World Mental Health Day, and several others. In the field of sports, there are several days which are celebrated. But this (IDY) is the only, which has direct relation with health and also with physical, mental and social health,” he said adding, “I think, this speaks about the power of this heritage, identity of this heritage which was given by our ancestors.” 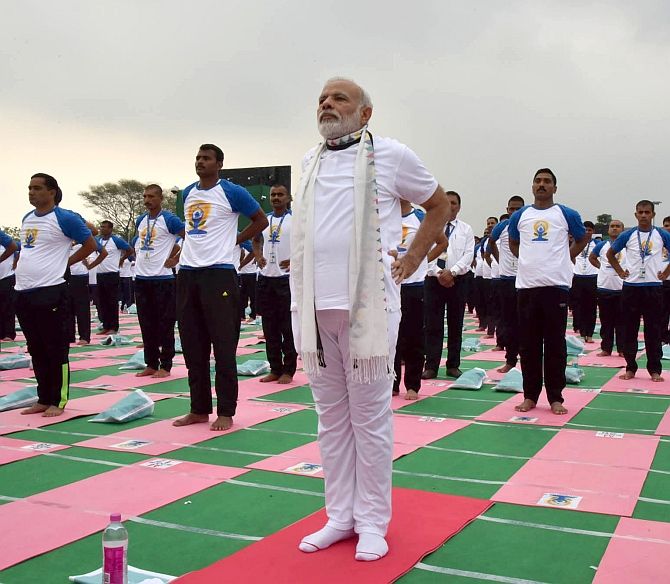 The prime minister also noted that Yoga has turned into a ‘very big business’ and has been offering job opportunities for youth.

In his nearly 25 minute address, he said the Centre was working in the direction of fixing protocols and norms for promoting Yoga across the world.

Before performing Yoga asanas himself, the prime minister first met the physically challenged and then walked around surveying people performing asanas.

Towards the end, Modi freely mingled with the participants, who surrounded him and took the opportunity to take selfies with the PM.

Over 30,000 people from all ages -- 10,000 each from Chandigarh, Punjab and Haryana -- performed yogasanas on pink, red and blue coloured mats during the function.

Separately, about 10,000 people also performed yoga at over 100 other locations in Chandigarh itself.

Pointing to Punjab Chief Minister Parkash Singh Badal who was seated on the dais, Modi said, “I was asking Badal sahib whether he had seen such good use of this (Capitol) Complex before.”

The PM also reminded people of his association with Chandigarh.

“I used to live in Chandigarh, I stayed here for five years (in the 1990s)...When it was proposed that the event be held in Chandigarh, I said there is no better place than this Complex to hold the mega event,” he said.

“And I am very happy to see best use of this place,” said Modi.

On the occasion, the PM was presented with a replica of ‘Surya Namaskar’ by Governor Kaptan Singh Solanki.

“We had prepared this replica, depicting Surya Namaskar asana, which was given by the governor to Modiji,” Saini said.

For the main event, the emphasis this year was on participation of divyangs, the term coined by the PM for the physically challenged. For the first time, 150 divyangs were assisted in performing yogasanas at the Capitol Complex.

The Capitol complex was divided into 8 blocks where 500 master trainers along with their team members performed.

LED screens were put up at the venue, besides 300 pre-fabricated bio-toilets and over 300 dustbins and 30,000 mats were used on the occasion. Tight security arrangements were put in place with over 5,000 police and paramilitary personnel securing the venue.

Private vehicles were barred from going near the venue. 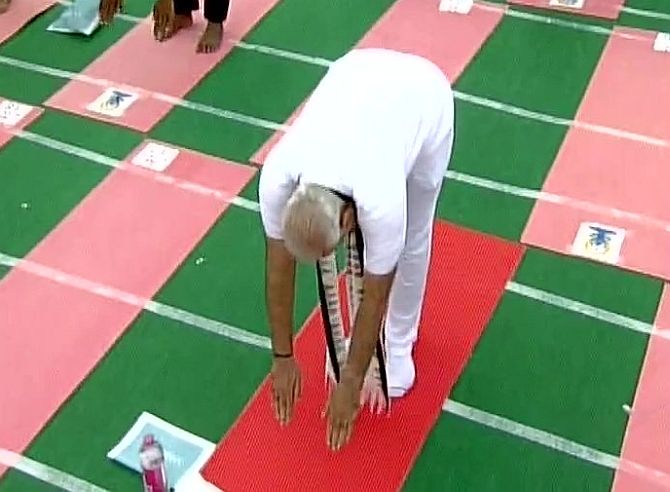 On Monday, rains had lashed Chandigarh which drenched some areas where participants had to perform the asanas.

Solanki, in his address, said, “We are very fortunate that second edition of International Yoga Day is being celebrated here (in Chandigarh).”

He talked about how International Yoga Day is now being celebrated around the world and thanked efforts made by the PM in this regard.

He also said that Yoga celebrations had helped build a bond amongst people who may belong to various castes and regions etc.

Solanki also made a mention of the second phase of Jat quota agitation dharna which had ended two days ago in Haryana.

“In Haryana, a dharna which had been going on as a part of the agitation too came to an end yesterday (On Monday). They too made an announcement that they will not hold dharna,” Solanki said, referring to how everyone had come forward and cooperated to make the Yoga Day event a success.

Solanki also thanked Punjab government for its efforts in making the event a success.

He also said that a series of events were held in Chandigarh before the mega event.

Even though over 30,000 people participated in Tuesday’s event, online registration for the mega event had touched nearly one lakh, Solanki said in his speech on the occasion in Chandigarh. 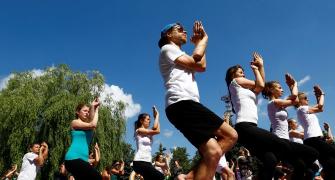 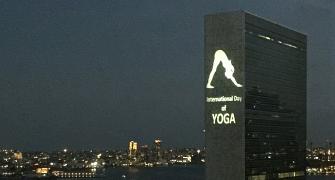 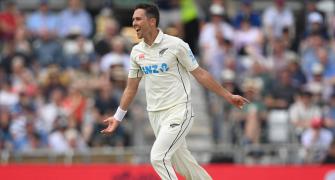 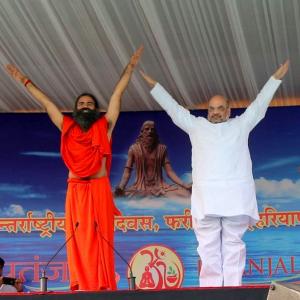 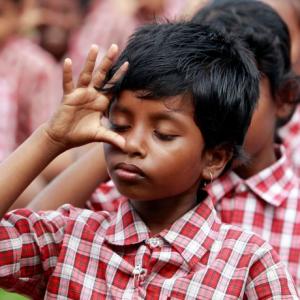