In a rare, benevolent gesture, two Supreme Court judges on Monday sang at a cultural programme organised by apex court journalists in Delhi to raise money for relief and rehabilitation of people in flood-ravaged Kerala. 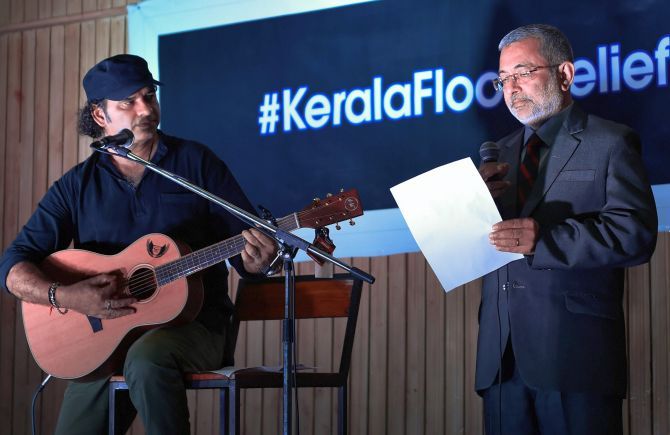 Justices Kurian Joseph and K M Joseph, both hailing from Kerala, performed at the event at the auditorium of Indian Society for International Law, opposite the Supreme Court complex.

The programme was attended by Chief Justice of India Dipak Misra and several apex court and Delhi high court judges.

The CJI said it was a consolidated effort for a cause.

"Some may feel that this is a celebration because there are certain performances, but I would like to say this is a consolidated effort of finding energy to raise contribution for a noble cause," Justice Misra said.

Justice K M Joseph, who was recently elevated to the apex court, sang a song from a classic Malayalam movie Amaram, which tells the story of a fisherman.

"Fishermen were the first to react when the state was reeling under severe floods. This song is a tribute to them," he said.

More than Rs 10 lakh was collected during Monday's event.

A few journalists also performed during the event. IMAGE: Justice K M Joseph, who was recently elevated to the apex court, sang a song from a classic Malayalam movie Amaram, which tells the story of a fisherman. Photograph: Ravi Choudhary/PTI Photo

The apex court staff has donated one day's salary.

Former Attorney General Mukul Rohatgi has announced a contribution of Rs 50 lakh to the flood-ravaged state. 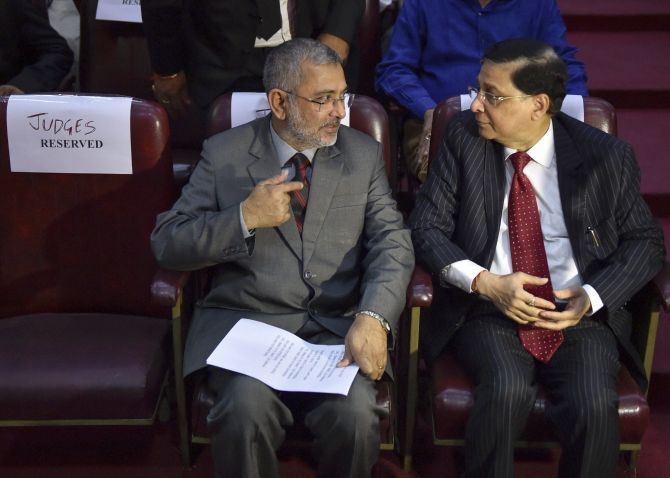 Justice Kurian Joseph has remained active in ensuring and arranging relief materials. He had taken part in a drive in support of lawyers collecting supplies at a collection point near the apex court.

He had also contributed a significant amount for flood relief activities for Kerala. On August 16, the Supreme Court Bar Association has donated Rs 30 lakh from its Calamity Relief Fund.

The deadliest deluge in Kerala in nearly a century has claimed more than 300 lives since August 8.

According to the home ministry's National Emergency Response Centre, 443 people have died in Kerala and 54.11 lakh have been severely affected in 14 districts this monsoon season.

Kerala has been receiving financial aid from various state governments across the country.