Over 60 per cent of the 1.41 crore voters on Wednesday exercised their franchise in the seventh and last phase of the Uttar Pradesh assembly polls in 40 seats, bringing down the curtain on a gruelling two-month-long process. 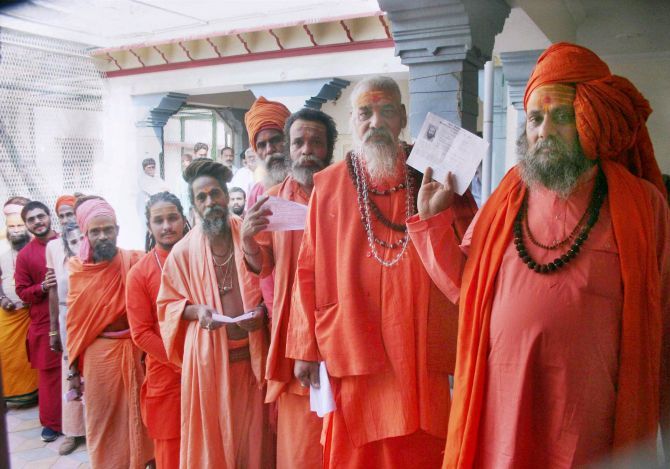 IMAGE: Sadhus of the Juna Akhara show their voting cards before casting their vote at a polling booth in Varanasi during the seventh and final phase of the Uttar Pradesh polls. All Photographs: PTI Photo

Wednesday's exercise passed off by and large peacefully and no untoward incident was reported from the three constituencies in the Naxal-affected districts of Sonbhadra, Mirzapur and Chandauli. Poll percentage in these areas was Chakia 59, Duddhi 62 and Robertsganj 58. All eyes were on the Assembly segments in Prime Minister Narendra Modi's Lok Sabha constituency Varanasi, where the turnout was 60.95 per cent till 5 pm.

Polling started amidst tight security arrangements in seven districts and gained momentum as the day advanced.

Ghazipur, Jaunpur and Bhadoi are the other districts where polling was held.

Voting concluded at 5 pm in all constituencies, barring the Naxal-hit areas where it ended at 4 pm.

Singh, however, denied the charge. IMAGE: An elderly woman is carried after she cast her vote at a polling station.

The counting of votes in UP will be taken up on March 11, along with four other states -- Uttarakhand, Punjab, Goa and Manipur, where Assembly polls were held. Among the voters in this phase polling in UP, 64.76 lakh were women.

14,458 polling booths were set up for today's exercise which will decide the fate of 585 candidates, including 51 women.

The BJP contested 32 seats and its allies -- the Apna Dal and the Suheldev Bharatiya Samaj Party -- fought in four seats each.

The Bahujan samaj Party fielded its nominees for all seats.

While the Samajwadi Party contested 31 seats, its ally the Congress is in the race for the remaining seats. IMAGE: People line up to vote at a polling station in Mirzapur. 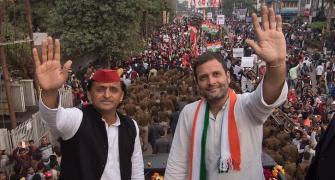 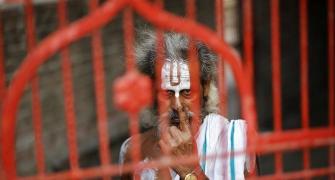