Protesters pelted police with stones and the latter hit right back with vengeance wielding batons with telling effect, leaving many fallen and writhing in pain on the road. 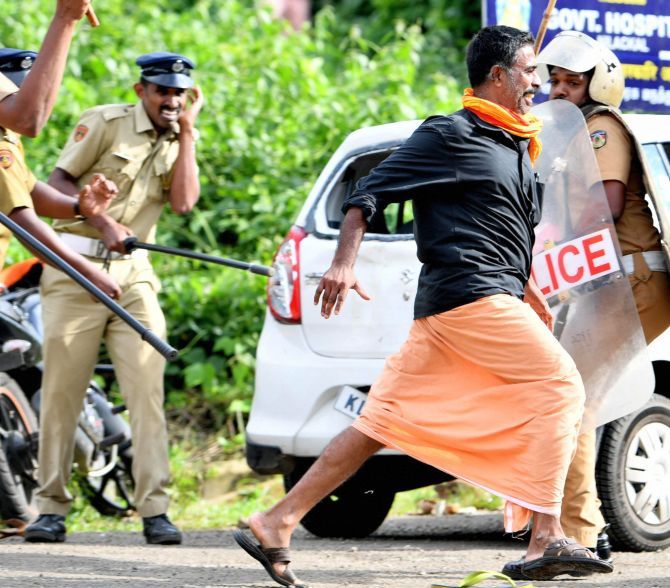 IMAGE: Police chase away a protester after they opposed the entry of girls and women of menstrual age into the Sabarimala temple. Photograph: PTI Photo

The iron gates of Sabarimala temple opened on Wednesday evening for the first time since the Supreme Court allowed women of menstrual age to enter the shrine but by all indications none from the “banned” age group could make it to its hallowed precincts amid a welter of protests and violent clashes. IMAGE: Devotees, including women, outside the Lord Ayyappa Temple on its opening day in Sabarimala, Kerala. Photograph: PTI Photo 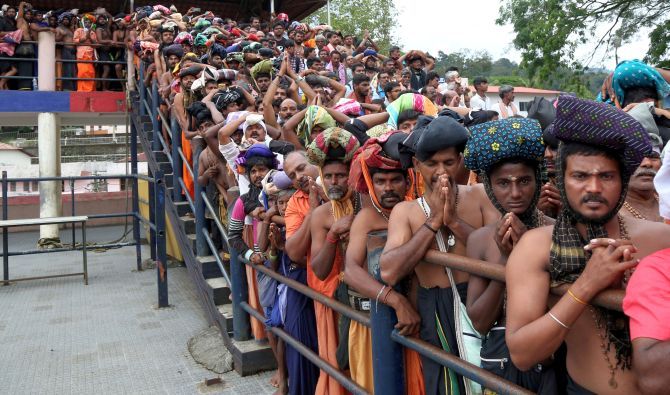 IMAGE: Devotees wait in queues inside the premises of the Sabarimala temple in Pathanamthitta district of Kerala. Photograph: Sivaram V/Reuters

Chaos and mayhem ruled supreme on the road leading from Nilackal, the gateway to the shrine, to Pamba in the foothills from where the devotees start the arduous trek to Sabarimala, as activists of Hindu fringe groups fought pitched battles with police, leaving many injured and bleeding.

Incensed over Kerala’s Left Front government’s decision not to file a review plea against the Supreme Court’s September 28 landmark order, protesters pelted police with stones and the latter hit right back with vengeance wielding batons with telling effect, leaving many fallen and writhing in pain on the road.

Several protesters were seen being bundled into police vehicles, while siren blaring ambulances carried some to hospitals. IMAGE: Police escort Madhavi (of Andhra Pradesh) and her family members after she was heckled by the protesters while she was seeking the entry to the Lord Ayyappa Temple on its opening day in Sabarimala, Kerala. Photograph:PTI Photo

Simmering tension prevailing in Nilackal since morning erupted into raucous rowdy behaviour as scores of activists of fringe groups heckled women journalists of at least four national TV channels and vandalised their vehicles.

National TV showed protesters wearing black and saffron turbans running after their cars, violently pounding and kicking the vehicles in a bid to stop them from proceeding to Pamba from Nilackal on way to Sabarimala.

At least 10 people from the media, including reporters and photojournalists, were injured and equipment of several of them damaged, senior minister E P Jayarajan said.

Denouncing the attacks on media, he said cases were being registered against the suspects under sections relating to non-bailable offences. IMAGE: An elderly woman on her way to Sabarimala Temple as police personnel stand on guard, in Pathanamthitta, Wednesday, Oct 17, 2018. Sabarimala Temple is open to women of all age groups for the first time since Supreme Court announced its verdict. Photograph: PTI Photo

Unfazed by the unfolding violence, Madhavi, a gutsy woman from Andhra Pradesh in her 40s, tried to climb the Sabarimala hills to reach the Lord Ayyappa temple but was
forced to return to Pamba, menaced by agitated male devotees.

Liby, a woman from Kerala’s Alappuzha, also in the “banned” age group, was prevented from proceeding to Sabarimala at Pathanamthitta bus terminal. She was escorted to safety by police. 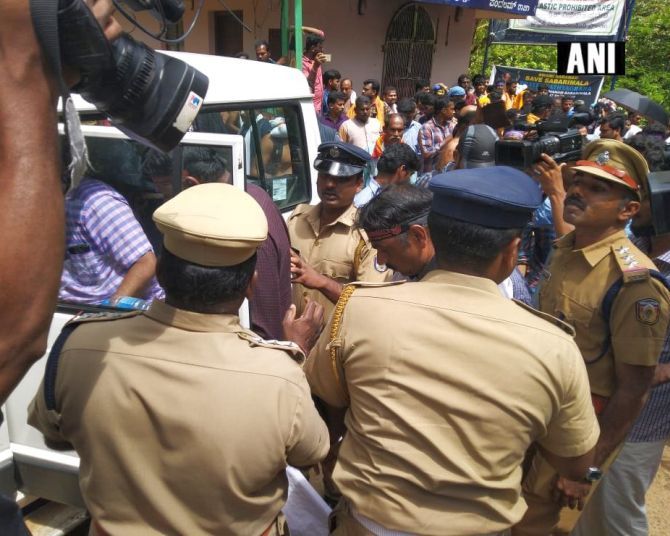 IMAGE: Police detain devotees protesting against the entry of women in the age group of 10-50 women to Kerala's Sabarimala Temple. Photograph: ANI

Both the Congress, the main opposition party in Kerala, and the Bharatiya Janata Party, which is desperately seeking to expand its footprint in the state, have lent supprt to the agitation against the Supreme Court verdict. IMAGE: A policeman throws back a stone as they clash with protesters after they opposed the entry of girls and women of menstrual age into the hill shrine of Lord Ayyappa Temple in Sabarimala. Photograph: PTI Photo

Surendran, who reviewed the situation and preparations for the three-month-long Mandalam-Makaravilakku-festival beginning November 17 at Sannidhanam (Sabarimala temple complex), said the government would tackle the agitation politically.

“The BJP-RSS are trying to create tension and destroy the peaceful atmosphere in Kerala for political gain. We know the agenda of the RSS and BJP very well,” he said, and insisted the government did not want any confrontation with believers. IMAGE: Women protesters check Sabarimala bound vehicles at Nilakkal to ensure that no women in the age group between 10 and 50 are going to Lord Ayyappa temple in dense forests at Sabarimala. Photograph: PTI Photo

The BJP rejected the allegation, saying the government was responsible for the “collapse” of law and order.

Party leader and MP V Muraleedharan said the government should shed its stubbornness and respect the sentiments of the people of Kerala.

Congress leader Ramesh Chennithala blamed both the ruling Communist Party of India-Marxist and the BJP-RSS combine for violence. Even as streets in Nilackal and Pamba erupted in tumult, thousands of bare-chested Ayyappa devotees waited patiently in the vast concourse outside Sabarimala for its gates to open at the appointed hour--5 pm.

Carrying “Irumudikettu” (the sacred bundle containing ghee-filled coconuts they offer to the deity), they calmly walked past security personnel to take their place in the long queue where they would wait for hours on end for a glimpse of Lord Ayyappa.

Though older women and very young girls could be seen in the crowd, none of menstrual age was spotted.

“No girl or woman in the age group of 10 and 50 has so far visited Sannidhanam (the temple complex) so far,” a senior official of the Travancore Devaswom Board, the body which manages the shrine, said wishing not to be named.

The shrine will remain open for the 5-day monthly pooja during the Malayalam month of Thulam before being closed on October 22.

The BJP and its NDA partners have backed a 12-hour ‘hartal’ called by Sabarimkala Action Council to protest the police action against devotees. The Congress said it would not join the strike but hold protest demonstrations across the state on Thursday.