Prime Minister Narednra Modi's temple run in Nepal continued for the second day on Saturday as he visited Mukhtinath temple and Pashupatinath temple.

Here are the highlights of Modi’s second day in Nepal. IMAGE: Prime Minister Narendra Modi began his Day 2 in Nepal by offering prayers at iconic Muktinath temple that is regarded sacred by both Hindus and Buddhists. Modi also became the first world leader to pay homage at the main sanctum of Muktinath temple. Photograph: @narendramodi/Twitter IMAGE: At the Muktinath temple, Modi was accorded a warm welcome by the people of the remote Himalayan region. He spent nearly half an hour in the temple. Photograph: @narendramodi/Twitter IMAGE: Modi also took the holy water from 108 stone watertaps in the temple premises and took pradakshina by circumambulating around the holy temple. Photograph: @narendramodi/Twitter IMAGE: After offering prayers at the Pashupatinath temple, Modi signed the visitor's book and was presented with a miniature replica of the temple. "Jai Pashupatinath! Feeling blessed after praying at the majestic Pashupatinath Temple in Kathmandu," Modi said in a tweet. Photograph: ANI IMAGE: After temple hopping, the prime minister interacted with a delegation from the Nepali Congress. Photograph: @PMOIndia/Twitter IMAGE: At a civic reception programme, Kathmandu Mayor Bidya Sundar Shakya presented symbolic key of the city to PM Modi, which symbolises that the door to Kathmandu would always remain open to him. Photograph: @PIB_India/Twitter 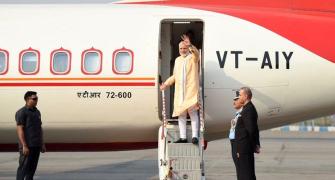 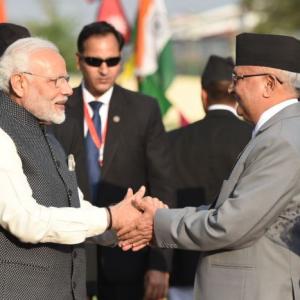