Prime Minister Narendra Modi on Thursday  commissioned the first Scorpene class submarine Kalvari into the Indian Navy, saying it was an excellent example of the government’s ‘Make in India’ initiative and a “big step” in the country’s defence preparedness. 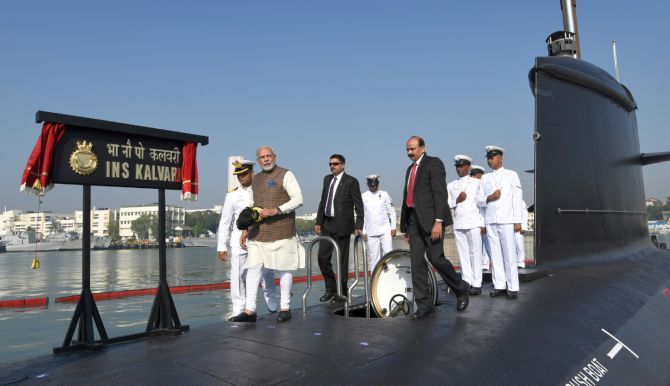 Modi boarded the submarine and unveiled its plaque, after meeting veterans of the first Kalvari who were present at the commissioning ceremony.

He said the last three years (of Bharatiya Janata Party rule) have seen a “beginning of change” in defence and security-linked ecosystem.

“Countries now want to be with India on the road of peace and stability. A strong India has an important role for entire humanity, he said at the commissioning ceremony of the submarine at the Naval dockyard in Mumbai.

“Kalvari is an excellent example of our ‘Make in India’ programme,” he said.

Modi thanked France for this ‘strategic joint project’ and described the commissioning of the submarine as a “matter of pride” for 125 crore Indians.

“It is a matter of pride for me to commission this submarine. Kalvari’s induction in the navy is a big step in defence preparedness,” Modi said.

Kalvari is named after the dreaded tiger shark, a deadly deep sea predator of the Indian Ocean.

“The power of Kalvari, that of a tiger shark, will strengthen our navy,” the prime minister said.

He said India has always been the first responder in times of crisis for neighbours, be it floods, water shortage or cyclones, in Sri Lanka, Maldives or Bangladesh. 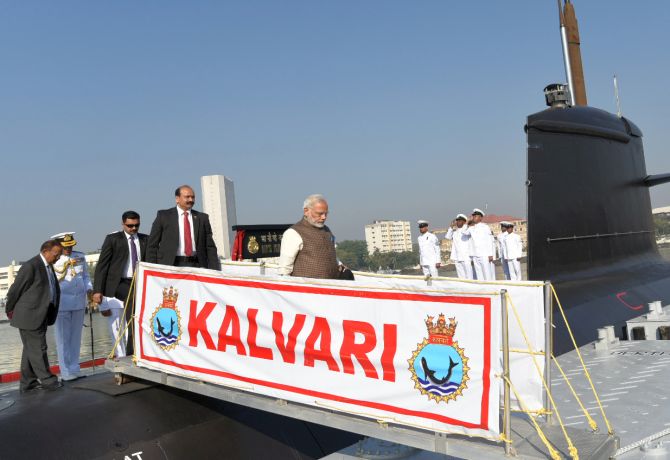 The prime minister said India has made its contribution in tackling challenges like piracy, drug smuggling or illegal fishing.

“The effect of security policies of our government is seen not only on the external but also the internal security. You all know how terrorism has been used for a proxy war against India,” he said.

Reaffirming the government’s ‘mantra’ of “sabka saath sabka vikas”, he said India treats the entire world as its family and discharges its global responsibilities.

Noting that the Indian Ocean has helped India in its relations with other nations, he said it is now giving the country more strength.

“Hind Mahasagar has an important place in this government, in our schemes and policy-making,” Modi said. “I call it (Indian Ocean) with a special name - S. A.G. A. R. meaning the ‘security and growth for all in the region,” he said. 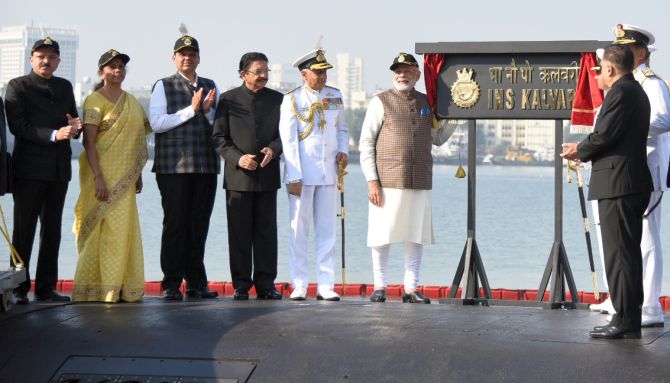 He said the government is fully alert to the country’s global strategic and economic interests in the Indian Ocean region. That is why the modern and multi-dimensional Indian Navy is at the forefront of securing peace and security in the region, Modi stressed.

“India is serious about tackling challenges which confront not only us but various countries in the Hind Mahasagar region,” he added.

Modi also spoke about the increasing maritime partnership between India and other countries.

“Our speciality is the human face of Indian diplomacy and Indian defence technology,” Modi said.

“Almost 12 lakh man-days have gone into the production of Kalvari and the technical skill set which we have acquired is an asset for us,” Modi said. 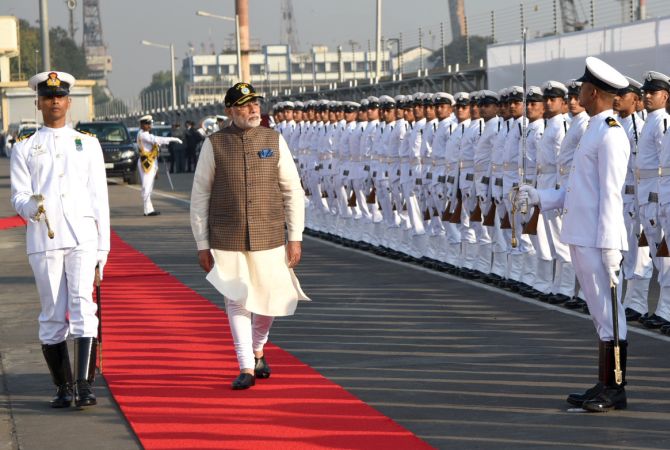 On the issue of ‘One Rank One Pension, he said, “It was because of our commitment that the one rank one pension demand, which was pending since decades, is now a reality.”

“India has proven its capability to build submarines for the past 25 years. These are highly significant steps in the direction of ‘Make in India’ and ‘Skill India’. Making submarines benefits industry not only by itself through orders but also through stringent quality control,” she said.

The submarines, designed by French naval defence and energy company DCNS, are being built by Mazagon Dock Limited in Mumbai as part of Project-75 of the Indian Navy.

“The technology utilised in the Scorpene has ensured superior stealth features such as advanced acoustic silencing techniques, low radiated noise levels, hydro-dynamically optimised shape and the ability to launch a crippling attack on the enemy using precision guided weapons,” an official of the MDL said.

The first Kalvari, commissioned on December 8, 1967, was also the first submarine of the Indian Navy. It was decommissioned on May 31, 1996 after nearly three decades of service. 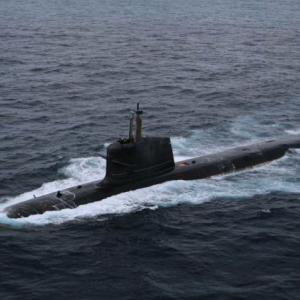