People are risking their lives to take selfies with Hawaii volcano

Is it even an official disaster if you don’t document it on social media?

That seems to be the problem in Hawaii as officials are frustrated with people risking their lives all for a selfie.

Hawaii’s Kilauea volcano has been spewing lava ever since it started erupting on May 3. More than 1,700 local residents have been evacuated from the volcano’s East Rift Zone on the Big Island of Hawaii, where lava from 20 fissure vents has destroyed 26 homes.

And even now, people can’t stop taking selfies with the dangerous volcano and posting them on social media. 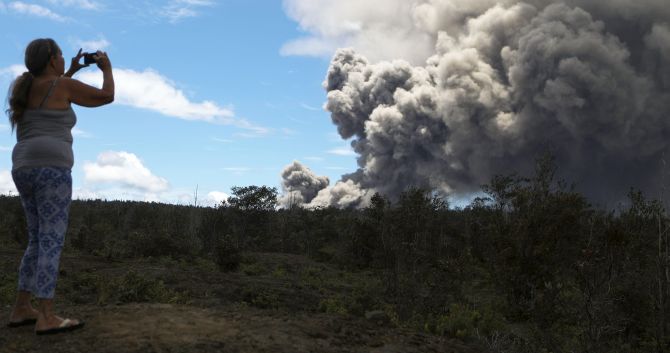 Hawaii fire department officials are frustrated as people are flocking the dangerous sites all for a selfie. “We’ve had no injuries, which is the good news,” Richmond said. “Everybody is on standby. It’s a dicey situation and no one knows how long it will last and how it will end, just dealing with Mother Nature," said Alan Richmond, spokesman for the Hawaii Police Department. Photograph: Mario Tama/Getty Images 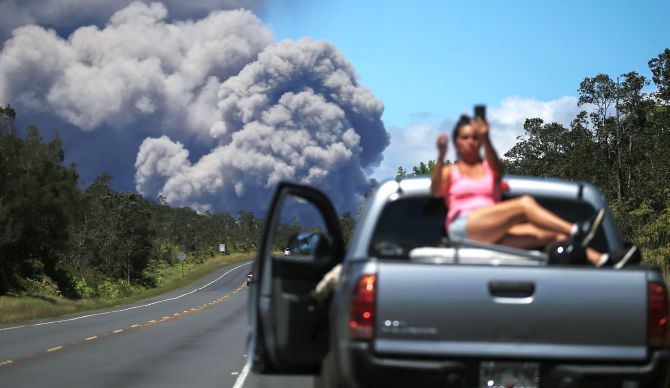 Dangerous? Who cares! This woman takes the time out to pose on her car before taking a selfie with the volcani ash spewing out in the background. Photograph: Mario Tama/Getty Images 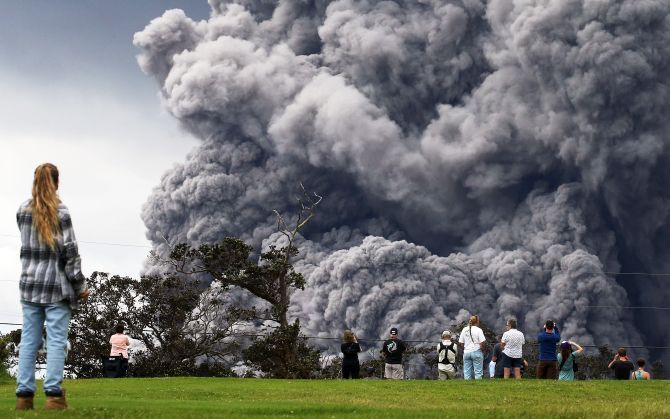 Authorities say the volcano, which has been erupting for 11 days, has produced nearly 20 active lava fissures. Photograph: Mario Tama/Getty Images 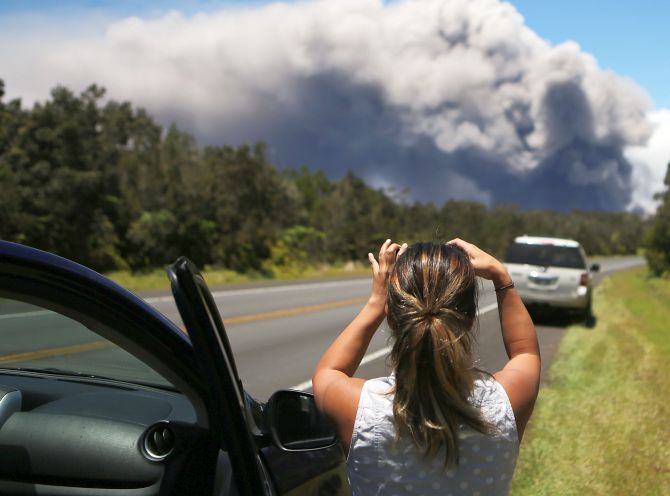 Despite people tempting fate for the selfies, Hawaii’s tourism is suffering currently because of the eruption. According to Ross Birch, executive director of the island’s tourism board, cancellations between May and July have already reached $5 million. Photograph: Mario Tama/Getty Images 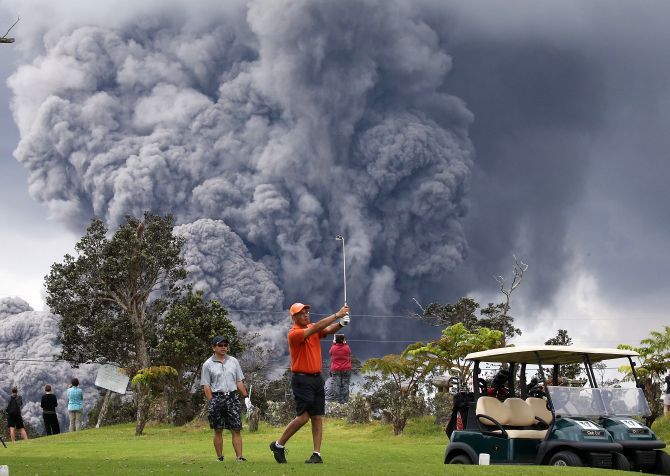 These golfers seem unaffected by the volcanic ash. Getty Photographer Mario Tama said of the photo, "I walked over to the left and they started to tee up and that's when I shot those photos. I still can't understand it. They seemed to be completely nonplussed. I don't even recall them even looking at [the volcano]. They were completely focused on their game." Photograph: Mario Tama/Getty Images 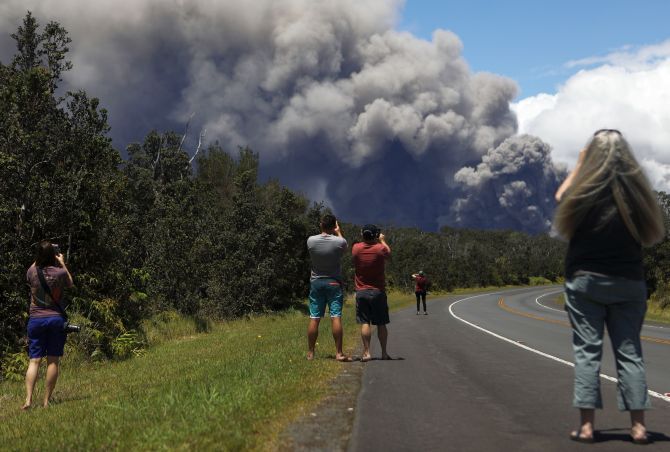 Kilauea is the youngest and most active of the five volcanoes on the Big Island. It's been erupting continuously since 1983. Photograph: Mario Tama/Getty Images 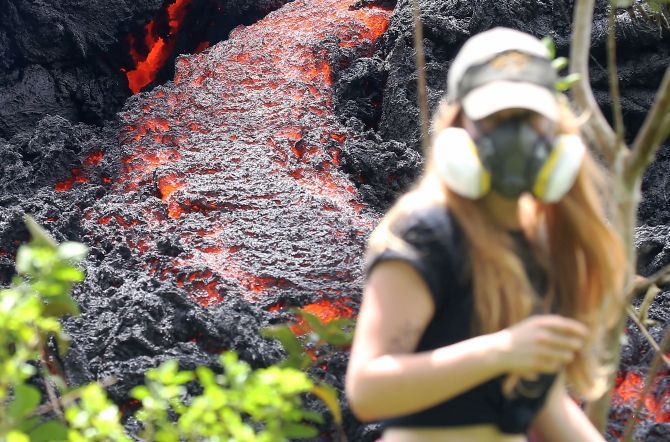 The flowing lava from the volcano has caused killed off patches of land, with once green areas turned brown or black, and the houses built on the land appearing a similar colour. . Photograph: Mario Tama/Getty Images 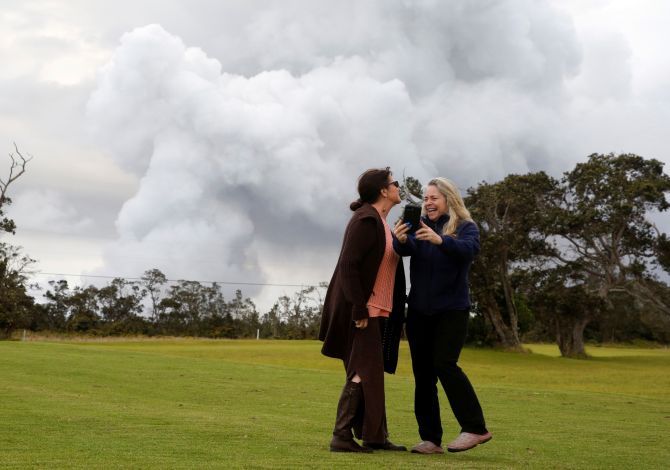 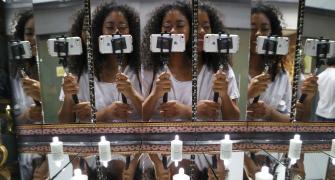 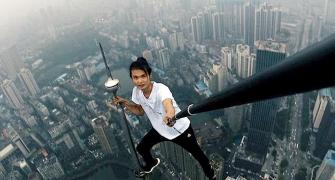 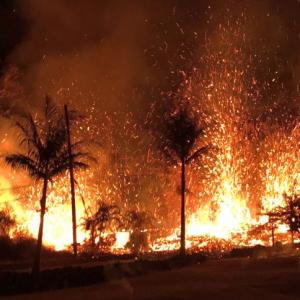 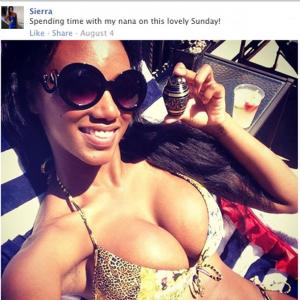