The National Investigation Agency took suspended Mumbai police officer Sachin Waze to the spot where the explosives-laden Scorpio was found near industrialist Mukesh Ambani's residence in Mumbai last month, and recreated the crime scene as part of its probe into the case, a police official said on Saturday. The scene was recreated late on Friday night, in which Waze was asked to walk there for some time wearing a white kurta, he said.

The NIA suspects that the person wearing a kurta, who was captured on the CCTV footage recorded at the spot-Carmichael Road- on the day of incident was Waze, although it is being confirmed, officials had earlier said.

"A number of NIA officers on Friday night reached the place where the SUV was found near Ambani's house. The road was barricaded for some time and the crime scene was recreated as part of the investigation," the official said.

Waze and the investigators were present at the spot for more than 30 minutes, he added.

"During the crime scene, the suspended assistant police inspector (Waze) was asked to walk there for some time wearing a white kurta," he said.

The entire process of reconstruction of the crime scene was video-recorded, the official said, adding that local police were also deployed at the spot.

The Scorpio was found parked near Ambani's multi-storey residence 'Antilia' with gelatin sticks and a threat letter on February 25. Waze was arrested by the NIA in connection with the case last Saturday.

He was later suspended.

Waze, an "encounter specialist", has also been facing heat in the murder case of Thane-based businessman Mansukh Hiran, who was in possession of that SUV.

Hiran was found dead in a creek on March 5. The Maharashtra Anti-Terrorism Squad is probing that case.

Hiran's wife has accused Waze of involvement in her husband's suspicious death.

The NIA has so far questioned several officials of the Crime Intelligence Unit of city police, to which Waze was attached, and seized a total of five high-end vehicles including two Mercedes cars.

Waze has been remanded in the NIA's custody till March 25. 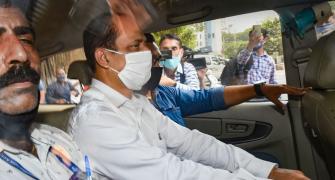 Waze 'met' Hiran the day his Scorpio was 'stolen' 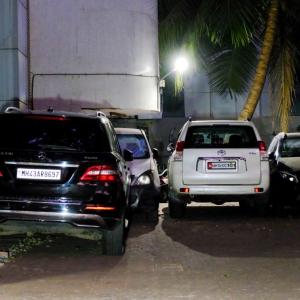