A diamond bracelet and jewelled decorative elephants from Jaipur are some of the Indian heirlooms that made up a collection of 350 personal items belonging to Patricia Mountbatten, Lord Louis Mountbatten's eldest daughter, which fetched over £5.6 million (Rs 56 crore/Rs 560 million) at an auction in London. 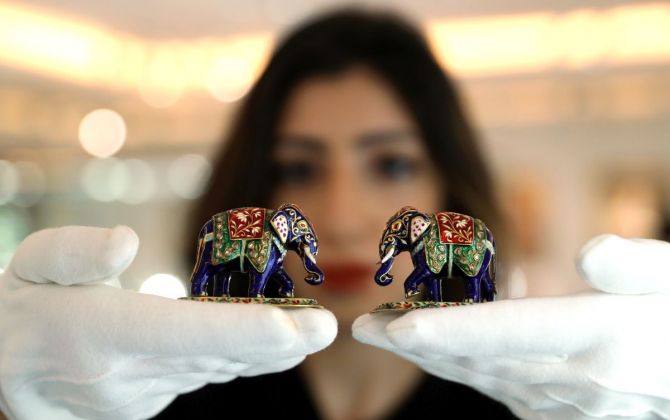 IMAGE: Elephants, an anniversary present from Louis Mountbatten, the last British viceroy, to his wife Edwina are displayed at Sotheby's in London. Photograph: Chris Jackson/Getty Images

Patricia Edwina Victoria Mountbatten was the second Countess Mountbatten of Burma and had a strong royal connection as the great-great-granddaughter of Queen Victoria and first cousin to Prince Philip, the 99-year-old husband of Britain's Queen Elizabeth II.

The Sotheby's online auction had estimates ranging from £80 to £100,000, a majority of which were surpassed as bidders from across the world lined up for the items inherited from her ancestors sharing connections with India, a place that was said to be very special to the family.

'Lady Mountbatten's residence, Newhouse, was a private place for entertaining only the closest of family and friends, capturing all the magic of a stately home on an intimate scale,' said Harry Dalmeny, Sotheby's chairman, UK & Ireland.

'Through her belongings, many passed down from members of the extended family over the years, collectors have the chance to see the story of the 20th century unfold and acquire evocative vestiges of a glittering way of life,' he said. 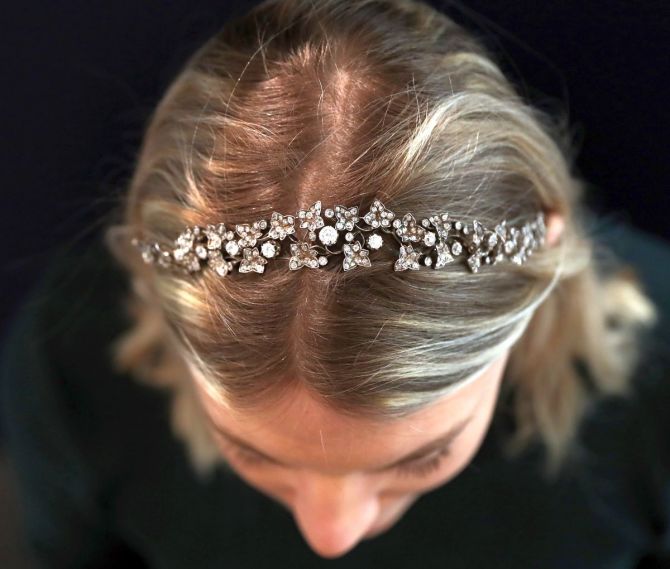 Patricia Mountbatten's Indian connection was not just as the daughter of Lord and Lady Mountbatten, but also on her husband John Knatchbull's side of the family as his father Michael Knatchbull, spent four months as acting viceroy in 1938 when the viceroy Lord Linlithgow traveled to England for a holiday.

John himself worked for Lord Mountbatten in India and later became an Oscar-nominated film producer, behind the well-known Raj era epic A Passage to India.

The Indian heirlooms up for auction included a diamond set and enamelled gold bracelet made in India, that once belonged to Queen Victoria.

The bracelet, which fetched £40,320 (Rs 40 lakh/Rs 4 million), includes a portrait of Victoria's husband Albert as a child and would have been commissioned by the monarch herself.

This was then passed down through Victoria's descendants to Louis Mountbatten and then to his daughter Patricia.

They are engraved on the base with the words 'Edwina from Dickie' in Mountbatten's handwriting. They had become engaged at the Viceroy's House in Delhi in 1922 when Mountbatten accompanied the then prince of Wales (later King Edward VIII) on his long tour of India.

'The loving gift is an insight into their marriage one that had brought together two of the most glamorous and adventurous figures of the period and testament to the importance of India to both of them. 1946 was the year Lord Mountbatten was made a viscount and this gift anticipates the news of his appointment as Viceroy the following year,' notes a Sotheby's statement. 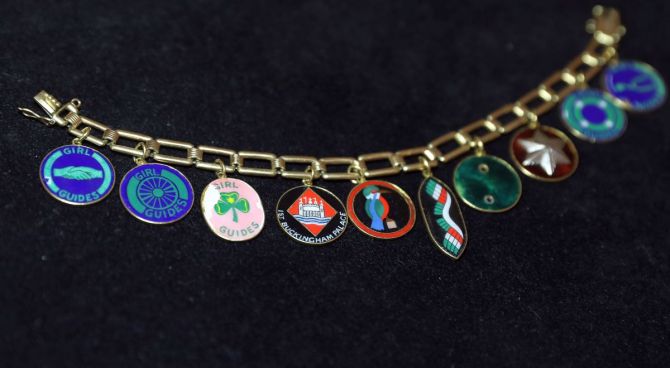 A 'Tutti Frutti' style set of jewels in the collection, which sold for £107,100, belonged to Edwina Mountbatten, who is said to have had a particular penchant for this style that took inspiration from Indian cut-coloured gems.

The auction also included a lot made up of a rare Anglo-Indian inlaid bureau by Thomas Chippendale, made in 1767 and passed down through the Knatchbull family, which sold for £69,300.

'Our overriding desire when organising our mother's affairs is to honour her wishes and celebrate the memory of both our mother and our father. They had discussed these arrangements with us, and we are simply putting their plans into effect,' read a statement from the Mountbatten family, in reference to the auction.

Aditi Khanna
Source: PTI© Copyright 2021 PTI. All rights reserved. Republication or redistribution of PTI content, including by framing or similar means, is expressly prohibited without the prior written consent.
SHARE THIS STORY
Print this article
The trial of Mountbatten
'Mountbatten was the worst viceroy of India'
What really happened in August 1947