Prime Minister Narendra Modi offered prayers at the famous hill shrine of Lord Venkateswara at Tirumala in Tirupati on Sunday.

Upon his arrival at the ancient temple, Modi was accorded a grand traditional reception amid chanting of Vedic hymns by the priests, who escorted him to the sanctum sanctorum along with temple officials.

Clad in a traditional attire, the prime minister also paid obeisance at the sub shrines of Sri Yoga Narasimha Swamy and Sri Ramajujacharya besides the golden Vimana Venkateswara, the sacred golden altar, the golden holy mast (Dwajastambham) inside the shrine.

He spend about half an hour in the temple, a temple official told PTI.

After offering prayers, the prime minister was honoured with a sacred silk cloth besides a memento of Lord Venkateswara and 'laddu' prasadam at the sprawling Ranga Mandapam, while the priests invoked the celestial blessings on Modi, he said.

This is Modi's first visit to the hill shrine after becoming PM for the second consecutive term.

He had earlier visited the shrine in his capacity as the prime ministerial candidate of the saffron party in May 2014 and also as prime minister in October 2015 and January 2017.

Upon his arrival, Modi addressed a thanksgiving public meeting organised by the Andhra Pradesh BJP at Renigunta near Tirupati. Speaking at the gathering, Modi took a veiled dig at Congress president Rahul Gandhi, saying the top opposition leader could not still come out of the impact of election results which showed 'weakness'.

The prime minister asserted that his party-led government would further accelerate work for the betterment of Andhra Pradesh and Tamil Nadu people though the Bharatiya Janata Party could not win Lok Sabha polls in these two States.

"Given the huge mandate we got, some people think expectations and aspirations (on the government) have increased. They also wonder what can Modi do. We should see it as India's fortune and a great opportunity. I see it as a guarantee for a brighter India," he said.

Apparently taking potshots at Rahul Gandhi over his recent comments in Wayanad that Modi's election campaign was filled with 'lies, poison and hatred', the prime minister remarked that some people could not still come out of the impact of election results.

"That is their weakness. For us the chapter of elections has ended. A new chapter of serving the 130 crore people of the country has opened for us," Modi said.

Noting that strong governments were formed at the Centre as well as in Andhra Pradesh, the prime minister wished the state would surge ahead on the development path under the leadership of Chief Minister Y S Jaganmohan Reddy. "AP has infinite possibilities for growth. We will fully extend all co-operation from the Centre for the development of the state," the prime minister assured.

Modi made a special mention of Tamil Nadu, along with AP, thanking people of the two states for playing a crucial role in strengthening democracy.

"Whether or not we secured victory here, our objective always is to serve the people. We (BJP) are a dedicated system of workers and I am a part of it. Even after the elections, we will not lower our efforts to ensure happiness of people and betterment of their lives.

"We will increase our efforts in this regard at the Centre and will especially show it in AP and Tamil Nadu," he said.

The prime minister said he has confidence in 130 crore Indians.

"With their contribution and support, I am confident we can give a new direction to the country," he said.

Two good occasions beckoned the country in the near future, Modi pointed out, referring to the 150th birth anniversary of Mahatma Gandhi in October 2019 and the 75th anniversary of the nation's Independence in 2022.

"These are two important occasions that could be inspirational, which the country should not miss. They give us a chance to recall the sacrifices of the freedom fighters and take a pledge for doing something for the country," he said. 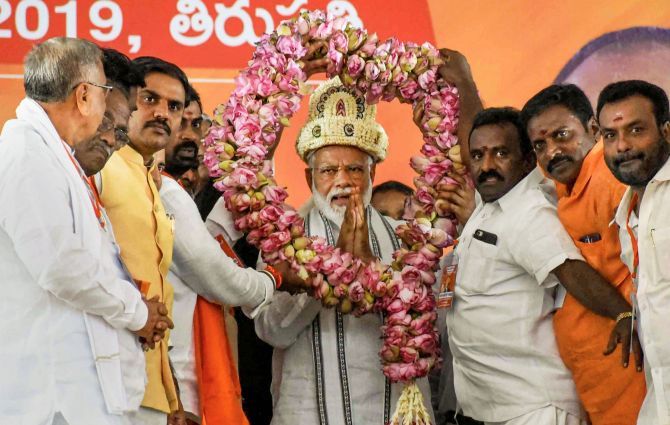 IMAGE: The PM being felicitated at Praja Dhanyavaada Sabha near Renugunta airport in Tirupati, on Sunday. Photograph: PTI Photo

He sought the blessings of Lord Venkateswara to realise the dreams of 130 crore people of India and said States and the Centre should work together towards this and create a New India.

"When we dream of a New India, we also wish that every state also should progress in the same manner. Only then can we build a New India. Sabka Saath, Sabka Vikas, jisme raajyon ka bhi saath, jan saamanya ka bhi saath. Jan saamanya ka vikas, rajyon ka vikas. We are moving ahead with that determination towards making this a reality," Modi said.

"If that happens, I am sure, we will succeed in the right earnest and prosper," the prime minister added.

Observing that winning elections was the aim only in the electoral battlefield, the Prime Minister said winning people's hearts should be the constant endeavor, 'all 365 days a year'.

The government, Modi pointed out, should be useful only for building the nation and not the party.

"This is not our nature, nor are we used to it. In the last five years, people have seen a government that is solely committed to the welfare of Bharat Mata.

Hence, they gave us a renewed mandate to serve them for the second time," he added.