Steamrolling opposition, the Bharatiya Janata Party on Wednesday swept the Municipal Corporation of Delhi polls, trouncing the Aam Aadmi Party that rules Delhi and decimating the Congress, in an election which was billed as a referendum on the Arvind Kejriwal government.

Delhi’s overwhelming rejection of the AAP came barely two years into its meteoric rise in the 2015 assembly polls when it had clinched an unprecedented 67 of the 70 seats.

On Wednesday, it was left with just 48 wards in its kitty out of the 270 spread across the three municipal corporations in the national capital where poll was held.

After its abysmal performance in the 2015 Delhi assembly polls when it could manage to win just three seats, the BJP added muscle to its decade-long domination of the corporations effortlessly bucking anti-incumbency, with the electorate giving a thumbs up to its gamble of fielding all fresh faces.

The results are being seen as a ringing endorsement of Prime Minister Narendra Modi’s policies and a reflection of his unmatched popularity. 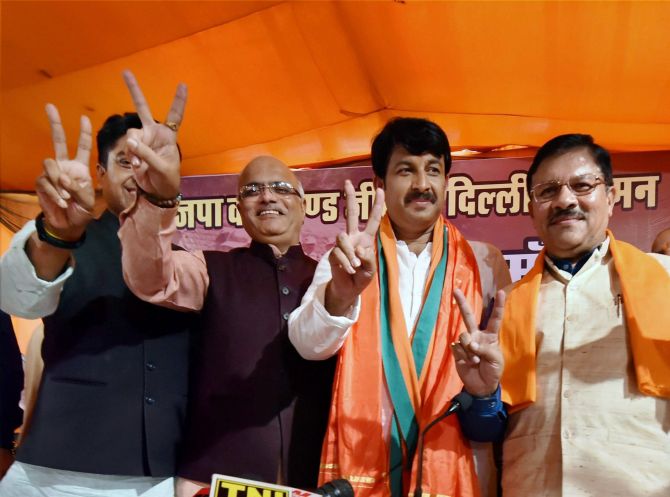 IMAGE: Delhi BJP President Manoj Tiwari and others during a press conference after BJP posted a huge victory in the MCD elections, in New Delhi on Wednesday. Photograph: Vijay Verma/PTI Photo

Taking forward its stupendous electoral successes in Uttar Pradesh and Uttarakhand, the BJP won 181 seats, putting paid to Congress’ hopes of a revival in the national capital which it ruled uninterruptedly for 15 years between 1998 and 2013.

The Congress could win just 30 seats.

The AAP’s abject defeat, which came close on the heels of its abysmal performance in the assembly polls in Goa, where it failed to open account, and poorer than expected show in Punjab, does not portend well for the party which is bracing itself for a bigger battle in Prime Minister Narendra Modi’s home turf Gujarat. Assembly election is Gujarat is due later this year. 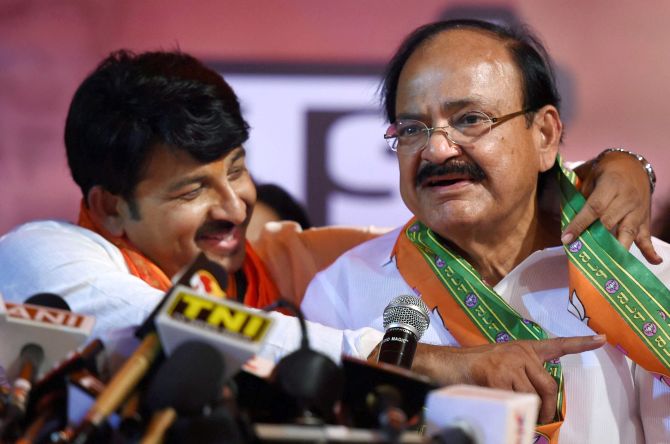 As the AAP hit a political low after successive jolts in the Punjab and Goa assembly polls, and the Rajouri Garden assembly bypoll in New Delhi, there were murmurs of discontent in the party.

Its Delhi convenor Dilip Pandey resigned while Chandni Chowk MLA Alka Lamba offered to step down owing responsibility for the debacle, pointing towards an impending churning in the party.

Delhi’s Water Resources Minister Kapil Mishra, a popular face, called for ‘introspection’ instead of raking up the issue of alleged manipulation of EVMs.

The ripple effect of AAP’s defeat in Delhi was felt in Punjab where knives were out, with party MP Bhagwant Mann assailing the party leadership for the loss in the assembly election.

Mann alleged that the AAP leadership was behaving like a ‘mohalla (neighbourhood) cricket team’ and said there was no use of finding fault with the EVMs.

There were noises of discontent in Congress, too, with Sheila Dikshit, who led the party’s government for 15 years in Delhi, calling for ‘introspection’.

"The party was not able top reach out (to voters) the way we should have. Any excuse can be given when you don’t want to do anything. The decision has to be taken by the high command. The leadership needs to introspect,” she said.

Dikshit, who did not campaign, said Ajay Maken, the party’s state unit chief, did not involve senior leaders in electioneering.

"I was not asked for campaigning then how could have I gone for it," Dikshit said. 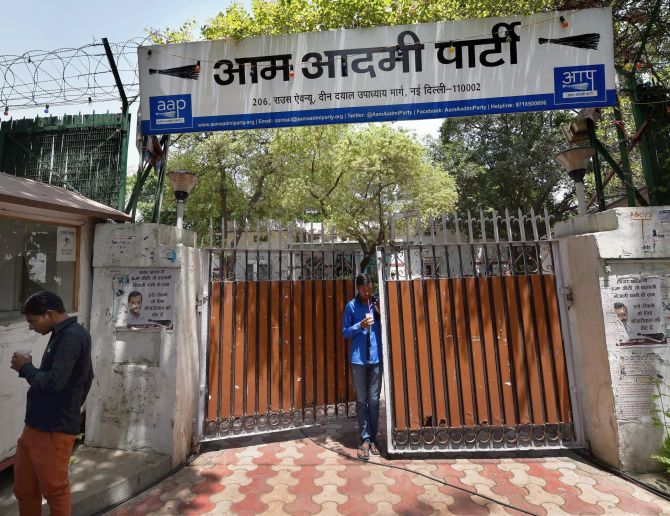 A jubilant Modi, meanwhile, expressed his gratitude to the people of Delhi for reposing faith in the BJP and ensuring its resounding victory.

‘I laud the hardwork of team @BJP4Delhi which made the resounding MCD win possible,’ he tweeted.

In his first reaction, Kejriwal promised all cooperation to the civic bodies and refrained from commenting on EVMs, the ‘manipulation’ of which he had identified as the reason behind AAP’s string of poll upsets.

‘I congratulate BJP on their victory in all 3 MCDs. My govt looks forward to working wid MCDs for the betterment of Delhi (sic),’ Kejriwal, who went into a huddle with top leaders of the AAP as the results trickled in early in the day, tweeted.

The Congress, which was hoping to bounce back in Delhi, has also been consigned to political wilderness, at least for the time being. Ajay Maken, who steered the party's Delhi unit over the last two years, resigned.

The grand old party did increase its vote share from 9.7 per cent in the 2015 assembly polls to 21.2 per cent in the civic elections, but the scale of the defeat overshadowed whatever little gains it made.

In the 2012 municipal polls, the BJP had garnered 36.74 per cent vote share and the Congress 30.50 per cent. The AAP was yet to make its electoral debut then.

The opposition called it a ‘referendum’ on the Kejriwal government and demanded that the CM resign.

Experts credited the BJP’s landslide victory to the ‘Modi wave’, while the AAP’s debacle was described as the bursting of a political bubble.

Sanjay Kumar, Director of the Centre for Study of Developing Societies, was of the view that the AAP’s defeat will ‘reduce its chances of survival’.

"The way the AAP has been routed, its chances of survival have been reduced. Parties contest elections all the time, they win and they lose as well, it should not be too worrisome for them. But, the AAP's case is different," he said. 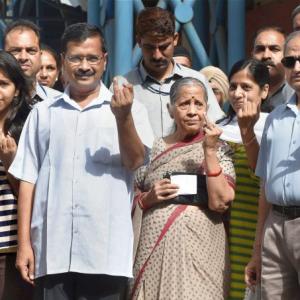 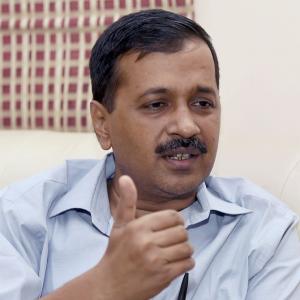 'How will Modiji improve the situation in MCD?'