As India recorded the highest single-day jump of nearly 16,000 COVID-19 cases, Delhi surpassed Mumbai on Wednesday while the lockdown in containment zones in West Bengal was extended till July 31 and a fresh 'test, track and treat' strategy put in place by the Centre to curb the spread of the infection. 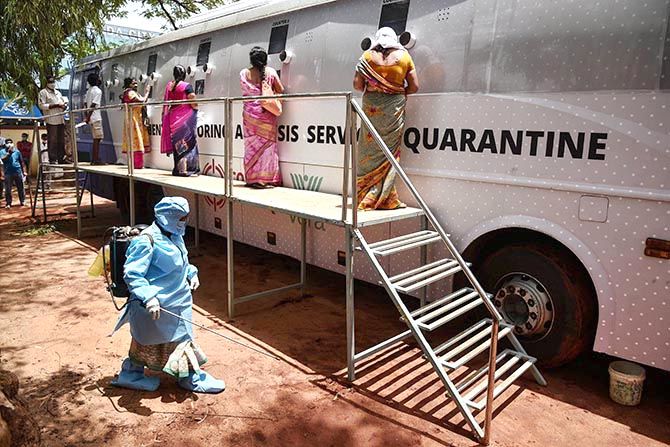 Use of combination of various tests and making testing widely available to all symptomatic individuals across the country were at the heart of the government's revised strategy to fight the pandemic that has claimed over 14,000 lives.

Delhi, which already is the second worst hit state in terms of coronavirus caseload and fatalities, overtook Mumbai after the number of cases soared by 3,788 to touch 70,390.

Mumbai has so far recorded 69,625 cases, according to official figures.

As part of the Delhi government's revised COVID-19 response plan, a house to to house screening will be completed by June 30 in containment zones and for the rest of the city by July 6 in what is billed as a mammoth exercise.

As COVID-19 cases continued to spike in West Bengal, Chief Minister Mamata Banerjee announced extension of the lockdown in the containment zones till July 31.

The lockdown in these zones was to end on June 30. With overall cases in the state inching towards 15,000, it is in the 7th position in the all India tally.

Andhra Pradesh and Karnataka surpassed the 10,000 mark while Telangana inched towards this grim milestone, according to official figures from the states.

In all, 12 states now account for more than 10,000 coronavirus cases as they continued to report record daily spikes that were mainly attributed to augmented testing.

As daily testing of samples of blood and throat and nose swabs crossed two lakh for the first time since the outbreak of the pandemic, over 14,000 new coronavirus cases were registered in the country for the fifth day in a row to take the total count to 4,56,183, according to the Union Health Ministry data. At the same time the recovery rate was steadily improving to reach 56.71 per cent, the data showed.

The country has witnessed a surge of 2,65,648 infections from June 1 till June 24 with Maharashtra, Delhi, Tamil Nadu, Gujarat and Uttar Pradesh remaining the top five contributors to the rising tally.

As many as 3,890 new COVID-19 cases were registered in Maharashtra on Wednesday, taking the count of patients to 1,42,900, a health department official said.

Andhra Pradesh accounted for 10,331 cases with 497 more people testing positive. While it took close to three months from March for the first 5,000 cases to emerge in AP, the second 5,000 came in just 15 days.

The tally in Karnataka was 10,118 with the state reporting 397 new positive cases.

The surge in COVID-19 cases continued unabated in Tamil Nadu with an all-time high of 2,865 people testing positive in a single day, taking the tally to 67,468 while the toll mounted to 866 with 33 deaths.

With the focus on increasing testing, the state analysed a record 32,079 samples on Wednesday.

Inter-district public transport bus services were also being withdrawn in the state for six days from Thursday. 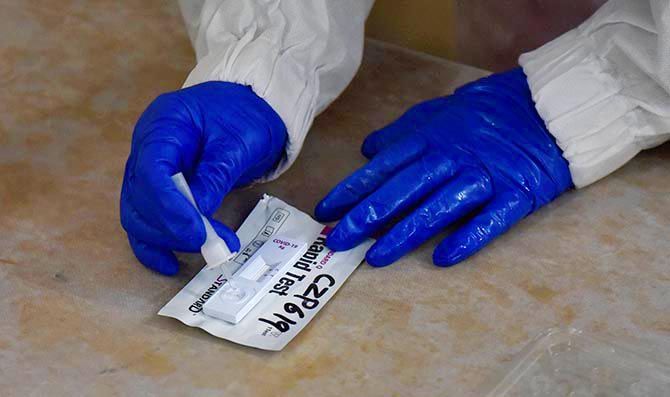 The Indian Council of Medical Research (ICMR) said a total of 73,52,911 samples were tested up to June 23 with 2,15,195 samples being analysed on Tuesday and there were over 1,000 COVID-19 testing laboratories but acknowledged more needs to be done.

'However, in spite of these developments, access to testing still remains a huge challenge in a large country like India. There is a definite need to increase the outreach of testing by introducing rapid point of care diagnostic tests,' the ICMR noted in its advisory issued late on Tuesday.

Expanding the testing criterion for coronavirus, the ICMR said it should be made widely available to all symptomatic individuals across the country.

'Since 'test, track and treat' is the only way to prevent spread of infection and save lives, it is imperative that testing should be made widely available to all symptomatic individuals in every part of the country and contact tracing mechanisms for containment of infection are further strengthened,' it said in an advisory on 'Newer Additional Strategies for COVID-19 Testing'.

The apex health research body has also advised authorities to enable all government and private hospitals, offices and public sector units to perform antibody-based COVID-19 testing for surveillance to help allay fears and anxiety of healthcare workers and office employees.

Besides, the ICMR also recommended deployment of rapid antigen detection tests for COVID-19 in combination with RT-PCR tests in all containment zones, all central and state government medical colleges and government hospitals, all private hospitals approved by the National Accreditation Board for Hospitals and Healthcare (NABH), all NABL-accredited and ICMR approved private labs, for COVID-19 testing.

'ICMR advises all state governments, public and private institutions concerned to take required steps to scale up testing for COVID-19 by deploying combination of various tests as advised,' the advisory added. 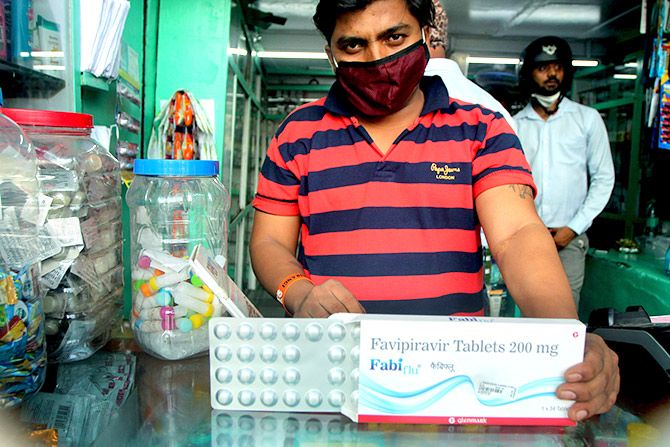 IMAGE: A chemist displays the Fabiflu tablets at his medical store, in Mumbai. Photograph: ANI Photo

Also, there is value in conducting serosurvey with IgG-based antibody tests, an additional testing method, in certain situations, it said.

The Immunoglobulin (IgG) Serum test is performed to determine the presence of any infection in the body and the level of immunity.

In Delhi, authorities have planned to use Aarogya Setu app coupled with an IT-driven tool to boost surveillance and contact tracing in the COVID-19 affected areas.

This is part of the new COVID-19 response plan prepared by Delhi government health department, as per the recommendations from the Union Health Ministry.

The purpose is to boost surveillance of positive cases and improve contact tracing, officials said.

The Karnataka government also issued an order notifying establishment of fever clinics and swab collection centres in 66 private hospitals or medical colleges in the city, aimed at controlling the spread of the disease.

It said, with the spike in number of Influenza-like Illness (ILI) and Severe Acute Respiratory Infection (SARI) cases, there is a need to increase the number of fever clinics and swab collection centres.

In the national capital, the Army Medical Corps(AMC) was roped in to manage the health care at the Railways' COVID-19 care centre at the Shakur Basti station where the first two patients were put up in isolation coaches.

A team of officials from the border guarding force visited the Radha Soami Beas facility and held discussions with the Delhi government and other stakeholders who will be partners in running the centre, an ITBP officer said. 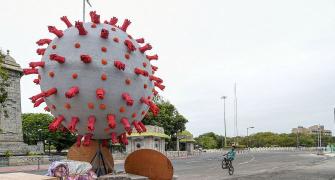 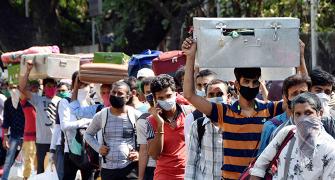 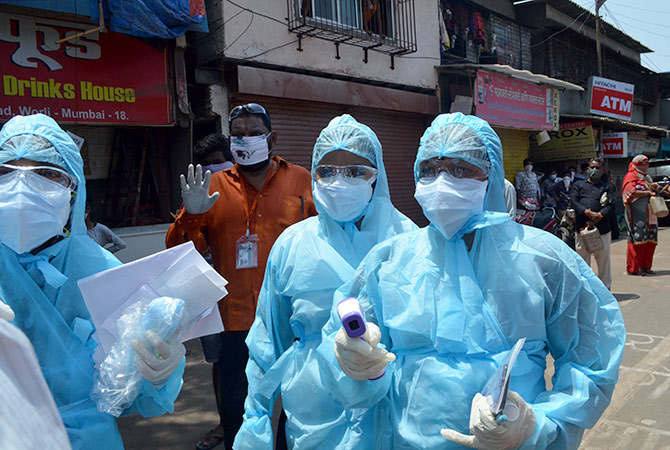 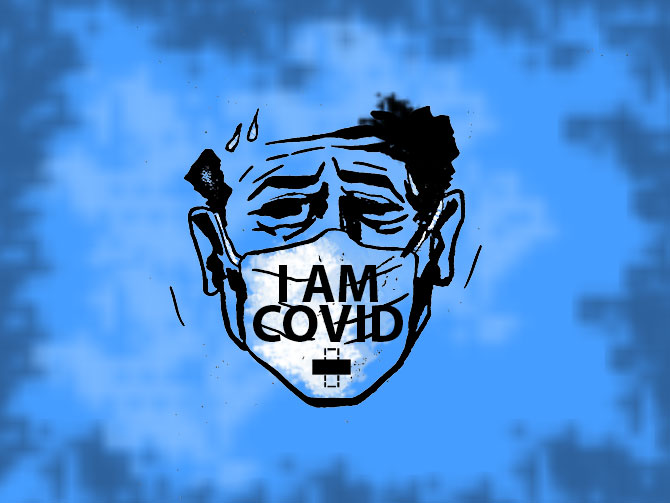