A major rescue operation is underway in the Adriatic Sea to airlift passengers stranded in a burning Italian-flagged ferry, the Norman Atlantic. Authorities said one Greek man had died and there were reports of four injured among 478 passengers and crew. The Italian navy said 190 people were clear of the danger zone, with 287 still on board. A rescue helicopter flies over the southern Adriatic sea during a rescue operation for passengers of the burning car ferry Norman Atlantic. Photograph: Handout/Reuters

Even as the Italian Navy airlifts stranded passengers, efforts were underway to tow the ferry towards Italy.

Greek Shipping Minister Miltiadis Varvitsiotis said the ship would be towed to Italy, and that fire on board now appeared to be partly under control.

"It will be a very difficult night and I hope that everything will go well and we will rescue all passengers and all crew members," Varvitsiotis said. 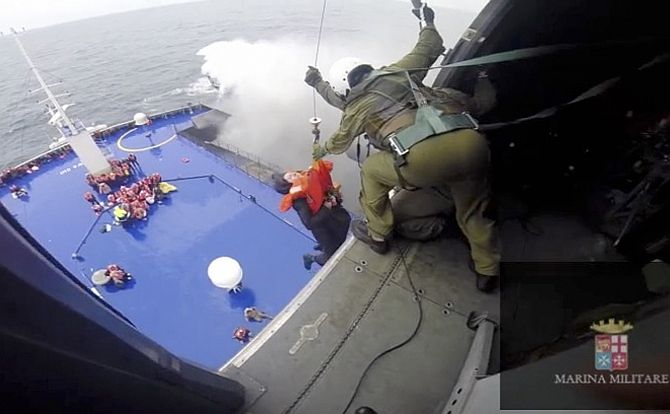 A person is lifted on an Italian Navy helicopter as the car ferry Norman Atlantic burns in waters off Greece. Photograph: Marina Militare/Handout via Reuters

Media reports quoted coastguard officials as saying that the Norman Atlantic, which was also carrying more than 200 vehicles, was 44 nautical miles north-west of the island of Corfu when it radioed for help. It had been travelling from Patras in western Greece to the Italian city of Ancona. 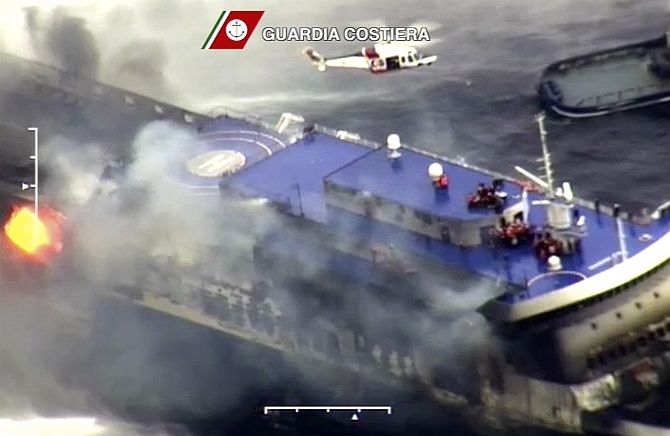 The car ferry Norman Atlantic burns in waters off Greece in this handout video grab of the Italian Coast Guard. Photograph: Guardia Costiera/Handout via Reuters

Command of the operation was transferred to Italy after winds took the helpless vessel out of Greek waters but officials were coordinating closely. A coastguard official said nearby passenger and container ships had attempted to form a ring around the burning vessel to try to form a windbreak to allow small rescue boats to approach.

Officials said there were 478 passengers and crew on the Norman Atlantic, of whom 268 were Greek, while a foreign ministry official said there were also passengers from countries including Germany, Italy, Austria, Turkey, France and the Netherlands. Many appeared to be truck drivers. 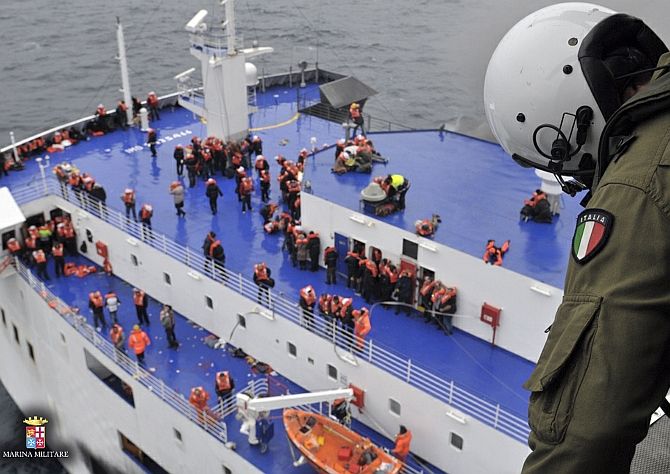 An Italian Navy member looks out from helicopter as the car ferry Norman Atlantic burns in waters off Greece. Photograph: Marina Militare/Handout via Reuters

Some passengers called Greek TV stations in desperation as they huddled on top of the Norman Atlantic while the ship was battered by gales.

Most of those rescued were transported to other nearby ships, but nine were taken to the Italian town of Lecce.

Sky News reported that the heat from the fire was so intense it was melting the shoes of those who were not on the top decks. A person rescued from the Norman Atlantic vessel in the Adriatic sea is carried by medics off the ambulance as they arrive at the Antonio Perrino hospital in Brindisi, Italy. Photograph: Ciro De Luca/Reuters

One passenger who called Greek TV said: "They tried to lower some boats, but not all of us could get in. There is no coordination. It is dark, the bottom of the vessel is on fire. We are trying to save ourselves."

The ship is owned by the Italian company VISEMAR de Navigazione and chartered to Greek ferry firm ANEK Lines SA. It runs on a route which in the summer is popular with tourists heading to the southern Greek mainland.