For the first time in living memory, the gigantic chariots of Lord Jagannath and his celestial siblings rolled on the streets of Puri on Tuesday, a pale shadow of the grand spectacle, with the pilgrim town under curfew and the sea of devotees missing. 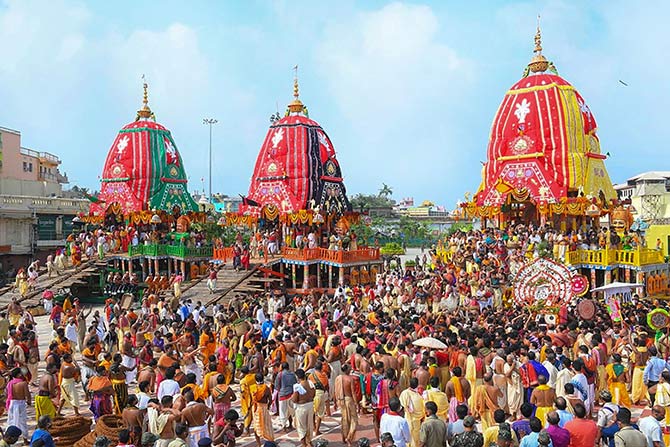 The annual chariot festival, which in normal times attracts lakhs of devotees from across the world, was held 'smoothly and peacefully', a day after the Supreme Court modified its earlier order and cleared the decks for the yatra, an emotive issue for Hindus in several parts of the country.

The elaborate rituals, which commenced early in the morning, concluded after the three wooden chariots of Lord Jagannath, his elder brother Lord Balabhadra and sister Goddess Subhadra reached their destination at Gundicha Temple from Sri Mandir well before evening.

The chariots were pulled by the servitors of the Lord Jagannath Temple and police personnel, who had to clear the COVID-19 test before joining in the subdued festivities.

The Grand Road, the usual site for the celebrations, was forlorn in the absence of devotees.

Rituals like 'Mangla Arati' and 'Mailam' were held before the presiding deities set out from the sanctum sanctorum of the temple. The temple premises and its adjoining areas were sanitised before the festival got under way. 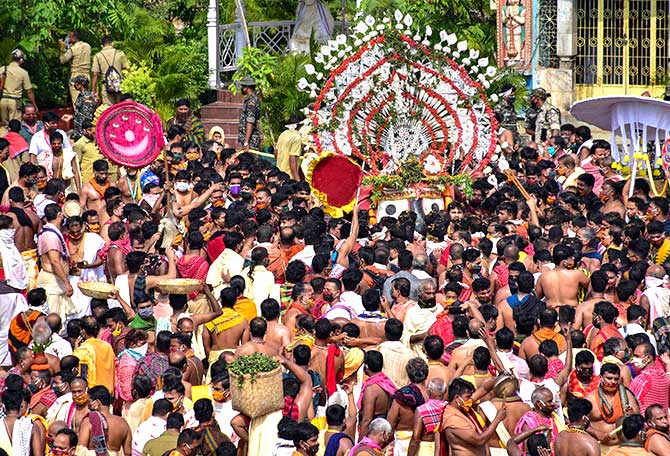 Descending from the 'Ratna Sinhasana', the bejewelled throne, the three deities were taken out of the temple down the 22 steps called 'Baisi Pahacha' through the Lion's Gate in an elaborate royal ritual called 'Pahandi'.

The deities were carried forward step by step amid blowing of conch shells, beating of gongs and ringing of bells.

Sudarshana, the celestial wheel of Lord Krishna-Vishnu, was taken out first and placed on the chariot of Devi Subhadra. 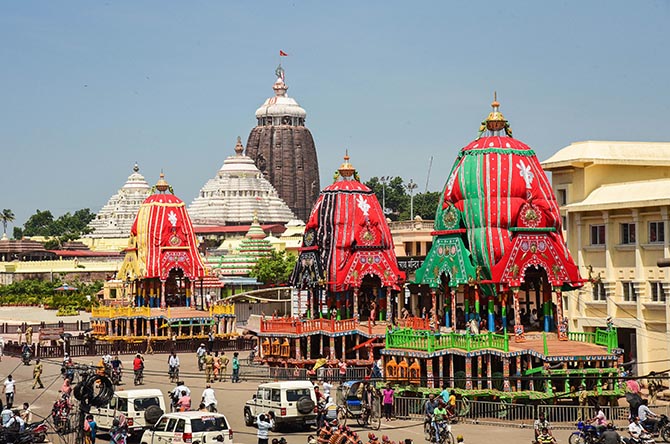 The idols of Lord Balabhadra, Subhadra and finally that of Lord Jagannath were placed on their respective chariots kept outside the temple draped in resplendent layers of red, black, green and yellow fabric.

The tallest of the three chariots was the 45 ft high 'Nandighosh' of Lord Jagannath which stood on 16 huge wooden wheels. 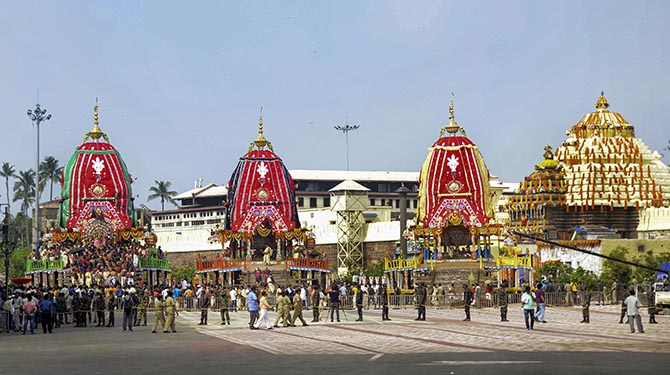 The chariot of Lord Balabhadra called 'Taladhawaja' was 44 ft high and rested on 14 wheels, while Devi Subhadra's 'Darpadalan' was 43 ft high with 12 wheels.

Gajapati Maharaja Dibyasingha Deb, the titular king of Puri considered the first servitor of Lord Jagannath, performed the special 'Chhera Panhara' ritual with a golden broom before the chariots were pulled along the 3 km route, each after an interval of an hour, in accordance with the apex court directive. 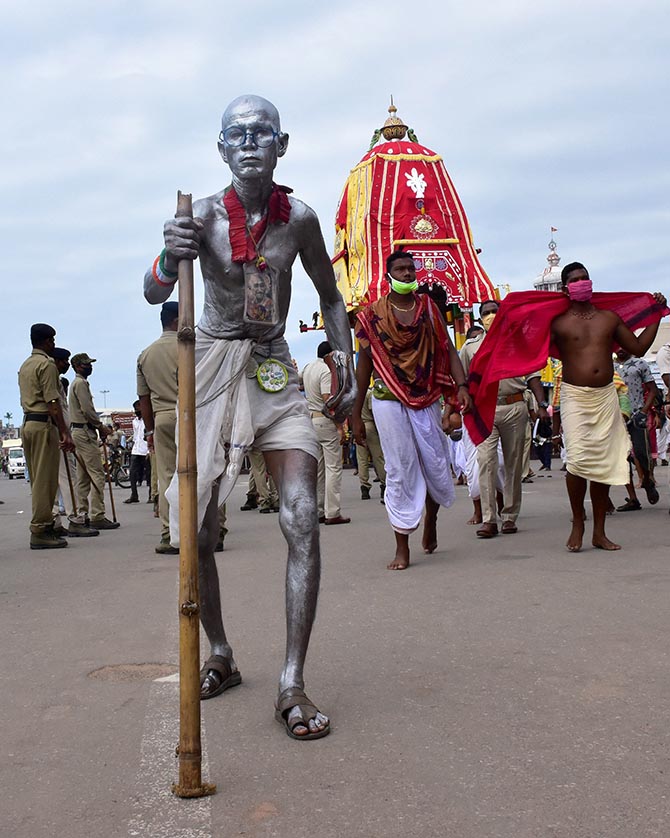 Not more than 500 people were allowed to pull a single chariot while strictly adhering to the Supreme Court guidelines on maintaining social distancing.

Curfew was imposed in Puri district from 9 pm on Monday to 2 pm on Wednesday to prevent large congregations, particularly on the Grand Road facing the 12th century shrine, state's police chief Abhay said. 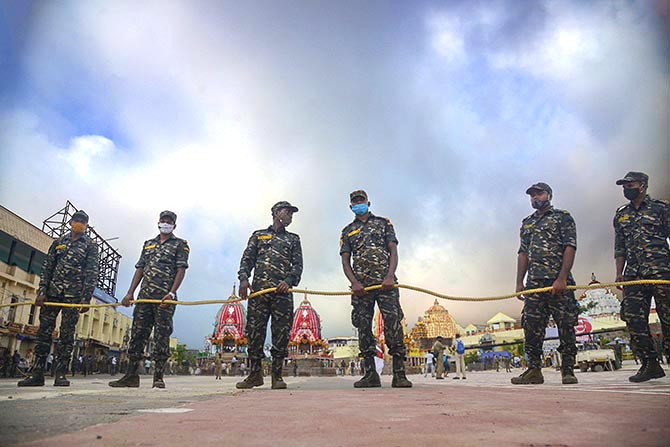 All entry points to Puri town were sealed and over 50 platoons of police, each having 30 personnel, were deployed and CCTVs installed at various locations as part of the security arrangement for the nine-day festival, officials said.

Odisha Chief Minister Naveen Patnaik, who refrained from visiting Puri and witnessed the proceedings on television, thanked people, particularly the servitors, Puri district administration, health and police officials for the conduct of the event.

The Odisha government had scrambled to put in place all arrangements including COVID-19 testing of servivors and police personnel and security deployment soon after the Supreme Court reviewed its earlier order disallowing the Rath Yatra in view of the pandemic.

Patnaik, who had called upon the people to strike a balance between tradition and public health because of the contagion, also thanked the residents of Puri for their cooperation for the smooth conduct of the festival.

Denied the opportunity to be present and pull the chariots, lakhs of devotees watched the proceedings on television.

The Supreme Court gave the go-ahead for the Rath Yatra after taking note of Odisha government's assurance that it 'can be held in a limited way without public attendance'.

Modifying its June 18 order where it had said that this year's Puri Rath Yatra cannot be permitted due to the coronavirus pandemic, a bench headed by Chief Justice S A Bobde had on Monday directed the Odisha government to impose curfew in Puri during the time when chariots were taken out in procession.

Curfew was lifted from most parts of Puri district, barring some areas of the pilgrim town, at 7 pm after the chariots had reached their destination, collector Balwant Singh said. 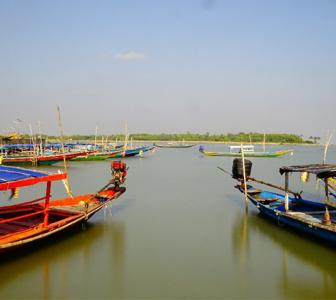 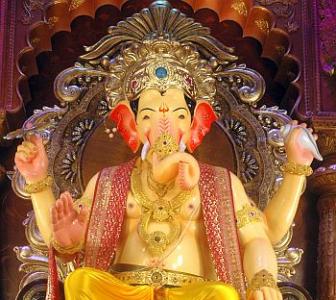 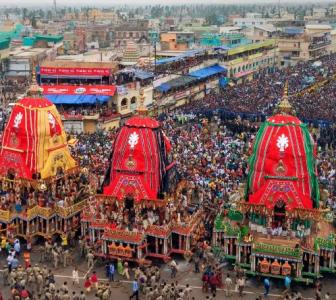 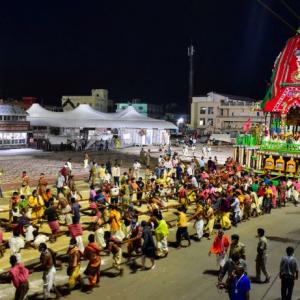 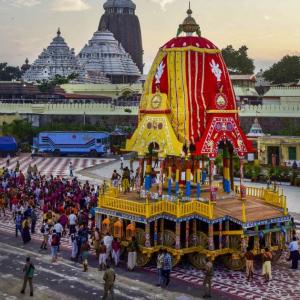