Cold wave tightened its grip on Kashmir Valley ahead of the onset of 'Chillai-Kalan' -- the 40-day harshest winter period -- with the summer capital Srinagar and Leh town recording the coldest night of the season. 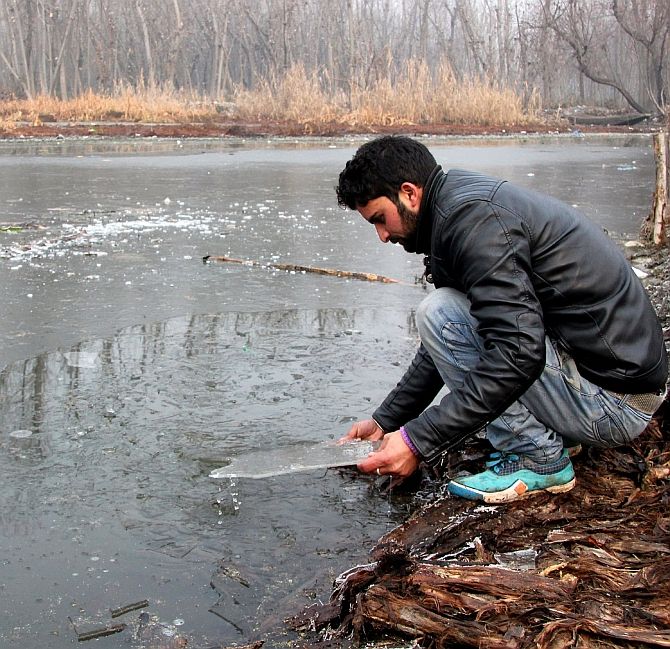 IMAGE: A Kashmiri shows a shard of ice from the Dal Lake in Srinagar. Photograph:Umar Ganie

Chillai-Kalan, considered the harshest period of winter when the chances of snowfall are most frequent and maximum, will begin on Wednesday.

The weather usually remains cold during this period with the mercury remaining several degrees below freezing point, which often leads to freezing of water supply lines as well as water bodies, including the famous Dal Lake.

Srinagar recorded a low of minus 5.5 degrees Celsius last night, down over a degree from the previous night's minus 4.2 degrees Celsius, an official of the MET department said in Srinagar.

He said this is the lowest night temperature the city has experienced so far this winter. IMAGE: A boy crosses a canal on a rope bridge during a foggy winter morning. Photograph:Reuters

The official said the sub-zero temperatures have resulted in freezing of water supply lines in many areas of the Valley, while fringes of several water bodies were also frozen. Leh, in Ladakh region of Jammu and Kashmir, also recorded the coldest night of the season as the mercury there settled at a low of minus 14 degrees Celsius- down from the previous night's minus 13.8 degrees Celsius.

He said Leh was the coldest recorded place in the state.

Qazigund -- the gateway town to Kashmir Valley -- was another place which experienced the coldest night of the season, the official said. IMAGE: Kashmiris keep themselves warm with a bonfire. Photograph:Umar Ganie

The official said Pahalgam health resort in south Kashmir -- which serves as a base camp for the annual Amarnath Yatra -- recorded a low of minus 6.2 degrees Celsius -- nearly a degree down from minus 5.3 degrees Celsius 24 hours earlier.

The minimum temperature in Kokernag town of south Kashmir settled at a low of minus 3.4 degrees Celsius, the official said.