News
Business
Movies
Sports
Cricket
Get Ahead
Money Tips
Shopping
Sign in  |  Create a Rediffmail account
Rediff.com  » News » PHOTOS: Ever been to such bizarre structures?

PHOTOS: Ever been to such bizarre structures?

Here are 20 shades of unusual buildings and homes around the world. 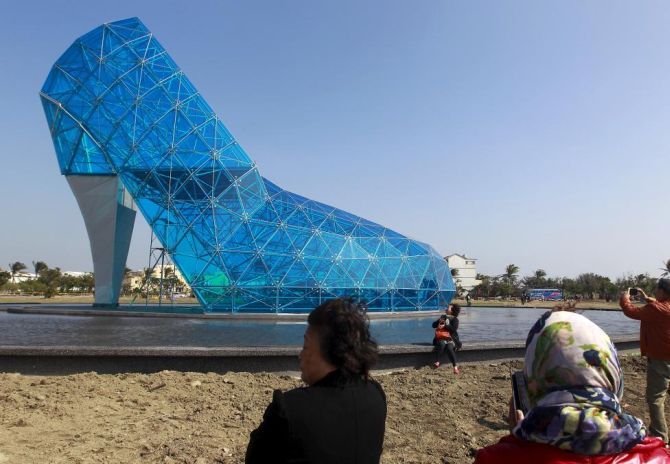 People take pictures in front of a shoe-shaped church in Chiayi, southern Taiwan. The church took three months and about $6,85,000 (about Rs 4.45 crore) to build. It is expected to open in February 2016, before the Lunar New Year, according to the Chiayi county government official. Photograph: Pichi Chuang/Reuters 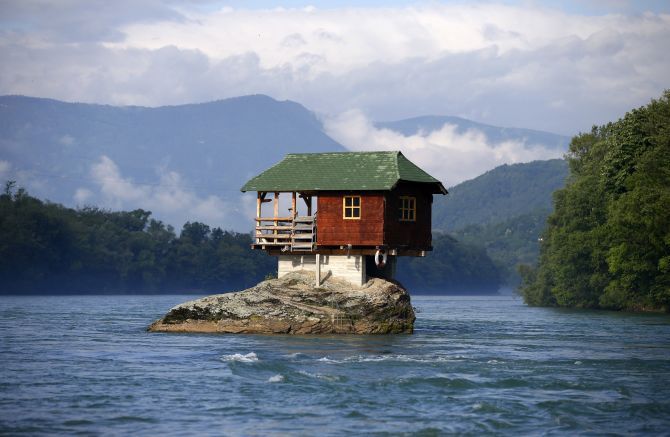 A house built on a rock on the river Drina is seen near the western Serbian town of Bajina Basta. The house was built in 1968 by a group of young men who decided that the rock on the river was an ideal place for a tiny shelter, according to the house’s co-owner, who was among those involved in its construction. Photograph: Marko Djurica/Reuters 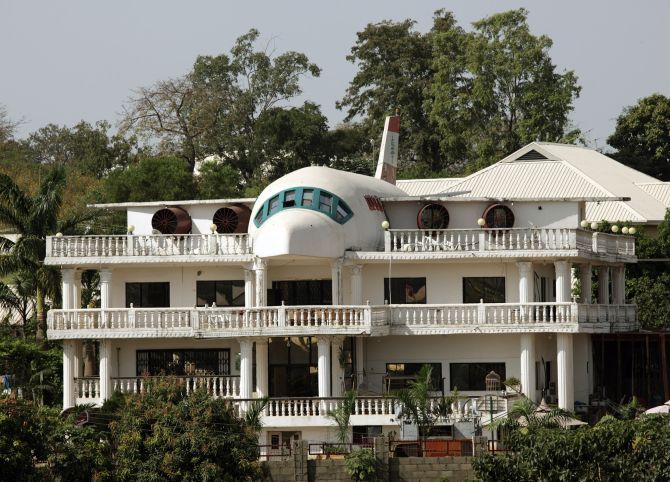 A house partially built in the shape of an airplane is seen in Abuja, Nigeria. Photograph: Goran Tomasevic/Reuters A man passes by a house built upside-down in Russia’s Siberian city of Krasnoyarsk. The house was constructed as an attraction for local residents and tourists. Photograph: Ilya Naymushin/Reuters A worker sweeps a third floor balcony at the Lego Hotel at Legoland in Carlsbad, California. Photograph: Mike Blake/Reuters A piece of public art depicting a sliding house in a residential road in Margate, southern England. Photograph: Toby Melville/Reuters Teachers and students exercise on the playground located on the roof of a kindergarten building, in Xi’an, Shaanxi province, China. Photograph: Stringer/Reuters 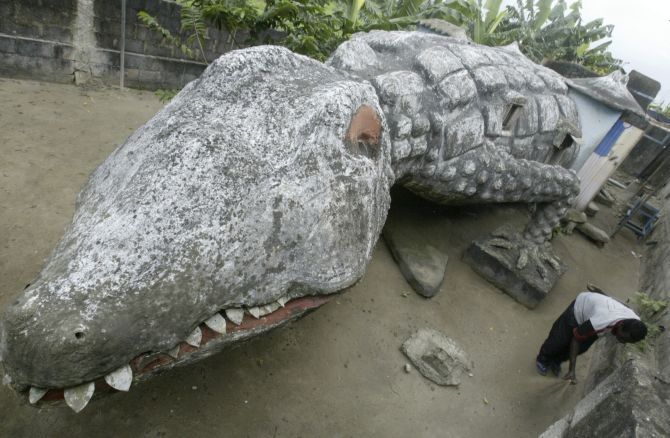 A man sweeps the courtyard of his house built in the shape of a crocodile in Ivory Coast’s capital Abidjan. Photograph: Thierry Gouegnon/ Reuters A car, with an interior that has been converted into a bedroom, sits mounted on poles outside an Amsterdam hotel. Photograph: Robin van Lonkhuijsen/Reuters Houses are seen on the rooftop of a factory building in Dongguan, Guangdong province, China. Photograph: China Daily/Reuters 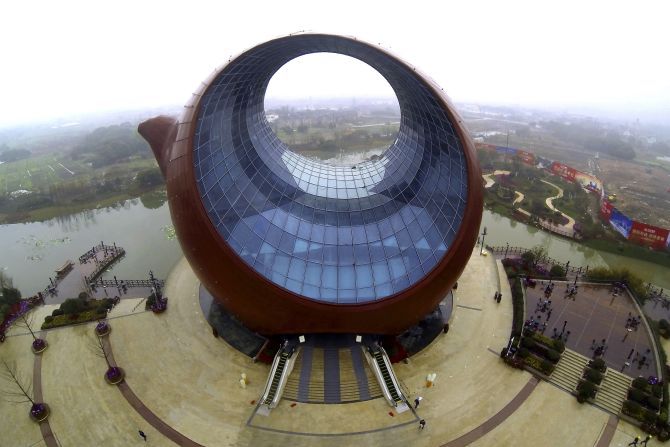 An aerial view of a building shaped like a clay teapot is seen in Wuxi, Jiangsu province, China. Photograph: Carlos Barria/Reuters 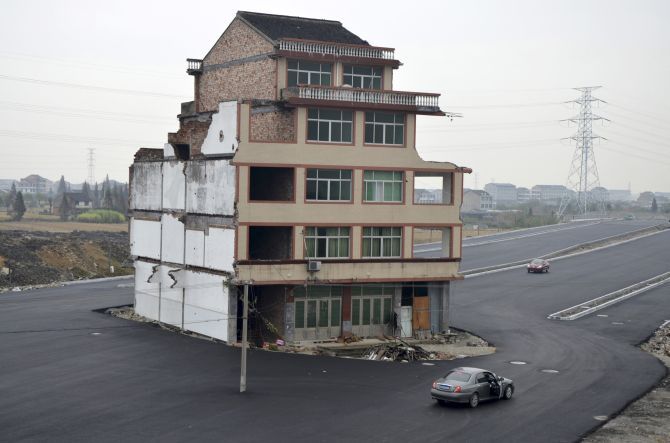 A car stops beside a house in the middle of a newly built road in Wenling, Zhejiang province. An elderly couple refused to sign an agreement to allow their house to be demolished. Their house is the only building left standing on a road which is paved through their village. Photograph: China Daily/Reuters Dutch tourists pose for a photo inside the bedroom of the 'Crazy House', which is built upside-down, in the village of Affoldern near the Edersee lake, in Germany. Photograph: Kai Pfaffenbach/Reuters 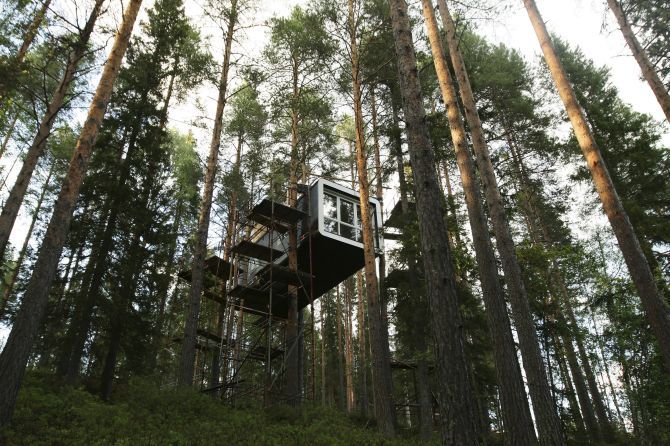 A portion of a treehouse hotel called Treehotel is seen under construction in the Swedish village of Harads. Photograph: Matt Cowan/Reuters 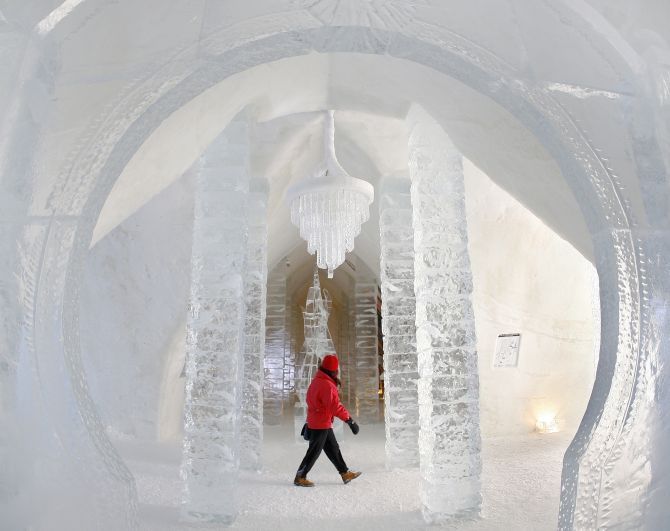 Workers demolish a privately-built villa, surrounded by imitation rocks, on the rooftop of a 26-storey residential building in Beijing. Photograph: Stringer/Reuters The Heliodome, a bioclimatic solar house is seen in Cosswiller in the Alsacian countryside near Strasbourg, France. The house is designed as a giant three-dimensional sundial, set on a fixed angle in relationship to the sun’s movements to provide shade during the summer months, keeping the inside temperature cool, and during Fall, Winter and Spring sunlight enters the large windows as the sun’s position is lower in the sky, thus warming the living space. Photograph: Vincent Kessler/Reuters 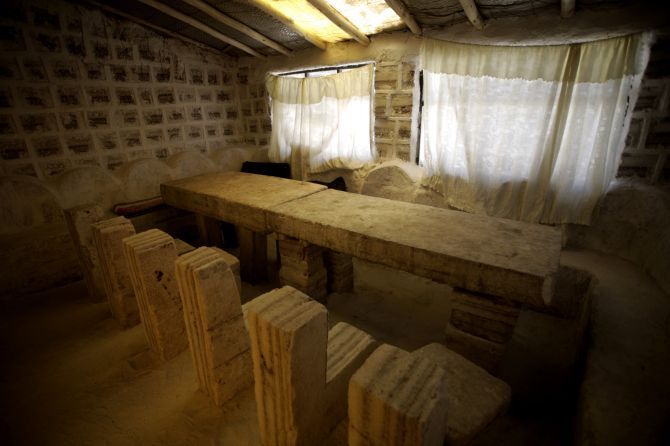 Tables and chairs made from blocks of salt are seen at the salt hotel on Uyuni salt lake, which holds the world's largest reserve of lithium, in Bolivia. Photograph: Gaston Brito/ Reuters 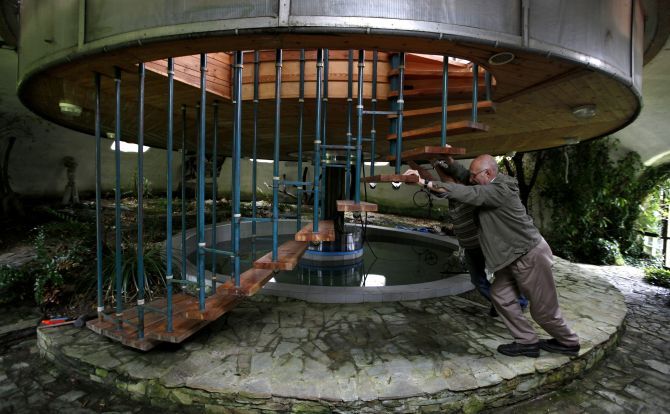 Czech builder Bohumil Lhota turns the house he built near the town of Jablonec nad Nisou, northeast from Prague. Lhota’s house is able to move up and down and rotate on its sides, which allows him to adjust to his preferred window view. Photograph: Petr Josek/Reuters 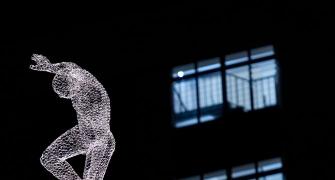 PHOTOS: Holy Cow! A man is falling off the building 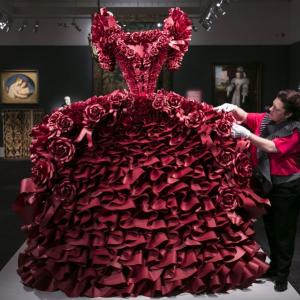