Three terrorists, including a wanted Lashkar-e-Tayiba commander involved in several killings, and a policeman were killed during an encounter between ultras and security forces in the city Wednesday. The district administration has closed all schools and educational institution in the city as a precautionary measure and mobile internet services have also been snapped.

Police assisted by the Central Reserve Police Force launched a cordon and search operation in Fateh Kadal in downtown area of the city following a specific intelligence input about the presence of terrorists there, a senior police official said.

The other two terrorists have been identified as Fahad Waza and over ground worker Rayees, son of the house owner where the encounter took place.

The IGP said Bangroo was involved in several killings in Srinagar and was the key coordinator for the Lashkar in the city.

Giving details of the operation, police officials said a siege was laid around the house where the terrorists were hiding.

"As soon as the police barged inside the house, the policemen came under a heavy barrage of firing from the terrorists, resulting in injuries to one jawan, who succumbed later," the officials said.

They said the security forces responded to the firing of terrorists in equal measure and in the heavy exchange of fire, the house, where the ultras were hiding, got destroyed.

"The terrorists managed to run out of the house and tried to enter into an adjacent house, but were killed in the street," they added. 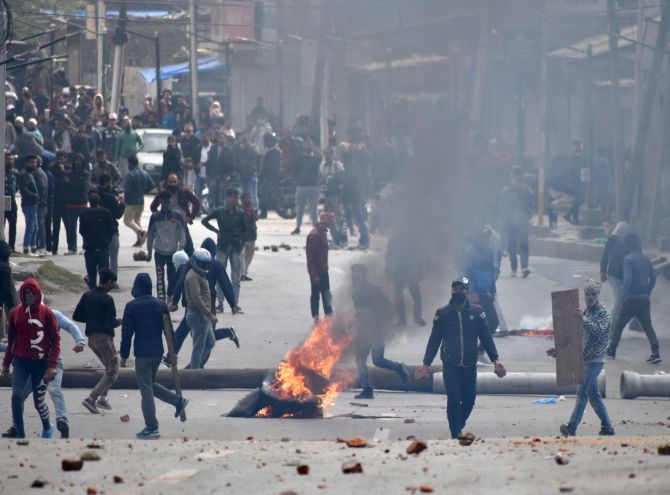 The policeman killed during the operation was identified as constable Kamal Kishore.

A wreath-laying ceremony was held for the slain policeman at the District Police Line in Srinagar before his mortal remains were sent to his native place.

Meanwhile, clashes broke out in several parts of the old city after the encounter as miscreants pelted stones at the security forces, the officials said.

They said curfew has been imposed in some pockets of the city to maintain law and order.

Meanwhile, two policemen, including an officer, were injured in a grenade attack by militants on a police party in Baramulla district of Jammu and Kashmir on Wednesday, police said.

Terrorists hurled a grenade on a police party at a naka in Pattan area of the district this afternoon, a police official said.

He said two policemen, including a deputy superintendent of police, were injured in the explosion.

The injured policemen have been taken to a hospital, the official said.