Delhiites experienced traffic woes and waterlogging at several places as rains lashed the national capital on Friday, bringing respite from the humidity.

According to the MeT department, the Safdarjung Observatory recorded 23.2 mm rainfall while Palam recorded 35.8 mm rainfall between 8.30 am and 5.30 pm. The weatherman has predicted generally cloudy skies with possibility of very light rain or drizzle towards afternoon or evening for Saturday. Photograph: PTI Photo Waterlogging was reported from some parts of the city, including Janpath, Indraprastha and Minto Bridge. Photograph: PTI Photo 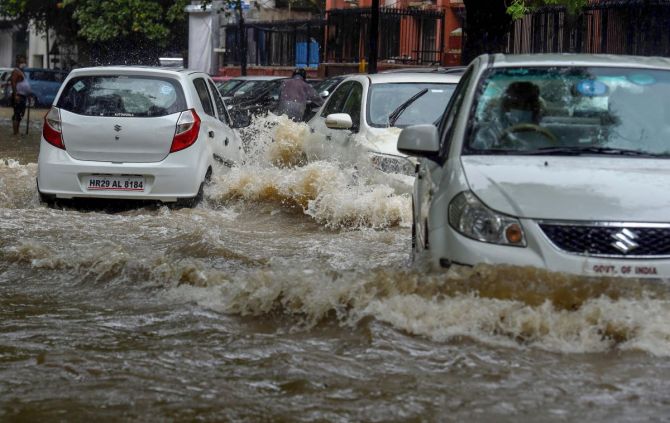 According to Delhi Traffic Police, there were reports of waterlogging near RML Hospital, near Nepal Embassy, Timarpur police station on Outer Ring Road near Pipal Chowk and Vayusenabad on MB Road under IP Flyover and Anand Parbat. Photograph: Atul Yadav/PTI Photo : A man pulls his boat to anchor at the bank of swollen Yamuna River in New Delhi, on Friday. The water level of the river is rising owing heavy rainfall. Photograph: Kamal Kishore/PTI Photo