China has suspended all public transport, including flights in and out of Wuhan, the epicentre of the coronavirus as the confirmed cases climbed to 571 mostly from the city with 17 deaths so far. The World Health Organization which held an emergency meeting on Wednesday in Vienna to deal with the global impact of the virus has extended the talks till Thursday to decide on whether the outbreak in China constitutes a Public Health Emergency of International Concern , like Ebola and Swine flu.

Such a declaration, if made, will be seen as an urgent call for a coordinated international response in view of fears that millions of Chinese are travelling at home and abroad for the Chinese New Year and Spring Festival holidays starting from January 24.

It said its staff in China are closely monitoring the situation.

China's Health Commission which is periodically updating the steps being taken to deal with the virus said on Thursday morning that so far a total of 571 confirmed new coronavirus cases and 17 deaths in Chinese mainland.

Majority of these cases are from Wuhan and surrounding areas. 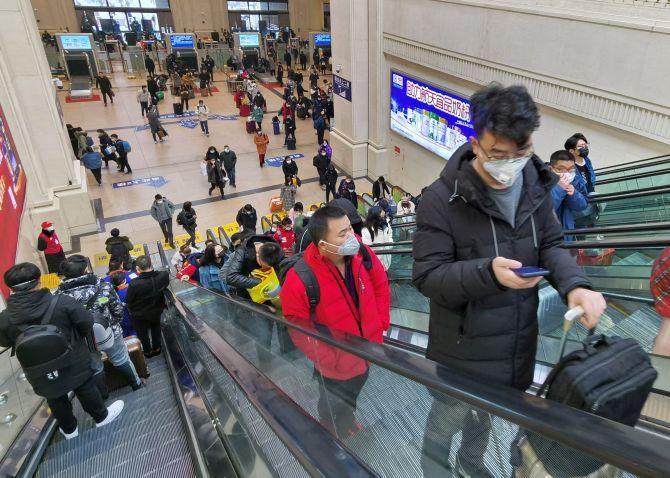 IMAGE: People wearing face masks ride escalators inside Hankou Railway Station in Wuhan, China. Health officials have stepped up efforts to contain the spread of the pneumonia-like disease which medical experts confirmed can be passed from human to human. Cases have been reported in other countries including the United States,Thailand, Japan, Taiwan, and South Korea. Photograph: Xiaolu Chu/Getty Images

While India has already issued a travel alert, some of the 700 students studying medicine and other courses in around the city still stayed put while majority of them left due to holidays.

Seven new cases of Wuhan Coronavirus had been confirmed in Shanghai, the Commission said.

Wuhan also suspended bus and subway services in the city and closed outbound travel at train stations and airports from 10am of Jan 23 amid the escalating epidemic of coronavirus, according to a statement released by city authorities early on Thursday.

The residents have also been directed to wear masks to ensure that the virus is not spread.

"We must be steadfast and strong to keep the outbreak within Wuhan. We'll urge Hubei province and the city of Wuhan to take the strictest measures for prevention and control," Li Bin, vice-minister of the National Health Commission, said on Wednesday.

Such measures include intensifying supervision of open-air markets, minimising public activities, taking the strictest measures regarding people with fever and preventing the outbreak from further spreading, he said at a news conference organized by the State Council Information Office.

The Wuhan government required all people in public places such as hotels, restaurants, cinemas, parks, shopping centres and public transports to wear masks to prevent the spread of the virus, according to an announcement on Wednesday night. The rule took effect immediately.

On Wednesday night, Hubei province with capital Wuhan reported 444 confirmed cases of the new coronavirus in the province alone.

The disease further spread across the country as health authorities in Shanxi, Fujian, Gui¬zhou and Hebei provinces, as well as the Ningxia Hui autonomous region, confirmed their first infection cases. Beijing has already reported some cases.

Hong Kong and Macau too have reported such cases.

"Human-to-human transmission of the disease has appeared, and the virus is likely to mutate. There are risks of the further spread of the disease," Li said, adding the ongoing traffic peak with the upcoming Spring Festival has increased the risk of its spreading, which requires a high state of alert. China's National Health Commission had received reports of one confirmed case in Japan, one in South Korea and three in Thailand by Tuesday midnight, Li said.

In the United States, the Centres for Disease Control and Prevention confirmed on Tuesday the first case in the country in Seattle.

Gao Fu, head of the Chinese Centre for Disease Control and Prevention, said there is no evidence so far showing that a super-spreader, or a highly contagious virus, has emerged.

He added that, based on current evidence, the virus originated from wild animals sold at a seafood market in Wuhan.

In Hubei, the provincial government early on Wednesday announced that it had activated its emergency public health response mechanism to effectively prevent the spread of the virus.

Local authorities will strictly control the number of outbound activities such as conferences, tours and visits, and large gatherings are banned.

Measures will also be taken to prevent the spread of the virus through public transport, and prevent sources of it from entering schools, according to the announcement.

Wuhan authorities announced that all local tourism agencies, including their branches outside the city, will suspend business and will not organize tours until February 8.

All tours scheduled to start after January 30 will be cancelled.

The city government has also called for residents not to leave Wuhan and outsiders not to enter the city if there's no particular need, to reduce the risk of the virus spreading further. 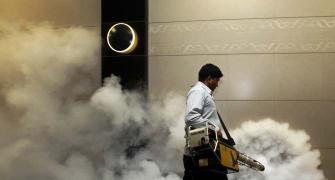