The government has ordered a high-level probe, headed by director general shipping, to nail the guilty behind the oil spill that took place off the Chennai Coast following collision between two ships and the report is likely in a month, Union Minister Nitin Gadkari said on Friday, even as the Madras high court directed the state government to urgently look into the issue and take necessary steps. 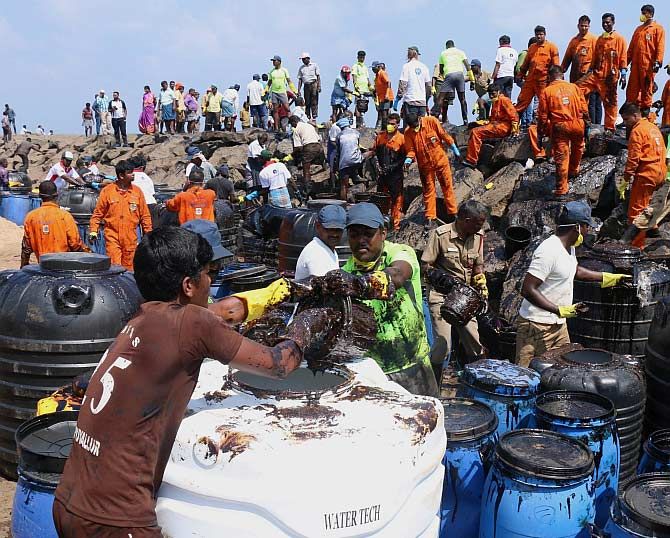 A big damage control exercise was carried out in the wake of the collision, containing a major problem, and the ship has been emptied safely on Friday morning, the shipping, road transport and highways minister said.

Based on the outcome of the probe, action would be initiated against the guilty, he said.

Oil spill has been a cause of concern ever since ‘M T BW Maple’ leaving after emptying Liquefied Petroleum Gas on January 28 collided with M T Dawn, Kanchipuram, loaded with petroleum oil lubricant (POL) off Ennore Port, which is among top 12 major ports in the country.

Minister of State for Shipping Pon Radhakrishnan said the vessel had more than 32,000 tonne of oil and has been emptied.

“Oil spill has been cleaned. From the tank, it did not leak. Oil was leaked from the engine. There is no leakage from the ship,” Radhakrishnan said.

Radhakrishnan also informed the Lok Sabha that more than 80 per cent of the clean-up operation after the oil spill has been completed and most of the residual work is expected to be over within two to three days.

“The total quantity of sludge which has been cleaned up till today (Friday) is 65 tonnes. In addition, super suckers have removed 54 tonnes of oil mixed with water. More than 80 per cent of the work has been completed and most of the residual work is expected to be over within two to three days,” he said.

The Indian Oil Corporation has provided special bio-remediation material for treatment of the collected oil sludge for its safe disposal, he said.

The clean up work on a war-footing was carried out in several areas, including the Ennore shoreline, Marina and Elliots beaches by multiple agencies, including Coast Guard, along with the help of volunteers and local people. 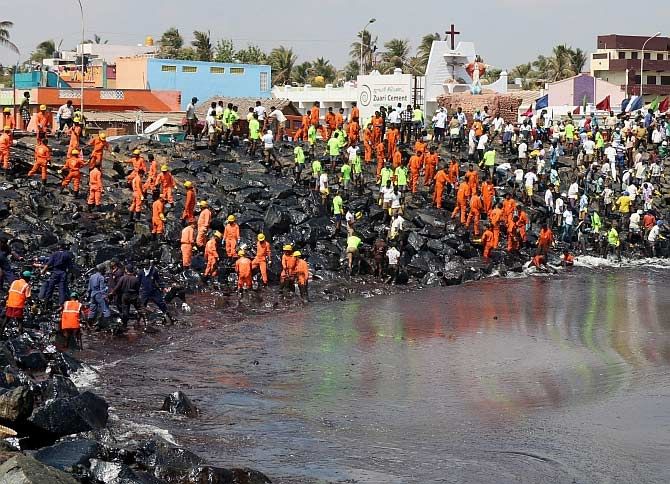 Shipping Secretary Rajive Kumar said that like with the provisions of enquiry by Director General of Civil Aviation, in case of accidents involving air planes, there is a similar provision in the Merchant Shipping Act for enquiry and fixing responsibility.

He said final findings were expected in a month as all possible evidences are being collected to fix the liability.

“Action will be taken and the primary responsibility for paying for this clean up will rest with the ship which has erred in this particular event,” Kumar said.

Also, he said, the Shipping Ministry has sought an audit report on whether the ports handling oil are well equipped as ‘50 per cent subsidy is given to ports handling oil to get equipment and last year we got OISD (Oil Industry Safety Board) which looks after the safety of oil installations in the country’.

“Whatever deficiencies they had pointed out, instructions were given to remove them and I had been told by Ennore Port they had the equipment which is prescribed under the Crisis management Plan,” he said.

“We were coordinating the efforts with Coast Guard as well as with the state governments... There was absolute coordination. People were working which were provided by both the ports as well as from the Maritime institutions. The NGOs and other volunteers, they have done outstandingly good work,” Kumar said.

He explained that one tonne of oil leaked gets 10 times bigger after being mixed with water and debris and by Friday morning 116 tonnes of sludge had been collected. The shipping secretary said that as per the estimates of the Coast Guard, about 20 metric tonne of oil might have originally leaked at the first instance of impact.

“The assessment is based on the fact that immediately after the incident, the port authorities had placed a boom which is basically a floating device to contain any more spill,” Kumar said.

He also said that the ship was stabilised to avert threat, with the help of Indian Registrar of Shipping and DG Shipping experts, as it contained 32,000 tonnes of oil.

“They certified that the ship can be safely taken to the berth and it was taken there and was emptied safely. It was a huge and risky operation. This morning that exercise has been completed and a much larger problem which could have arisen has been averted,” he said.

He said as per a report from the principal secretary, environment, Tamil Nadu a committee has been formed comprising experts in Marine Biology and to ensure that the collected sludge does not leak into the soil, bio remedial measures including releasing bacteria which eats into the sludge has been initiated.

“Fifty bags of agent have been provided by the R&D Centre of IOCL. It has already reached the site. They have put it in a pit which is guarded by a thick plastic sheet...we expect residue will also be taken care of,” Kumar said.

Oil spill has occurred in nearly 72 km of the eastern coast from Ennore Port to Mahabalipuram. About 12 km has got affected with oil slick and about 250 metres, particularly in R K Nagar Kuppam area, is reported to be most affected.

The HC’s direction came on a PIL seeking a direction to authorities to take action against the ships which had collided, resulting in crude oil leakage from ‘Dawn Kanchipuram’.

The First Bench, comprising Chief Justice Sanjay Kishan Kaul and Justice M Sundar, before which the PIL came up, said, “On hearing the counsel for parties, it transpires that the apprehension of the petitioner is that on a principle of ‘Polluter pay’ if the ship crosses the territorial waters, the government may not be able to recover anything.”

“This of course, in no manner absolves the government of the responsibility to take necessary steps to remove the pollutant, for which the National Green Tribunal, Chennai Bench, is already stated to have been approached.”

“We are of the view that no direction can be issued in the matter, except to observe that the state government may look into the issue urgently to take such steps as deemed proper in the given situation, especially keeping in mind that as per the petitioner there has been some recent developments in terms of registration of FIR and some action post filing of the petition,” the bench said.

According to petitioner M E Raja, president, National Union of Fishermen, Royapuram, Chennai, the two ships collided off Ennore Port, Chennai, within the territorial waters of India and this resulted in leakage of crude oil from ‘Dawn Kanchipuram’ which was reported to be fully loaded tanker vessel carrying tonnes of oil.

He further submitted that crude oil started spreading on the sea water and within a day reached the shores of Ennore Beach resulting in death of many turtles and fish.

The oil spill completely stopped fishermen in the region from venturing into the sea as almost all the fish in the area covered with the oil spill have either died or moved to the deep sea, the petitioner submitted.

Apprehending that if the vessel moves out of territorial waters, the petitioner said it would be very difficult to prosecute or to recover the costs and sought a direction to authorities to take steps for initiating prosecution against the erring parties. 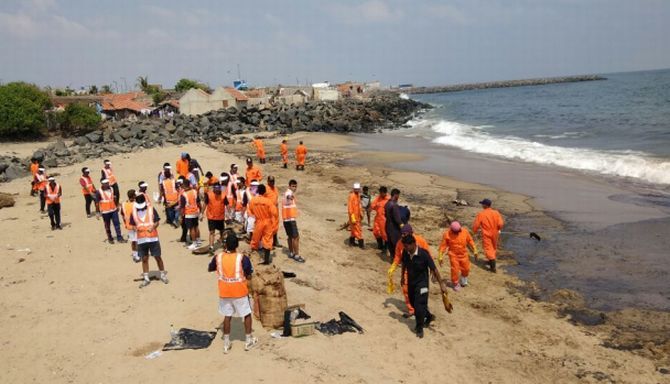 Meanwhile, political leaders in Tamil Nadu expressed concern over the oil spill and urged the Central and state government to expedite steps to clear it as early as possible.

“The Central and state government should quickly clear the spill,” he said.

He sought deployment of modern equipment to clear the oil spill.

While lauding those engaged in clearing the oil slick, he also wanted modern gadgets to be used to clear it.

The Kamarajar Port Ltd said the oil spill was noticed in the shores only one-and-half days after the collision as it could have moved far away in Bay of Bengal due to wind and sea current.

Referring to reports about its release on the day of the incident that there was no damage to environment, the port said, “The report was prepared at the time of inspection at the site by various agencies on January 28.”

The Coast Guard was informed by port authorities soon after the incident following which their ships and helicopter started monitoring the situation, the port said adding ‘the spillage was noticed in the shores only after one and half days’.

“It appears that bunker oil would have spilled when accident happened and it moved far away due to wind and current of the sea during dark hours which could not be seen by the Port officers,” a port release this evening said, clarifying its earlier stand.

Enquiries were being conducted to find out the facts, it said, adding action would be taken based on the ‘report’.

IMAGES: Coast Guard, State revenue personnel, local volunteers and fishermen removing black oil washed ashore as a thick oily tide from the sea lapped at the coast on Thursday, a day after an oil tanker and an LPG tanker collided near Kamarajar Port in Ennore in Chennai. Photographs: PTI Photo, @indiannavy/Twitter 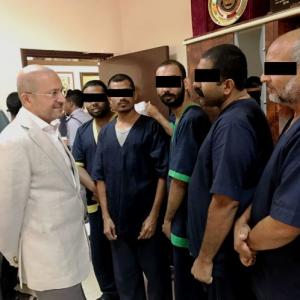 He has freed 4,500 people from UAE jails