The death toll in the Bhiwandi building collapse in Maharashtra rose to 39 on Wednesday, with the recovery of 14 more bodies overnight, police said. IMAGE: Search and relief works underway on the second day at the site of the building collapse at Bhiwandi in Thane. Photograph: PTI Photo

The dead include 18 children in the age group of two to 15, including three toddlers, an official said.

Twenty five persons have been pulled out of the debris alive so far and are being treated at hospitals in Bhiwandi and Thane, he said.

The search operation continued throughout the night despite heavy rains, the official said.

The bodies recovered from the debris were mutilated and highly decomposed as they had remained there for over 50 hours, he said.

The 43-year-old Jilani building collapsed at 3.40 am on Monday. IMAGE: Rescue and relief works underway on the second day at the site of a building collapse at Bhiwandi. Photograph: PTI Photo

Two civic officials have been suspended in connection with the collapse and an offence has been registered against the building owner, the official said.

The building in the powerloom town -- which is around 10 km from Thane -- had 40 flats and around 150 persons lived there, the official said.

The building, located at Narpoli's Patel Compound near Dhamankar Naka, collapsed while the residents were asleep.

The building was not in the list of dilapidated structures of the Bhiwandi-Nizampur Municipal Corporation, he said. 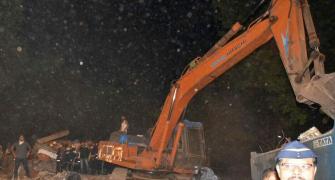 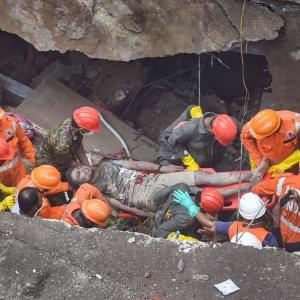