Protests against the amended Citizenship Act continued on Saturday in West Bengal and in the North East, which saw several incidents of arson and the killing of a person. 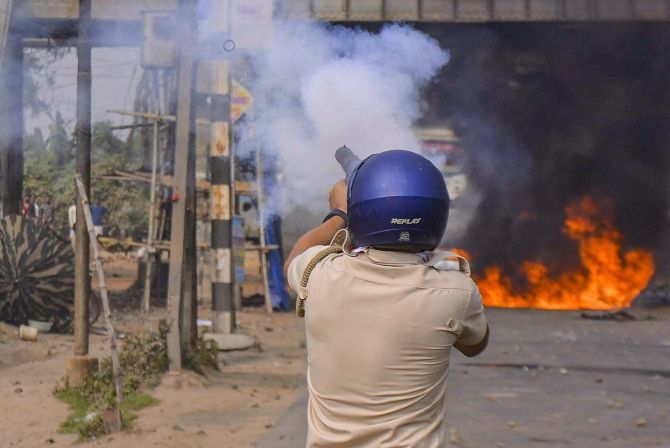 IMAGE: A police personnel fires tear gas to disperse protesters during a demonstration against the passing of Citizenship Amendment Bill at Santragachi in Howrah district of West Bengal. Photograph: PTI Photo

Nagaland observed a six-hour shutdown against the legislation.

In West Bengal, where the Trinamool Congress government has been opposing the Citizenship Amendment Bill, arson by protesters was reported from various areas.

Buses, a railway station, a toll plaza in Muslim-dominated Murshidabad were set on fire by protesters, officials said.

In Assam indefinite curfew was relaxed for several hours in Dibrugarh and Guwahati, which has emerged as the epicentre of protests against the contentious piece of legislation.

Curfew was also relaxed in the Meghalaya capital Shillong.

In Assam the toll in the large scale protests against the act rose to three as suspected miscreants set ablaze an oil tanker at Dhekiajuli in Sonitpur district and killed its driver during curfew on Friday late night.

Two others had been killed during the violent protests against the Citizenship Amendment Bill in Guwahati earlier
this week. 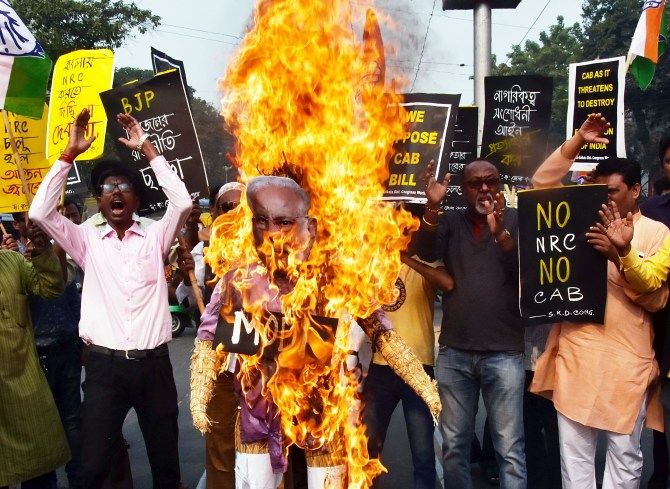 Suspension of internet services across Assam was extended for 48 hours till December 16 to prevent misuse of social media in disturbing peace and to maintain law and order in the state, additional chief secretary (home and political department) Sanjay Krishna said.

All Assam Sudents Union, which is spearheading the agitation, kept up its protest meetings along with Asom Jatiyatabadi Yuba Chatra Parishad and 30 other indigenous organisations in the Brahmaputra Valley.

Train services between Guwahati and the rest of the country was disrupted in a rail blockade called by the AJYCP, which is demanding the implementation of Inner Line Permit in the state. 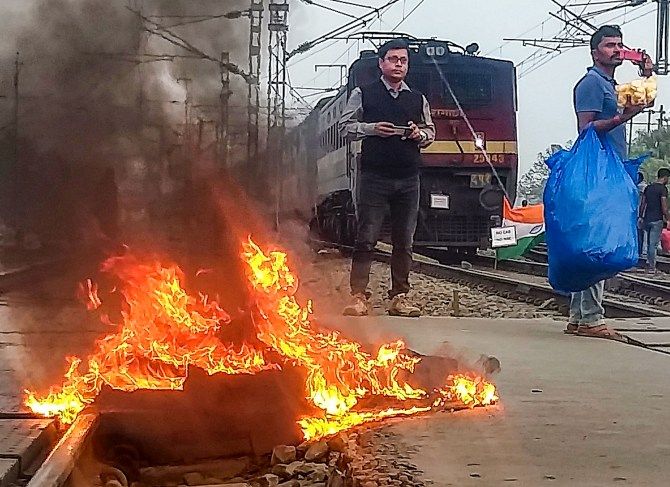 A NF Railway spokesman said that all trains to upper Assam districts have been terminated in Guwahati while all long distance trains leaving it will resume their onward journey after the blockade is lifted by 5 p m.

Curfew was also relaxed in Shillong during the day as the law and order situation improved.

The regulation had been imposed in parts of the city amid violent protests against the amended Citizenship Acted, officials said.

The Meghalaya government has decided to convene a special one-day session of the assembly to bring in a resolution to implement the Inner Line Permit regime in the state. 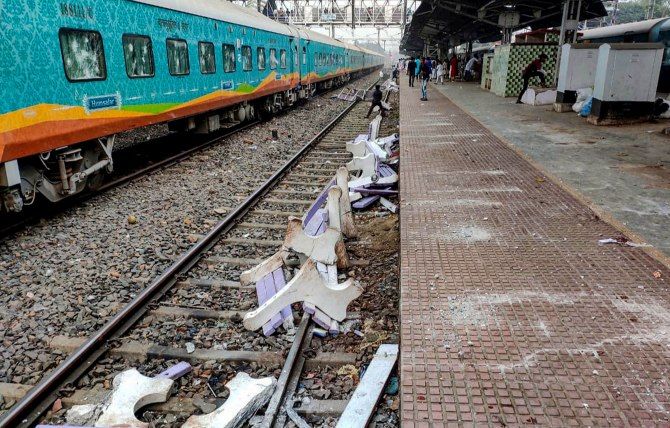 IMAGE: Vandalised railway station property lies on the tracks after it was ransacked by protesters agitating against NRC and CAB issue at Uluberia Station in Howrah district of West Bengal. Photograph: PTI Photo

In Nagaland schools and colleges were closed, markets were shut and vehicles plied in fewer numbers during the six-hour shutdown since 6 am by Naga Students' Federation against the amended Citizenship Act, officials said.

In West Bengal, where violent protests against the citizenship legislation began on Friday, a portion of Sankrail railway station complex in Howrah district was set on fire on Saturday by a mob which also thrashed security personnel guarding it, officials said.

Hundreds of people protesting against the amended Citizenship Act since morning blocked roads in and around the Sankrail railway station and also set a few shops on fire, police sources said.

Train services were affected in Howrah and Sealdah sections. 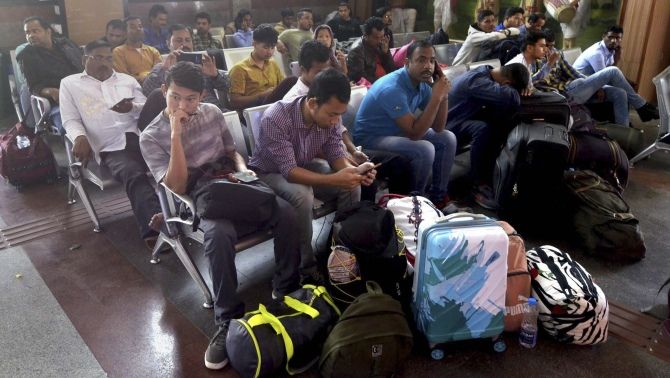 IMAGE: Passengers stranded at Guwahati railway platform as many trains were cancelled due to anti-Citizenship Amendment Bill protest, in Guwahati. Photograph: PTI Photo

A number of private and public buses were torched by angry protestors on the arterial Kona Expressway that connects NH2 (Delhi Road) to NH6 (Mumbai Road) near the city and in the districts and a toll plaza was set ablaze in Murshidabad district.

Chief Minister Mamata Banerjee warned of strict action against perpetrators of violence and appealed to people to protest democratically and maintain peace.

"Do not take up law in your hand. Do not put up road blockades and rail blockades and create trouble for the common people on the roads. Do not cause damage to government properties. Strict action would be taken against those who are
found guilty in creating disturbances," a CMO statement quoting her said.

She also iterated that the amended Citizenship Act and the proposed country-wide NRC will not take effect in the state.

In Patna, Lalu Prasad's Rashtriya Janata Dal has given call for a Bihar bandh on December 21 in protest against the amended Citizenship Act, alleging that it has blown the Constitution to "smithereens".

The legislation has put the Northeast on the boil as people fear that it may exacerbate the problem of illegal immigration, while Muslims across the country apprehend that the move could be a precursor to the country-wide implementation of the National Register for Citizens. 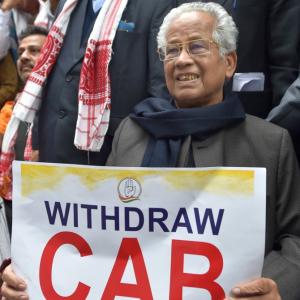 US, UK, other countries issue advisory for NE states