Hillary Clinton on Friday traded barbs with Donald Trump and poked fun at him, describing him as “healthy” as the horse Russian President Vladimir Putin rides on and wondered how Barack Obama would get past the “Muslim ban” for a presidential photo-op in a Trump White House. 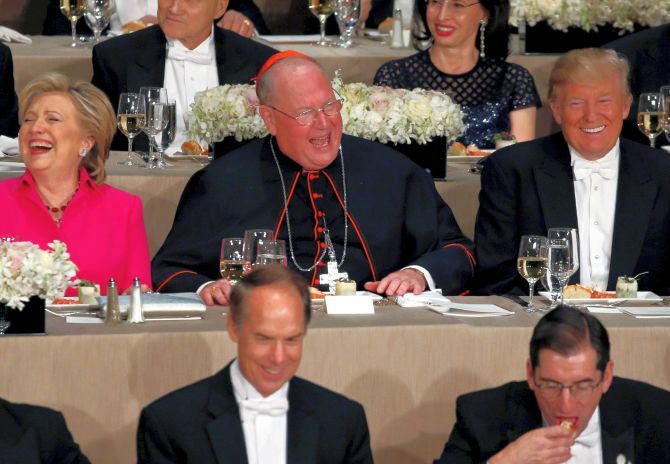 Clinton and Trump came face-to-face at a white-tie charity dinner at the Waldorf Astoria, barely 24 hours after they clashed with each other at the third and final vitriolic presidential debate in Las Vegas.

The two were sitting one seat away from each other at the 71st annual Alfred Smith charity dinner, which historically has been a good-natured roast and a presidential campaign ritual of levity where the candidates make self-deprecating remarks, indulge in light-hearted banter and poke fun at each other.

Clinton, who spoke after Trump said it is “amazing” she is up here after him.

The Democratic nominee took a jab at Trump’s perceived closeness with Russian President Putin when she brought up the 70-year-old reality TV star’s concerns during the election campaign over her health.

The 68-year-old former secretary of state said Trump has been very concerned about her health throughout the campaign.

“Donald really is as healthy as a horse, you know the one Vladimir Putin rides around on,” a reference to a famous picture of a bare-chested Putin riding his horse.

She also said that there were no teleprompters at the dinner, which was good since such devices “are hard to keep up with and even harder when you are translating from the original Russian”.

She then made a reference to Trump’s proposed ban on Muslims and linked it to his skepticism over Obama’s birthplace and faith.

Clinton said if Trump does win the elections, then things will get “awkward” at the annual presidents’ day photo when all the former presidents gather at the White House. “And not just with Bill. How is Barack gonna get past the Muslim ban.”

The audience laughed and cheered as Clinton made her remarks, occasionally giving her an applause. Trump, who was accompanied by his wife Melania, laughed at Clinton’s jokes, occasionally leaning in towards his wife and grinning.

The 70-year-old Republican nominee began his remarks with some light-hearted comments, including jokes about his “beautiful hands” and that Clinton appearing at the event without charging any fees for it, but was booed as he shifted gears from the self-deprecating humorous tone of the event to call Clinton “corrupt”.

Trump said despite the “heated” back and forth between them during the three debates and the election campaign, “we have proved that we can actually be civil to each other”.

“Just before taking the dais, Hillary accidentally bumped into me and she very civilly said ‘pardon me’,” he said, drawing the most laughs from the audience, even from Clinton.

“And I very politely replied ‘Let me talk to you about that after I get into office’. Just kidding,” he said.

Taking a swipe at the way Trump talks about women, Clinton said people look at the Statute of Liberty and see a “proud symbol of our history as a nation of immigrants, a beacon of hope for people around the world”.

“Donald looks at the Statue of Liberty and sees a four, may be a five if she loses the torch and tablet and changes her hair,” she said, a jab at Trump’s way of using numbers to describe a woman’s size.

“Come to think of it, you know what would be a good number for a woman? 45,” Clinton said, referring to the number of the next US president. All eyes were on the two presidential candidates as they arrived for the dinner. Clinton and Trump did not shake hands at the beginning of the dinner and only did so very briefly at the end of the event. The two had not shook hands at the third presidential debate as well.

Clinton began her remarks with a self-deprecating joke, saying the event was so special that she took a break from her “rigorous nap schedule to be here”. She said it was a “treat” for those present in the room too to listen to her because she “usually charges a lot for speeches like this”.

With Trump calling for Clinton to take a drug test before the final debate, Clinton said she was “flattered” that Trump felt she had used some sort of performance enhancer.

“Actually I did,” she said, “it’s called preparation.”

She joked about her infamous “basket of deplorables” comment that she had made to describe Trump’s supporters.

“There are a lot of friendly faces in the room, and I would put you all in a basket of adorables,” she said.

On Trump’s criticism that Clinton does not have the stamina to be president, she said she had to listen to him for three full debates “and he says I don’t have any stamina”.

“That is four-and-a-half hours, I have now sI,” she said.

Clinton said if Trump does not agree with anything she is saying, he should feel free to stand up and shout “wrong while I’m talking” and added that if Trump is not happy with the way the event turns out “it must be rigged”.

Trump said he has known her for a long time “and this is the first time ever that Hillary is sitting down and speaking to major cooperate leaders and not getting paid for it”.

He was heckled again when he said, “I wasn’t really sure if Hillary was going to be here tonight because, I guess, you didn’t send her invitation by email. Or maybe you did, and she just found out about it through the wonder of WikiLeaks.”

“We’ve learned so much from WikiLeaks. For example, Hillary believes that it is vital to deceive the people by having one public policy and a totally different policy in private,” Trump said as he was booed by the crowd.

Being heckled at a charity dinner attended by some of the most elite names in US politics, media and business was seen as unprecedented. Will totally accept election results if I win, says Trump 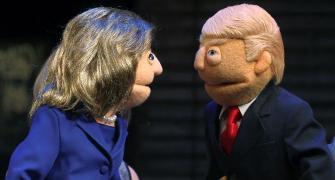 The numbers are in...Clinton knocks out Trump in final debate 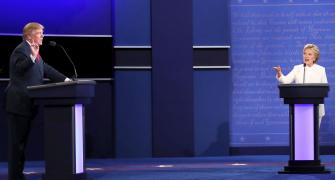 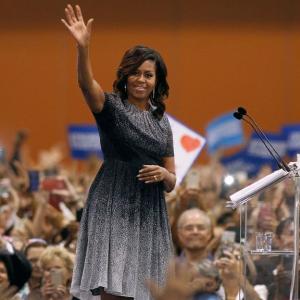 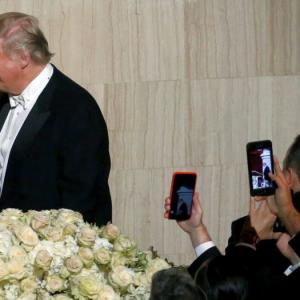