Opposition People's Democratic Party on Thursday accused Jammu and Kashmir Chief Minister Omar Abdullah of dragging the state assembly into the Afzal Guru issue and refusing to take a stand when the clemency resolution came up for discussion in the House.

"The chief minister gave an impression that he has taken a stand on Afzal Guru by tweeting. The assembly was not involved in it but got involved (because of his tweets) and in the end the assembly was hanged," PDP president Mehbooba Mufti told reporters Srinagar.

"As the leader of the house, why he did not tell his coalition partners to allow the proceedings and impress upon them the importance of the resolution?" she asked.

An impression has been created that the state legislature is not empowered even to discuss the clemency resolution, Mehbooba said.

The PDP leader said her party MLAs remained silent during the Wednesday's pandemonium in the House as she had given an assurance to speaker Mohammad Akbar Lone of their cooperation in ensuring smooth functioning of the assembly.

Reacting to the criticism on her party's silence by Lone, the PDP president said it was "perhaps for the first time in the history of the country that a speaker says that he adjourned the House because the opposition did not rush to the well."

Mehbooba claimed she was feeling suffocated in the assembly as the speaker does not allow her party to raise issues of public importance. "Marshals are being used when we protest but yesterday (Wednesday) they (Congress and BJP MLAs) were being escorted to the well," she alleged.

Asked about the criticism leveled against her by the speaker today, Mehbooba alleged, "it is not about me or him. He is a puppet National Conference wants to push us out so that its monopoly (over the state politics) can resume."

The J-K government had given details of rape cases, along with the identity of victims, of the last five years in response to a question in the Assembly on Tuesday. 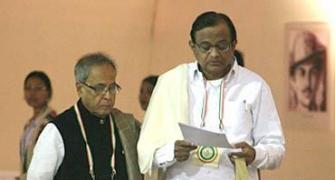