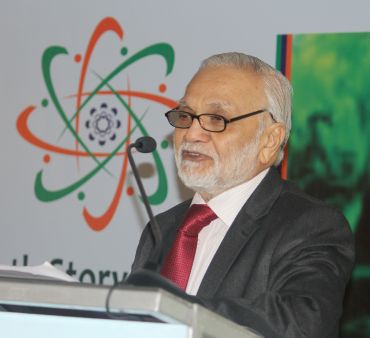 Rediff.com's P Rajendran attends a seminar on pure science at the second day of the Pravasi Bharatiya Divas event in Kochi.

That there was some confusion about the definition of 'pure science' was clear when three of five speakers at the Seminar on Pure Science at the Pravasi Bharatiya Divas event in Kochi on Tuesday addressed either applied science -- aka technology, that colorful and utilitarian offshoot of pure science -- or sought, among other things, the use of theology to resolve the subtler questions of material science.

The well-meant intention behind the seminar appeared to be to focus on the need for research unburdened by mercenary interests, since underlying principles need to be understood before they can be applied.

Given that most conferences do not focus so much on knowing the science as using it, the novel approach was refreshing. But even the best of intentions is not quite enough.

Thomas Abraham, the moderator for the seminar and the president of Innovative Research and Products, a nanotech firm based in the United States, pointed out some problems in Indian science when he said he had heard that much of the pure science research done in India is uncontrolled, irrelevant or concentrated in the hands of a few people atop the totem pole.

He requested that the panelists address these claims, and the charge that many ideas in circulation are either borrowed or uncreative. He also charged that many students from top scientific and engineering institutions also have been drifting to finance and management, leaving only mediocre students who could not bring quality into the institutions.

He pointed out that INSEAD's Global Innovation Index, which covers 125 countries, places India around the halfway mark, far behind nations such as Mauritius, Saudi Arabia and Guyana. Few Indians based in India show up in top science journals though a disproportionately large number from the diaspora do.

He asked why India could not do what Brazil and China did: send over to foreign labs students who could infuse refreshing new ideas into their scientific system.

Three of four Indian Nobel laureates in the pure sciences came from the diaspora, Abraham said, asking why Indians were able to achieve world-class results only when they left their country of origin.

Lord Bhikhu Parekh, a political philosopher at the University of Westminster who is on Prime Minister Manmohan Singh's advisory committee, lived up to his promise of speaking of forms of inquiries that were not about quick gratification.

"In a knowledge-based economy, a country like ours will be left far behind by smaller countries like South Korea or Israel or even smaller countries if we do not keep pace with others, let alone outpace them in the fundamental sciences," he said.

He included theoretical inquiries in the pure sciences but said even if fields like his, philosophy, India had little to show in the last 60 years.

"If you take the citation index (a measure of how many times an article is cited in other research papers), show me which one of the Indian scientists is cited more than two or three times... in any international journal," Parekh asked.

He quoted Dr Sabyasachi Bhattacharya, the former director of the Tata Institute of Fundamental Research, as saying that there is no lack of money, only that of trained people and ideas. Parekh said there were no top pure science journals published in India that a good foreign scholar would submit a paper to.

He dismissed as specious the argument that India had a lot to grow since it has been around in its current form for only 65 years. He said that South Korea, China and Israel were further behind but were able to turn the corner when India has yet to find the right direction to take.

He said India has not been able to do as well as it should, among other things because scientific training is poor.

He spoke of finding out how poorly prepared he was to ask the right questions 55 years ago when he took his first class at the London School of Economics with Karl Popper, one of the most famous philosophers of science.

"I remember attending his seminar and on the very first day he made me feel like an idiot. Although I had done my MA, and I was a university lecturer, I'd never learned to think," Parekh said. He said that he has seen students from India's finest universities, but found they could not measure up to undergraduates at his own university.

"The first question they would ask is: 'Professor, what should I be working on?' My English students would never ask such a question."

He said there was a tendency to rote learning of scientific material but not to ask critical questions, to think for themselves and to think theoretically, as science requires.

He said poor leadership was another problem in Indian science, a fact he himself saw when he was the vice-chancellor at the Maharaj Sayajirao University of Baroda.

"Some of our finest students were stuck. There are two or three very eminent biological scientists from Baroda University who I had to liberate from their heads of department and send them abroad before they could rise and flower. Stuck in the university there was no hope for them."

India also faced a problem in that India's resources, while plentiful, are diffused, Parekh said.

"You can't develop your centres without concentrating your resources -- human resources and material resources," he said.

Parekh also took issue with the insularity in the Indian scientific system.

"We have never advertised our positions abroad. China does. Malaysia does," he said, going on to describe how his own efforts to hire a political philosopher with an ad in the London Times Literary Supplement were shot down. He was told a foreigner could not be recruited.

He described the president of Singapore asking him if Indians were racist since they did not employ outsiders. Parekh said even the Indian prime minister has told him that it was against the law. While he disagreed with the idea but wondered why even the non-resident Indians were not being used. He said that all the countries like China and Singapore that had turned the scientific corner had a high international faculty representation.

There should also be opportunities for professors to go beyond the standard promotions and accolades. Like the royal societies in the United Kingdom, there needs to be national societies of those with top academic standards, Parekh said.

Finally, he said, there was a need to change training methods, not just when students had turned into scientists but when they were still in school.

Resources could be concentrated -- bringing together a critical mass of 20-30 scientists in a field, he said, before waxing poetic:

He said this was where the diaspora had a role to play. While individual visits helped a bit, it was institutional ties across countries that would do more, even involving sending students abroad to bring back new ideas. Parekh said there were two reasons why Indians abroad did better than those back home.

"Here you become lazy. Your intelligence is not awakened. Pressure is not put upon you," he said. The second thing was that the lack of a process to weed out those who did not perform.

Shekhar Mishra, who is actually part of the kind of institutional collaboration Parekh described, also addresses at work the very fundamental questions of pure science -- rare and still mysterious forms of matter and energy, and matter -- though his research in India addressed the development of energy in the form of thorium plants.

He admitted that pure science research was needed before getting to the applied kind, and said the feudal nature of science in India is changing.

Mishra said his experience working with about 20 institutes in India has been very positive.

"It takes time to build trust," he said. "A foreigner cannot come and say, do it my way. First you have to understand why the (old) way is better. Maybe the people in India are doing just fine. Whenever people get trained in the Western world we just think our way is better."

Mishra described India as moving in the right direction and that the hierarchical system in place would likely go away in time.

It was pointed out that Parekh's tough carrot, stick and innovation solution to the problems Indian science faced was fundamentally different from that of another speaker who sought a holistic approach to the problems of higher-end physics that also had a place for spirituality.

"I am trying to find a practical solution to the problem," Mishra said with a laugh. "Otherwise you will not win." 'Should I pursue an MBA from India or abroad?' 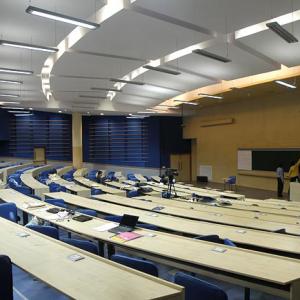