10 killed, 39 injured in three train accidents in UP

Ten people were killed and 39 injured, 15 of them seriously, in three accidents involving five passenger trains in Uttar Pradesh amid dense fog and near zero visibility conditions early on Saturday.

Commissioner, railway safety, will start the inquiry in the accident on Monday.

Railways have announced a compensation of Rs 5 lakh to the family of those killed, Rs 1lakh to those seriously injured and Rs 10,000 for those with minor injuries.

The Delhi-Allahabad Prayagraj Express was at the station when the Gorakhdham Express hit it from behind in dense fog, Public Relations Officer of North Central Railway (Allahabad) Amit Malviya said.

Senior Bharatiya Janata Party leader Murli Manohar Joshi, who was travelling to Allahabad on the Prayagraj Express, was unhurt.

Congress Member of Parliament from Bahraich Kamal Kishore and his wife Poonam Kishore were travelling in the Gorakhdham Express.

The guard of Prayagraj Express was killed in the accident, a railway official said. The ladies unreserved coach next to the guard's compartment was severely damaged in the collision leading to two bogies climbing over each other.

In another accident, the Bihar-bound Delhi-Sitamarhi Licchavi Express rammed into the stationary Magadh Express at Sarai Bhopat near Etawah at around 8 am, railway officials said.

The driver of the Licchavi Express was seriously injured as the engine of the train ploughed into the Magadh Express in foggy conditions.

While the brake van of the Prayagraj Express derailed, the engine of the Gorakhdham Express was damaged.

In Pratapgarh, 61 km from Allahabad, the Sarayu Express rammed into a tractor trolley at an unmanned railway crossing. While there were no reports of any casualty, the engine of the train was damaged in the accident.

The injured were admitted to Hallot, Raja Ram and BLC hospitals in Kanpur.

Rail traffic on the Delhi-Kanpur section has been severely disrupted due to the accidents.

Two control rooms set up at Allahabad and Kanpur can be reached at 05322-408149, 05322-287353 and 05124-2323015/16/18.
Source: PTI© Copyright 2021 PTI. All rights reserved. Republication or redistribution of PTI content, including by framing or similar means, is expressly prohibited without the prior written consent.
Related News: Delhi-Allahabad Prayagraj Express, Allahabad, Gorakhdham Express, Delhi-Sitamarhi Licchavi Express, Magadh Express
Print this article 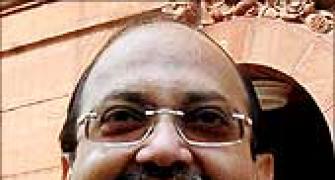