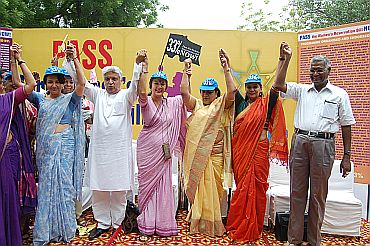 Political leaders, artistes and social activists gathered near Jantar Mantar to demand the immediate passage of the 33% Women's Reservation Bill in the monsoon session of the Parliament, which began on Monday.

The rally, named The Alliance for 33%, was a collective of more than 500 women's groups, including political leaders and artistes.

Veteran lyricist Javed Akhtar said it's shameful that in the 21st century there is a need to hold a public meet to talk of women empowerment.

"There are two kinds of people against women emancipation: Those who blatantly say that women must confine to their homes and there is no such thing as girl education, this bunch is easy to recognise. And then there is a second kind, who comes up with the ridiculous ideas of reservation-within-reservation, which is nothing but a sly way of averting the real issue," he said in his usual rhetoric manner.

"I am wary of the second kind. My question to those demanding separate OBC reservation is that where were you all this while, why have you overlooked the century-old denial rights of women rights," he added.

While Karat called it as a 'sabotage' to kill the bill, saying that the opposition is not serious about the Dalit representation.

A member of YWCA believed the argument that the bill discriminates against Dalits and OBC's is misleading.

"It needs to be understood that even without the aid of reservations, OBC representation in state assemblies and Parliament has increased significantly after Mandal Commission's recommendation. In the present Lok Sabha, 15 of the 50 women MPs belong to the OBC category, which comes to 30% female OBC representation," she said.

"It's a long drawn battle and we will not give up until the bill gets to see the light of the day," Tagore said. 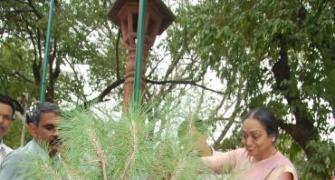 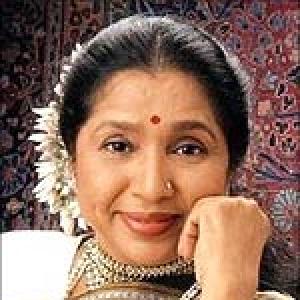