A forensic expert, deposing in the twin Aarushi-Hemraj murder case, on Tuesday told a court in Ghaziabad that a pillow recovered from the teenager's room bore evidence of a "partial male DNA".

The senior scientist, B P Mahaptra of Central Forensic Science laboratory, told the court that besides the partial male DNA, blood stains were found on the pillow that matched Aarushi's group.

Female DNA and blood stains found on the wall and door of Aarushi's room also matched her group, he said.

The CBI on Tuesday produced 13 exhibits out of 29 parcels in the special trial court.

Mahaptra told the court that a bed sheet found from Hemraj's room bore his blood stains, "but DNA was not generated".

Hemraj's blood stains and a partial male DNA were also found on the gate leading to the terrace where his body was found, Saini said.

Meanwhile, defense counsel Manoj Shishodia told PTI that an application was today moved before the trial court seeking the letters of the Superintendent of Police (CBI) written to the forensic department.

The hearings will continue on Wednesday 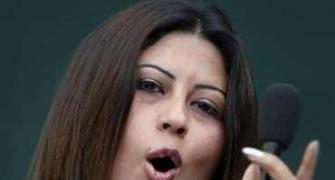 Blood traces of Aarushi, Hemraj found on a whisky bottle