Parliament failed to function for the fifth consecutive day on Thursday with the Opposition insisting on a joint parliamentary committee probe into 2G spectrum allocation and Congress and Janata Dal  Secular hitting back, alleging land scams involving the Bharatiya Janata Party-led government in Karnataka.

Rajya Sabha adjourned almost immediately after it met for the day with Opposition members creating an uproar, while Lok Sabha was first adjourned till noon, doing away with the Question Hour, and then for the day amid similar scenes.

Opposition BJP and All India Anna Dravida Munnetra Kazhagam members in the Rajya Sabha rushed to the Well soon after the House assembled. Deputy Chairman K Rahman Khan told the agitated members to go back to their seats so that he could take up an obituary reference to condole the death of 70 persons in a building collapse in east Delhi.

But BJP and AIADMK members rushed into the Well, shouting "we want JPC".

Prime Minister Manmohan Singh was present in the House when it witnessed the commotion. At one point, some members from Treasury benches including Mabel Rebello too started moving towards the Well but were prevented from doing so by Congress leader Rajeev Shukla.

The Congress members then stood in the aisles raising certain issues that could not be heard in the din. Minutes into the pandemonium, Khan adjourned the House till Friday.

Similar scenes were witnessed in the Lok Sabha where BJP members rushed into the Well and were joined by those from Samajwadi Party, AIADMK and Shiv Sena. They raised slogans like "We want JPC".

On the other hand, Congress members were in the aisle waving placards demanding "end to anarchy" in the BJP-ruled Karnataka.

"Dismiss the BJP government. Seek Fresh mandate in Karnataka"; "We stand for moral values, what do you stand for?" read the placards waved by the Congress members.

Even former prime minister H D Deve Gowda was seen waving a placard against the B S Yedyurappa government in Karnataka. Lok Sabha was then adjourned for the day. Outside the House, Congress MPs from Karnataka sat on a dharna in front of Mahatma Gandhi's statue, demanding action against the chief minister.

Earlier this week, the comptroller and auditor general had indicted the then telecom minister A Raja for irregularities in allocation of 2G spectrum causing a presumed loss of Rs 1.76 lakh crore to the exchequer, with the Opposition demanding a probe by the JPC leading to disruptions. No substantial business has been carried out in both the Houses of Parliament since the winter session began on November 9. 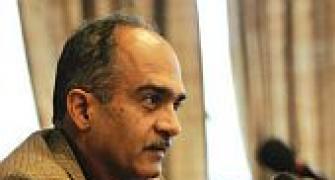 Raja targeting PMO to save himself: Fali Nariman