"Such efforts between the two sides would enhance peaceful relations and promote people-to-people contact," Zaman, who headed a six-member delegation, told mediapersons at the Attari-Wagah border. He said his meeting with Pillai was aimed at promoting and strengthening peace between the two neighbours.

To questions on the agenda before the meeting beginning on Monday, he said all core issues would be discussed in a peaceful atmosphere. Officials said in Delhi that the two-day meeting will deliberate on a wide range of issues, including Islamabad's reluctance in co-operating fully in bringing to justice the perpetrators of 26/11 attacks.

Appreciating the initiative of Prime Minister Manmohan Singh in extending invitations to his Pakistan counterpart and President Asif Ali Zardari to watch the World Cup match between the cricket teams of the two countries on Indian soil, Zaman hoped it would create peaceful atmosphere between India and Pakistan.

Zaman said he would try his level best to watch the match at Mohali on Wednesday during his official tour in India and wished all success to the Pakistani team.

Earlier, on his arrival at the Attari border, Zaman was accorded a warm welcome by senior officials in the district and those from the Border Security Force. 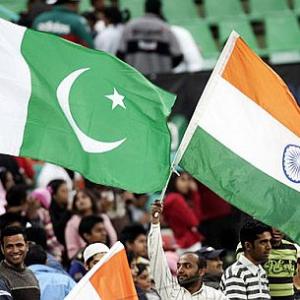