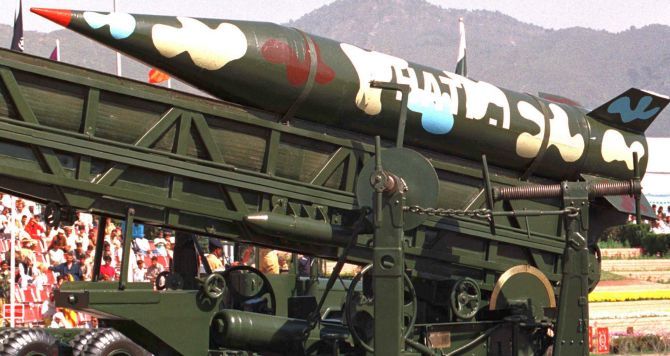 Pakistan continues to be ahead of India when it comes to possessing nuclear warheads, with China having double the quantity, according to a report by a leading Swedish think-tank.

Pakistan is believed to have 140-150 nuclear warheads this year, 10 more than last year. In contrast, India is said to have 130-140 nuclear warheads, according to the annual nuclear forces data by Stockholm International Peace Research Institute.

“India and Pakistan are both expanding their nuclear weapon stockpiles as well as developing new land, sea-and air-based missile delivery systems,” it said.

“China continues to modernise its nuclear weapon delivery systems and is slowly increasing the size of its nuclear arsenal,” SIPRI said.

Russia and the United States hold over 92 per cent of the total warheads, it said.

SIPRI said nine countries -- the US, Russia, Britain, France, China, India, Pakistan, Israel and North Korea -- had 14,465 nuclear warheads at the beginning of 2018, of which 3,750 were actually deployed.

Countries possessing nuclear weapons as in 2018

The reduction is largely due to the arms control commitments by the US and Russia in the 2010 Treaty on Measures for the Further Reduction and Limitation of Strategic Offensive Arms, the Stockholm-based organisation said.

Despite making limited reductions to their nuclear forces, both Russia and the USA have long-term programmes under way to replace and modernise their nuclear warheads, missile and aircraft delivery systems, and nuclear weapon production facilities, it said.

SIPRI warned that modernisation of nuclear weapons continues despite a decline in the total number of nuclear warheads.