A Pakistani judicial panel probing a mysterious memo sent to the United States has rejected Husain Haqqani's plea that ex-ISI chief Ahmed Shuja Pasha appear as a witness, amid claims by the former envoy that the commission has been "converted into a virtual prosecution" against him.

The Supreme Court-appointed commission, which has been investigating the memo that had sought US help to stave off a feared coup in Pakistan following Al-Qaeda chief Osama bin Laden's killing last year, also refused to accept Haqqani's written explanation regarding the use of secret diplomatic funds during a hearing on Thursday.

The three-judge panel resumed its hearing yesterday after a short break.

Haqqani was forced to resign as Pakistan's ambassador to the US after American businessman Mansoor Ijaz made public the memo last year.

Ijaz claimed he had drafted and delivered the memo to the then US military chief on the instructions of Haqqani.

The government has dismissed Ijaz's claims.

After Ijaz deposed via a video link from London, Haqqani too sought the same facility but his request was turned down. Haqqani is currently in the US and has said he cannot return to Pakistan to testify as he is being treated for a heart condition.

Zahid Bukhari, the counsel for Haqqani, presented a written application that asked for former ISI chief Pasha to appear before commission as a witness.

However, the panel rejected the plea during a session held behind closed doors at the Islamabad High Court complex.

During the session, two officials of Foreign Office briefed the commission on the use of secret diplomatic funds by Haqqani last year, media reports said.

The officials told the panel about procedures and rules under which envoys spend such funds.

The commission expressed its "lack of confidence" over a written explanation submitted by Haqqani and observed that he had not followed rules and regulations.

The panel also turned down Bukhari's request for the commission to provide him video recordings of its proceedings.

Haqqani on Thursday repeated his demand for "equal treatment" with Ijaz so that he could testify via a video link and responded to points raised during the commission's last hearing.

"Although the honourable commission was constituted to conduct an inquiry and it had been said at the outset that its proceedings would be inquisitorial in nature, it has been converted into a virtual prosecution against me without even the filing of a formal charge or registering a case," Haqqani said in his application. 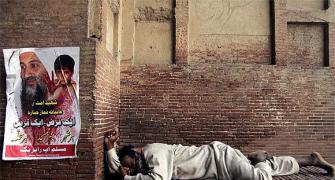