Pakistan President Asif Ali Zardari has said that his government has directed officials to conclude negotiations with the United States for reopening key supply routes to NATO troops in Afghanistan.

In a speech to leaders from countries in the NATO-led force in Afghanistan, Zardari said that the November 26 incident in which 24 of his soldiers were killed in a cross border firing was a "set back" that forced his government to review its engagement and cooperation with them.

Addressing the meeting in Chicago, which among others was attended by US President Barack Obama, Zardari said the Defence Committee of the Cabinet has considered the issue and decided to direct the relevant officials to conclude negotiations for resumption of the Ground Lines of Communication.

However, he did not give any timeline as to when these routes would be opened.

Counting on Pakistan's commitment to support the efforts of the international community to promote peace and stability in Afghanistan, NATO Secretary General Anders Fogh Rasmussen, said Islamabad would reopens key routes in the near future.

Rasmussen said he did not expect an agreement on Pakistan transit route to be reached at this summit.

"That was not planned. We invited President Zardari because we want to engage Pakistan in a constructive dialogue. We need a positive engagement of Pakistan if we are to ensure long term peace and stability in Afghanistan and in the region. That is why we invited him," he said.

"I was encouraged by his statements also in the (NATO-led ISAF) meeting that Pakistan stays committed to finding a long term sustainable solution to the conflict in Afghanistan.

Obviously it is in the interest of Pakistan to peace and stability in Afghanistan and the President confirmed today that this is the position of Pakistan," he said.

"So on that basis, I express some optimism as regards to the possibility to see a reopening of the transit routes in the very near future."

These crucial supply lines -- which were once considered as the lifeline of US and NATO forces in Afghanistan -- were closed by Pakistan in November after the incident in which 24 Pak soldiers were killed in a NATO cross border fire.

Since then NATO and US forces are using the highly expensive northern distribution network to send supplies to Afghanistan.

"We would like to see the reopening of the transit routes as soon as possible," Rasmussen told reporters.

Zardari told the gathering that the country's Parliament has also recommended that foreign fighters and non-state actors seeking to destabilize Afghanistan and the region, if found on our soil, must be expelled.

"We are devising a comprehensive plan for this purpose. This would require the support of the international community both in terms of resources and capacity building. It will also require measures aimed at the economic well-being of the people of the areas affected by the military action," he said.

Describing the Chicago meeting as a defining moment for Afghanistan and the region as a whole, Zardari said that a peaceful, prosperous and stable Afghanistan is in Pakistan's national interest.

"As the government and people of Afghanistan increasingly assume the security responsibilities for their country, I am confident that they will meet this challenge. Success in Afghanistan will confirm once again that partnerships can and do transform the fortunes of a nation," he said.

"We remain supportive of all efforts for peace and reconciliation in Afghanistan. We firmly believe that only an inclusive intra-Afghan dialogue can lead to sustainable peace in Afghanistan," he said. 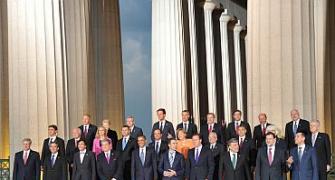 Webcam case: US court sends Ravi to jail for 30 days