'We have worked to create road blocks in the path of those who thought that there was space for conventional war despite Pakistan's nuclear weapons.'

'Pakistan's nuclear weapons programme is not open-ended and aligned with India only.'

'In this unstable regional environment, one nuclear power is trying to teach lessons to another nuclear power through the medium of small arms and mortar shells on the Line of Control, and bluster.'

'A historic opportunity of a lifetime beckons the leaderships of India and Pakistan to grasp, sit together and explore the possibilities of conflict resolution.'

Aziz Haniffa/Rediff.com reports from Washington, DC on the way the Pakistan army views the Indian threat. 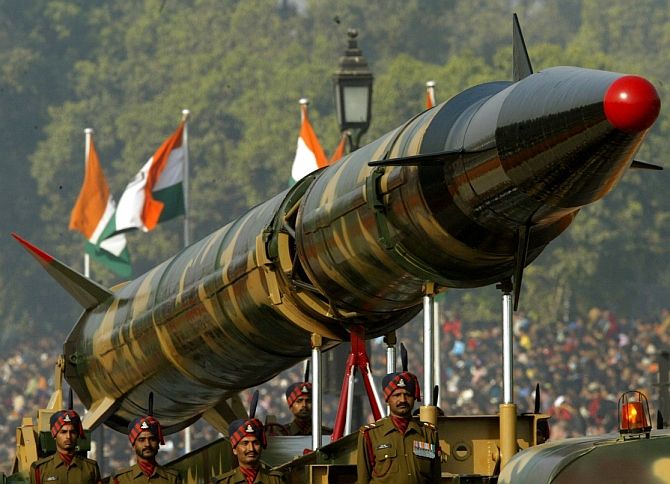 Lieutenant General Khalid Kidwai(retd), who headed Pakistan's Strategic Plans Division for over 15 years and is adviser to the country's National Command, said his country has blocked the avenues for serious military operations by India by introducing a variety of tactical nuclear weapons in its arsenal.

General Kidwai, one of Pakistan's most decorated generals, argued that tactical nuclear weapons in Pakistan's arsenal made nuclear war with India less likely, adding, "I am fond of calling them weapons of peace -- the option of war is foreclosed."

The general was speaking at the Carnegie International Nuclear Policy Conference in Washington, DC.

"For 15 years, I and my colleagues in the SPD worked for deterrence to be strengthened in South Asia comprehensively so as to prevent war, to deter aggression, and thereby for peace, howsoever uneasy, to prevail," General Kidwai added.

"We have," General Kidwai said, "worked to create road blocks in the path of those who thought that there was space for conventional war despite nuclear weapons of Pakistan."

"By introducing a variety of tactical nuclear weapons in Pakistan's inventory, and in the strategic stability debate," he reiterated, "we have blocked the avenues for serious military operations by the other side."

"The naivete of finding space for limited conventional war despite the proven nuclear capabilities of both sides went so far as to translate the thinking into an offensive doctrine -- the Cold Start Doctrine -- equivalent to a pre-programmed, pre-determined shooting from the hip posture, in quick time, commencing at the tactical level, graduating rapidly to the operational-strategic level, strangely oblivious of the nuclear Armageddon it could unleash in the process." the general said, targeting the Indian Army's Cold Start doctrine.

"It clearly was not thought through," General Kidwai felt.

"It was quite surreal when Kidwai was clinically talking about the needed range of Pakistan's nuclear weapons to cover entire Indian land mass," one observer at the conference pointed out, "particularly vis-a-vis the Shaheen-3 with its 2,750 kilometres range, sufficient to hit the Andaman and Nicobar islands, which many believe may be developed as India's military bases."

When asked by Peter Lavoy, the moderator of the discussion and the newly-minted senior director for South Asian Affairs at the National Security Council, if Pakistan "considered the political impact of long-range nuclear weapons on non-Indian targets," General Kidwai shot back, "Did India and the other nuclear countries do so too?"

Asked if Pakistan's nuclear weapons programme would ever stop expanding, General Kidwai again invoked India, saying, "It is not open-ended and aligned with India only."

"The two realities of today's South Asian strategic situation are, one, notwithstanding the growing conventional asymmetries, the development and possession of sufficient numbers and varieties of nuclear weapons by both India and Pakistan has made war as an instrument of policy near-redundant," the general added.

"The tried and tested concept of MAD (Mutually Assured Destruction) has ensured that."

"There was," General Kidwai said, "a time in the aftermath of the nuclear tests of 1998, when some people unwisely experimented with the idea that despite the nuclear overhang in South Asia, there was space for limited conventional war and therefore, one nuclear power might be able to overwhelm another nuclear power."

"It could be attributed to an inability to grasp the changed strategic environments of a nuclearised South Asia -- a learning curve perhaps," he said.

"Besides being dangerous thinking, it was also naive as the experience of the last 17 years has shown -- the idea didn't work in the escalation of 2001-2002 nor during the tensions of 2008 nor is it likely to work in the future," the general argued.

Secondly, he pointed out that "the historic coincidence of the near simultaneous emergence of two strong democratically elected governments in India and Pakistan with the advantages of comfortable majorities and the factor of reasonable time at their disposal to address longstanding issues with a sense and understanding of history. This has never happened before."

"These then are the two self-evident realities or givens of the South Asian situation today," he said, and noted, "When we look at the linkage of the two realities, it would make it seem that this just might be the historic opportunity of a lifetime waiting for the two leaderships to grasp, sit together, explore the possibilities of conflict resolution and, in a supreme statesman-like act, go for it, in a manner that all parties to the conflict end up on the winning side."

"No zero sum games, no oneupmanship," he said, and declared, "History and circumstance beckon. Whether history can be grasped remains to be seen."

General Kidwai could not resist throwing in the Kashmir imbroglio and taking pot shots at the US and the international community for ignoring Pakistan's entreaties to take up this issue and put pressure on India.

"Unfortunately those who say that conflict resolution alone will lead to true peace and stability leading to economic development are dismissed as revisionists -- as if seeking resolution to conflict was unnatural and nations should learn to live with conflicts and the status quo," he added.

"In this unstable regional environment," General Kidwai said, targeting India again, "one nuclear power is trying to teach lessons to another nuclear power through the medium of small arms and mortar shells on the Kashmir Line of Control, and bluster."

"Well-meaning nudges from well-meaning friends would be most helpful in the larger interest of international peace and stability in a region dubbed as a nuclear flashpoint," he said, and warned, "A hands-off approach, will be neither here nor there and, of course, the fleeting opportunity of history would have slipped."

The general also criticised the US for "one-sided and discriminatory overtures" in South Asia.

"My submission to friends who want to be helpful -- please note the inadvisability of aggravating the existing delicate strategic balance in a troubled South Asia by one sided and discriminatory overtures, he added."

"Discriminatory approach on issues like the Nuclear Suppliers Group exemption and NSG membership," he asserted, "is already proving to be counter-productive, and it will never be acceptable to Pakistan -- and will in no way contribute toward peace and stability."

"For the last 15 years," he asserted, "Pakistan has taken its nuclear security obligations seriously. We understand the consequences of complacency."

"There is no complacency," General Kidwai claimed. "We have invested heavily in terms of money, manpower, equipment, weapons, training, preparedness and smart site security solutions."

"I say with full responsibility that nuclear security in Pakistan is a non-issue." 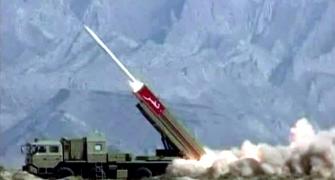 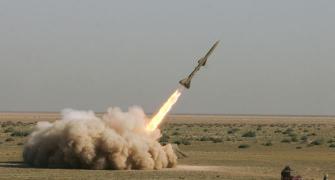 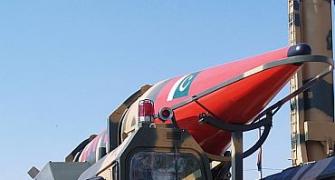 'Pakistan is more obliged to improve the security of its nukes' 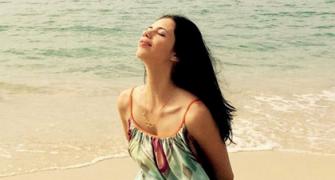 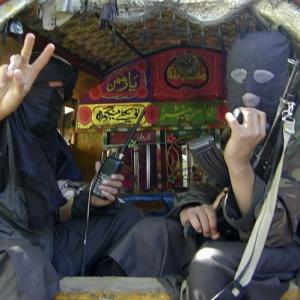