The Monsoon session of the Lok Sabha began on a stormy note on Monday with the Opposition creating a ruckus and preventing Prime Minister Narendra Modi from introducing his newly-inducted Union ministers to both the Houses. 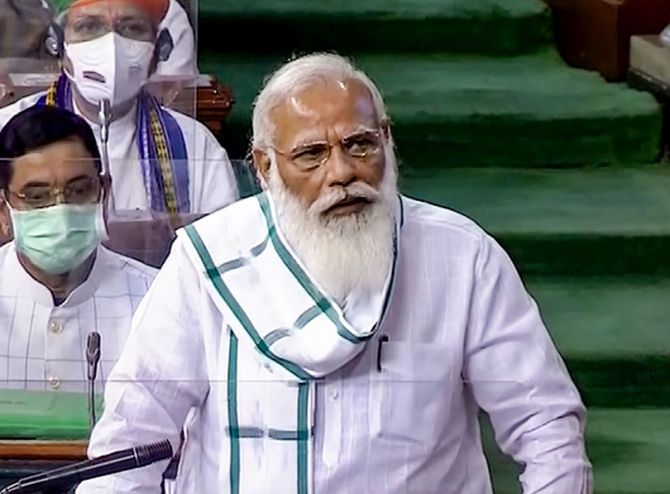 IMAGE: Prime Minister Narendra Modi speaks in the Lok Sabha, on the first day of the Monsoon Session, in New Delhi, on Monday. Photograph: LSTV grab via PTI Photo

As the disruptions continued despite Speaker Om Birla's repeated pleas to maintain decorum, the House was adjourned after nearly 40 minutes till 2 pm.

The prime minister said he was expecting members of the House to show enthusiasm by thumping their desks as a large number of those from the Dalits, Scheduled Tribes and OBC communities as well as sons of farmers and those from economically backward and rural backgrounds have become ministers in the recent rejig.

"However, probably, some people did not like that people of such background have become ministers and that is why they are now conducting themselves with such behaviour," the prime minister said.

Modi appealed to the Speaker to consider introduction of the ministers with the submission of their list to the House.

Responding to the prime minister's appeal, the Speaker announced that the House has accepted the introduction of the ministers.

Criticising the Opposition for not allowing the prime minister to introduce introduce the new ministers, Defence Minister Rajnath Singh said such a thing was happening for the first time in his 24 years of parliamentary career.

"The strength of Parliament is in maintaining healthy traditions. Both Opposition and Treasury should maintain healthy traditions. Even if one or 50 new ministers are inducted, the whole House listens to their introduction by the prime minister with decorum... This is sad, unfortunate and an unhealthy approach," Singh, who is also the Deputy Leader of Lok Sabha, said.

The proceedings of the Lok Sabha were adjourned for the second time amid sloganeering by opposition members over various issues, including those related to rising prices and the new farm laws.

Rajendra Agrawal, who was in the Chair, adjourned the House till 3.30 pm barely 10 minutes after proceedings began at 2 pm.

Agrawal urged members to go back to their seats and allow the House to function normally, but as protests continued, he adjourned the proceedings.

Following this, the prime minister stood up to introduce the newly inducted ministers who had taken oath on July 7 following a major rejig in the council of ministers.

The speaker appealed to the Opposition members to not disrupt the proceedings as it is the tradition of the House for the prime minister to introduce new ministers.

However, they did not relent.

The House also paid tributes to 40 former members who passed away in recent months.

In the Upper House too, the prime minister could not introduce his newly-inducted union ministers as several slogan-shouting opposition members trooped into the well of the House to protest over various issues.

As soon as the House reassembled at 2 pm, there were again uproarious scenes, and the House was adjourned till 3 pm by Deputy Rajya Sabha Chairman Harivansh.

Earlier, Chairman M Venkaiah Naidu had to adjourn proceedings of the House till 2 pm as opposition members, some of them in the Well, kept raising slogans on various issues.

Expressing anguish over the conduct of the protesting opposition members, Modi questioned their mentality behind their behaviour of not allowing him to introduce women, Dalit and scheduled tribe MPs who have been made ministers.

Earlier in the morning, when the House assembled on day one of the Monsoon session, the proceedings were adjourned for an hour as a mark of respect to departed sitting MPs Raghunath Mohapatra and Rajeev Satav.

No sooner did the House meet again at around 12.25 pm, opposition members started raising slogans as the chairman was making his opening remarks about the expectations from the current session amid the Covid pandemic.

Amidst sloganeering, the chairman asked the prime minister to introduce the newly-inducted ministers in the Council of Ministers.

Modi said that when the new union ministers belonging to rural background and children of the farming community were being introduced to the House, some opposition party members were not happy.

He said a large number of women, Dalit and those belonging to scheduled tribes have been made union ministers, but some opposition members do not want to hear their names and give them the due honour.

"What is this mentality?" he wondered.

The prime minister further said it was for the first time that the House was witnessing 'such a mentality'.

As the opposition members continued their uproar, Modi laid the list of newly-inducted ministers on the table of the House.

Meanwhile, the Chairman did not allow the 17 notices by different opposition parties to suspend the scheduled business of the house and take up the matters raised by them.

He said it was not feasible to take 17 issues in one go, and assured the members that all the important matters would be taken up in due course of time.

But the assurance did not pacify the opposition members, forcing Naidu to adjourn the House till 2 pm.

The new Leader of the House and Union minister Piyush Goyal said it was a tradition since the times of first prime minister Jawaharlal Nehru that new ministers are introduced to the House.

Goyal condemned the 'behaviour' of the opposition members and said such a conduct would be harmful for the democratic traditions of the country. 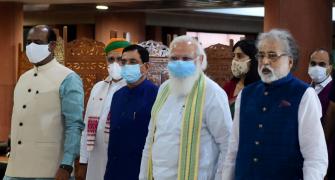 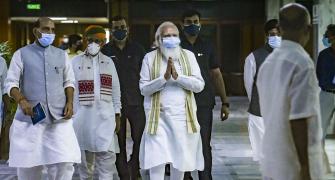