A Pakistani policeman was killed and eight persons were injured while defusing two bombs planted outside a girls' school in the country's volatile northwest.

A policeman succumbed to his injuries in hospital after one of the bombs exploded, TV news channels reported. Pro-Taliban militants had placed two home-made bombs in a garbage heap near the school in Mardan city, 60 km from Khyber Pakhtunkhwa province's capital of Peshawar.

Local residents informed police about the explosives. A team of four policemen arrived at the site to defuse the bombs. One device exploded while it was being defused, injuring

all the policemen and five passers-by.

The injured were taken to a nearby hospital where one policeman died. Another policeman is in a critical condition, officials said.

The blast did not cause any damage to the Government Higher Secondary School, witnesses said. The school was closed at the time of the incident, officials said. No group claimed responsibility for the incident though such attacks are usually blamed on the Pakistani Taliban, who are opposed to the education of girls.

The Taliban have blown up hundreds of schools in Pakistan's northwest and the tribal belt in their campaign against the government.
Rezaul H Laskar in Islamabad
Source: PTI© Copyright 2021 PTI. All rights reserved. Republication or redistribution of PTI content, including by framing or similar means, is expressly prohibited without the prior written consent.
Related News: Pakistani Taliban, TV news, Pakistan, Khyber Pakhtunkhwa, Peshawar
SHARE THIS STORY
Print this article
US removes map showing PoK as part of Pak from website
US drone attacks in Pakistan kill 13 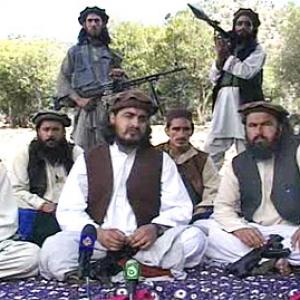