Following a spate of resignations by the panches and sarpanches, Jammu and Kashmir Chief Minister Omar Abdullah on Monday ordered security cover for them in vulnerable areas.

After repeated threats through posters and attacks by militants, over 100 panches and sarpanches have so far submitted their resignation in north Kashmir.

The chief minister directed that 'peace and security should be maintained under all circumstances and the incidents aimed at disturbing tranquility and threatening innocent grassroot public representatives will be dealt in an effective manner'.

A high-level meeting of the Unified Headquarters chaired by the chief minister on Monday afternoon took stock of the prevailing security scenario and law and order situation in the state, according to an official statement issued.

"The scenario after the killing of two panchayat members in the valley recently was reviewed in detail in the meeting. The meeting discussed ways and means to provide required protection to panchayat members to help them function smoothly and securely," the statement said.The chief minister directed that proper security assessment of elected panchayat members should be worked out to provide the security cover in vulnerable areas. He also reviewed arrangements made by the army, security forces and state police to remain vigilant and take all necessary steps to instill confidence in elected representatives.

"The impact of various measures already taken as decided in the last meeting of the Unified Headquarters was also reviewed in the meeting," said the statement.

"The meeting was informed that a number of cases relating to violence against elected panches and sarpanches have been investigated and worked out. It was stated that in certain investigations it has been found that subversive elements and their sympathisers were being used by anti-social elements for meeting their political and personal ends," the statement added. 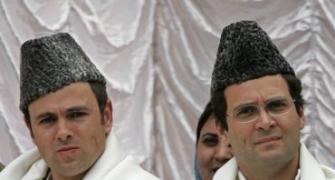