By Aziz Haniffa
November 06, 2010 08:34 IST
President Barack Obama intends his trip to India and US policy towards New Delhi to be "a full embrace of India's rise," a top aide to the president accompanying him on Air Force One has said.

White House National Security Adviser Tom Donilon, briefing reporters abroad Air Force One just before the aircraft touched down at Ramstein, Germany -- where the US military has a base -- for a refueling stop, said the US-India relationship is "a very high priority for us."

Obama's visit is "a next step and a very significant step in US-India relations as we try to take the relationship -- and we will -- to a different level," he added.

According to the travel pool report made available, Donilon, who succeeded General Jim Jones who resigned last month, said "India is a cornerstone relationship for the United States and a bedrock partner in our efforts in Asia."

Obama's domestic political troubles in the wake of the drubbing his Democratic Party received in the mid-term Congressional elections where the Republicans regained the House of Representatives -- winning over 60 seats, the highest ever since World War II, in a clear rejection of Obama's domestic policies -- Donilon added, would not have any impact on the administration's security and economic efforts overseas.

Donilon said there has been "quite solid" bipartisan support for the administration's efforts on counter-terrorism, Afghanistan, and other efforts relevant to Asia. "And we expect to continue to have that kind of support," he said.

"President Obama intends this trip to be -- and intends our policy to be -- a full embrace of India's rise," the national security adviser said, and would be catalytic "to develop and deepen the broadest possible relationship we can have with India as a cornerstone of our Asia policy."

Donilon predicted that the impact of Obama's visit on US-India relations where the president would make a range of specific announcements designed to show how important the relationship is would send a "powerful message to the people of India and the people of the United States."

"It is also an important statement to the region," he said, and added the length of the president's stay would be a statement in and of itself. "And that builds confidence and momentum for the relationship."

When asked if Obama would talk about the Kashmir imbroglio during his visit, Donilon, according to the pool report, added Obama "wouldn't talk specifics."

Meanwhile, Michael Froman, deputy national security adviser for international economic affairs, revealed that during the keynote Obama delivers later today at the Business and Entrepreneurial Summit in Mumbai organised by the US-India Business Council in partnership with the Confederation of Indian Industry and the Federation of Indian Chambers of Commerce and Industry, the president would refer to the "significant" deals between the US and India that are "being consummated."

One of these deals, sources have said, will be the sale of Boeing C-17 aircraft to the Indian military.

Obama's announcement of this deal would be meant for domestic consumption back in the US in order to show that his trip that has been criticised by Republicans after reports began circulating that it would cost $200 million a day -- vehemently denied by the White House on Friday -- was specifically targeted to strike deals, pry open India's markets for American goods and services and generate jobs.

Jim McNerney, the chair of the President's Export Council, will receive Obama at the Chhatrapati Shivaji airport along with Union Minister Salman Khurshid -- the minister in waiting assigned to the American leader -- Maharashtra Chief Minister Ashok Chavan, US Ambassador to India Tim Roemer and India's Ambassador to the US Meera Shankar.

McNerney, who is also Boeing Corp's CEO, will fly with Barack and Michelle Obama on Marine One (the presidential helicopter) to INS Shikra in South Mumbai and then ride in the convoy to the Taj Mahal hotel where the Obamas will stay during their 25 hours in the city.

McNerney will brief Obama about the consummation of the Boeing C-17 deal to the Indian military worth $5.8 billion, which Obama will announce at the USIBC event, to make sure it is heard back at home loud and clear as it will generate thousands of jobs at Boeing's California plant. Unemployment in California currently runs at 12 per cent. 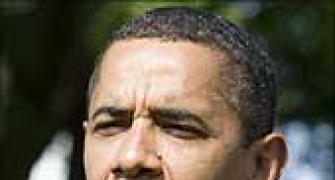 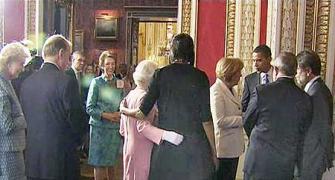 Indian Ambassador to the US Meera Shankar on India-US relations