Press secretary threatens to pull Obama out of talks 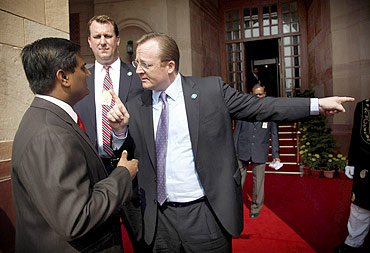 The President's hug and all the smiles notwithstanding, some Americans have got on the wrong side of their Indian counterparts during the Obama visit.
One newspaper reported on Monday morning that American security personnel and Mumbai police officers had an altercation on Sunday morning near the St Xavier's College.

Now we have this image of White House Press Secretary Robert Gibbs, right, wagging his finger at Prakash Gupta, an Indian Foreign Service officer who is currently attached to the Ministry of External Affair's External Publicity Division at Prime Minister Manmohan Singh's office at Hyderabad House on Monday morning.

According to a reporter accompanying the President, when Indian officials cut the number of reporters permitted into the room where Dr Singh, Obama and their delegations were meeting from the agreed upon number of eight to five, Gibbs was livid.

'Gibbs,' the reporter wrote, 'announced loudly and persistantly on steps of Hyderabad House that he would pull POTUS (President of the United States) of bilat (bilateral meeting) with PM Singh unless "the White House 8," as we've come to be known, were all allowed in.'

'At one point, Gibbs literally had his foot lodged in the closing front door,' the reporter adds, 'asking if the Indian security officials pushing hard to shut it were going to break his foot. More angry words ensued, and after Gibbs convinced them, through high volume and repetition, that he was serious about pulling POTUS, we all made it inside.'

After the White House 8 were escorted in along with the Indian media, the American journalists discovered, 'Delegations seated opposite each other along a long light-wood table, beneath a simple chandelier. POTUS and PM Singh sat across from each other at table's middle. No words spoken, just smiles. Escorted out a minute later.' 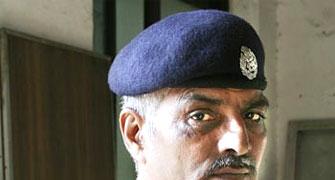 'I didn't understand a word of what Obama said'
Complete Coverage: Obama in India 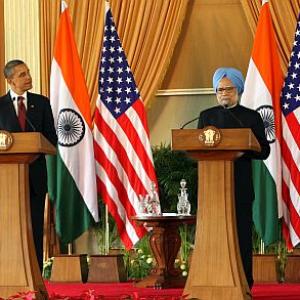 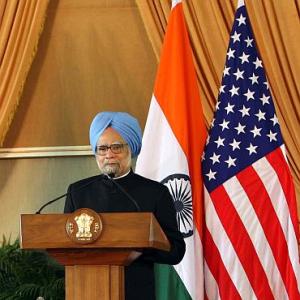