Govt should have reacted to Obama's Myanmar, Iran snubs: BJP

Source: PTI
November 09, 2010 19:47 IST
The Bharatiya Janata Party on Tuesday indicated that it may demand a clarification from the government on why it did not react to United States President Barack Obama's "snub" on India's silence over problems related to Myanmar and Iran.

"Obama snubbed India's foreign policy towards Iran and Myanmar during his address to Parliament and the government did not react to it at all. The government could have spoken on the issue on Tuesday but lacks the capability to give quick responses," a senior BJP leader said.

The Opposition may demand a statement from the government in the Parliament on how it views Obama's criticism of India's foreign policy vis-a-vis these two countries.

While giving positive vibes about India's prospects of joining an expanded United Nations Security Council, Obama had said that with increased power comes increased responsibility but India has often been seen as shying away from expressing its views on weakening of democracy in Myanmar and the stand of Iran on several issues.

"Different governments in India have consistently demanded that democracy should be restored in Myanmar and that the country's democracy icon Aung San Suu Kyi should be released. But that does not mean we snap ties with that country," the BJP leader said.

It is important for India to maintain relations with Myanmar as this helps keep China at bay from that country, contain United Liberation Front of Asom, which had built training camps there earlier, and also helps in administration of northeast states, feels the BJP.

Similarly, the party feels relations with Iran are important as it stands with India when most other Islamic nations are "opposed" to it. The US has been concerned about Iran's growing ambitions of becoming a nuclear power. The Opposition was also not pleased with the manner in which its leaders were "ignored or not given due importance".

"Though Sushma Swaraj is Leader of Opposition in Lok Sabha she was not invited to the dinner hosted by the Prime Minister in Obama's honour," a senior BJP leader said. The party was also not amused that Congress General Secretary Rahul Gandhi was seated at the high table with Obama and US First Lady Michelle at this dinner though he is just a Member of Parliament. Former deputy prime minister and BJP leader L K Advani and senior members of the union cabinet were seated at other tables. "This was not a private dinner. The money was paid from the taxpayers' pocket," a senior BJP leader said.
Source: PTI© Copyright 2021 PTI. All rights reserved. Republication or redistribution of PTI content, including by framing or similar means, is expressly prohibited without the prior written consent.
Related News: Bharatiya Janata Party, Barack Obama, India, Iran, Parliament
SHARE THIS STORY
Print this article 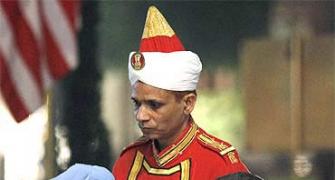 Why Obama visit is significantly successful
The TV guide to Obama
Obama in India: Full coverage 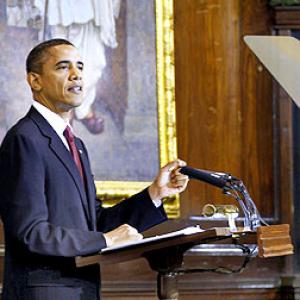 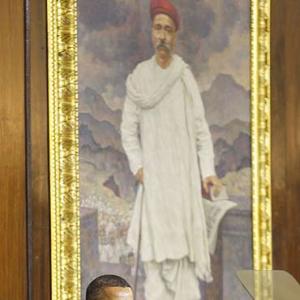