Obama appoints Indian American for US court of appeals 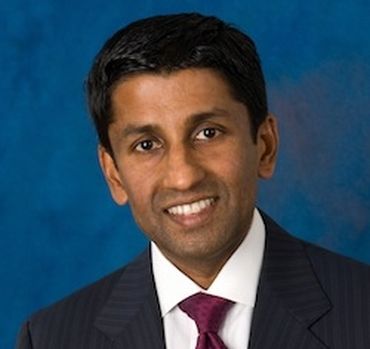 Srikanth 'Sri' Srinivasan, 45, a brilliant Indian American legal mind, who, in August last year was named principal deputy solicitor general of the United States, succeeding Neal Kumar Katyal, has been nominated by President Barack Obama to serve on the US court of appeals for the District of Columbia.

Thus Srinivasan creates history, becoming the first South Asian American in the country's history to be nominated to a seat on a federal circuit court.

Along with Srinivasan, the president also nominated Caitlin Halligan, to also serve on the same court.

Obama said, "Caitlin Halligan and Sri Srinivasan are dedicated public servants who will bring their tremendous experience, intellect, and integrity to the US court of appeals for the District of Columbia Circuit."

"This important court is often called the nation's second-highest court, and it stands more than a quarter vacant," he said, and taking a hefty swipe at the Republican lawmakers on the senate judiciary committee, added, "I remain deeply disappointed that a minority of the United States Senate blocked Ms Halligan's nomination last year and urge her reconsideration, especially given her broad bipartisan support from the legal and law enforcement communities."

Meanwhile, with regard to Srinivasan, Obama predicted, "Mr Srinivasan will be a trailblazer and, like Ms Halligan, will serve the court with distinction and excellence."

In announcing Srinivasan's nomination, the White House said that "he is a highly-respected appellate advocate who has spent a distinguished career litigating before the US supreme court and the US courts of appeals, both on behalf of the United States and in private practice."

The Chandigarh-born Srinivasan began his legal career by serving as a law clerk for Judge J Harvie Wilkinson on the US Court of Appeals for the DC Circuit from 1995 to 1996. He then spent a year as a Bristow Fellow in the office of the solicitor general before clerking for Justice Sandra Day O'Connor during the Supreme Court's 1997-98 term.

He then had a stint in the private sector as an associate at the law firm of O'Melveny & Myers LLP in Washington, DC from 1998 until 2002 and then returned to the solicitor general's office as an assistant to then Solicitor General Walt Dellinger, representing the United States in litigation before the supreme court.

In 2007, Srinivasan began his second stint in the private sector when he became a partner with O'Melveny & Myers LLP and in 2011, he was named the chair of the firm's appellate practice group.

Srinivasan was also a lecturer at Harvard Law School, where he taught a course on supreme court and appellate advocacy and is a published author and has received many awards and recognitions including being named The National Law Journal's 50 Most Influential Minority Lawyers in America in 2008.

Then in August last year, he was named as the principal deputy solicitor general by Solicitor General Donald B Verrilli Jr, who in announcing the appointment said, "I am very pleased Sri will be returning to the Solicitor General's office in this important role."

Verrilli said, "He is one of the country's leading advocates before the supreme court, and will bring to his new position both a deep knowledge of the supreme court and of the office and its responsibilities and traditions," and predicted that "he will be an invaluable asset to the Department of Justice and to the work we do to protect and defend the interests of the American people."‪

Srinivasan is widely recognised as one of US' leading appellate and supreme court advocates and has argued before the supreme court twenty times, drafted briefs in several dozen additional cases, and has also served as lead counsel in numerous cases before the federal and state appellate courts.

After immigrating to the US with his parents as a child, he grew up in Lawrence, Kansas and received his BA with honors and distinction in 1989 from Stanford University and his JD with distinction in 1995 from Stanford Law School, where he was elected to Order of the Coif and served as an editor of the Stanford Law Review. He also holds an MBA from the Stanford Graduate School of Business, which he received along with his J.D. in 1995.

Srinivasan's nomination was hailed by both South Asian law groups as well as leading Asian American organisations who lauded President Obama for naming such a trailblazer as a judge in what Obama himself had described as the second most important and influential court in the United States.

The North American South Asian Bar Association, noting that Srinivasan was an erstwhile member of its National Advisory Committee, welcomed the decision of President Barack Obama and said it was pleased with the president's decision because NASABA had strongly "advocated for the need for greater representation of the South Asian community in the nomination and appointment of federal judges with the Obama administration"

It noted that "the South Asian community comprises over 2.8 million people in the United States, yet there are only two South Asian Americans who currently serve as Article III judges in the entire nation. Srinivasan is the first South Asian American to ever be nominated to a seat on a federal circuit court, and the first person of Asian descent to ever be nominated to the US court of appeals for the District of Columbia, which is considered by many to be the second most important court in the nation."

"NASABA is proud that President Obama has recognised this critical need and strongly supports the nomination of Sri Srinivasan to the DC Circuit," it added.

The group's president, Jolsna John said, "We support the ongoing efforts of the Obama administration at increasing judicial diversity, and applaud President Obama for nominating such a well-qualified nominee to the D.C. Circuit."

It reiterated that "Sri Srinivasan's experience and background make him an ideal candidate for a position on this important court, and NASABA is proud to support his nomination."

Chu said, "President Obama has already broken barriers by more than doubling the number of Asian Americans on the federal bench, including the only two Asian American judges currently serving at the appellate court level. Today, he added to this historic accomplishment by nominating US Principal Deputy Solicitor General Sri Srinivasan to the US Court of Appeals for the DC circuit, one of the most important courts in the country.

She said, "Mr Srinivasan is exceptionally well qualified and a trailblazer as the first South Asian American to ever be nominated for a federal appellate court. I commend the President for his commitment to putting forth highly qualified and diverse judicial nominees, and I urge my Senate colleagues to move forward with Mr Srinivasan's confirmation process."

Honda in echoing Chu's sentiments described Srinivasan as "an exemplary public servant," and thanked the president for nominating him "to the US court of appeals for the District of Columbia Circuit."

"This nominee exemplifies the Obama administration's commitment to a highly qualified bench, as well as the president's commitment to diversity that truly reflects America," he added.

Honda while thanking Obama "for his leadership with this nomination," urged the Senate "to act swiftly in confirming this nominee to ensure a more diverse Asian American Pacific Islander representation in all branches of government."

When Srinivasan was appointment principal deputy solicitor general, his former boss, Dellinger said, "From the time Sri and I first worked together in the Solicitor General's office in 1996, I have thought that he would become one of the best advocates and finest lawyers of his generation."

Dellinger also a partner at O'Melveny said, "It has been both a great privilege and great fun to work with him at O'Melveny."

Dellinger, under whom Srinivasan served when he won a the coveted year-long Bristow Fellowship in the US Solicitor General's office and who had spoken to rediff.com several years ago when Srinivasan argued his first case before the Supreme Court, told rediff.com, "Didn't I predict great things for Sri, and I was right wasn't I."

He said Srinivasan "is clearly one of the most gifted lawyers of his generation."

Dellinger, continued, "Sri is more than just a talented lawyer. He is someone who wins the affection and admiration of everyone with whom he deals."

He also noted that Srinivasan, while growing up in Lawrence had turned out to be a star basketball ball player for Lawrence High School playing point guard, and declared, "Sri is not only a great human being but also a great athlete. He still plays a fine game of basketball and he's someone who is popular everywhere he goes."

"In addition to everything else, Sri is also a wonderful father to these terrific twin children -- a boy and a girl," he said.

Dellinger recalled that "Sri was on a one-year fellowship in the solicitor general's office during the term that I spent as solicitor general and I thought I saw at that time he had the makings of a truly great lawyer and I must say, I am not surprised at how successful he's been."