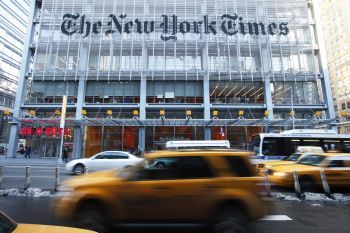 The websites of the New York Times, the Huffington Post and Twitter were hacked by a group known as the Syrian Electronic Army which posted messages supporting the embattled Syrian President Bashar al-Assad.

"Our website was unavailable to users in the United States for a period of time on Tuesday. The outage was the result of an external attack on our domain name registrar, and we are at work on fully restoring service," The NYT said in a message posted on its website.

The NYT chief information officer Marc Frons sent the same update internally to employees at 4:20 pm (local time) and advised them not to send out sensitive emails "until this situation is resolved," according to a statement from the NYT.

The attack on America's major media organisations comes as the US weighs a limited military strike on Syria for allegedly using chemical weapons against its own people.

Frons said the attack was carried out by a group known as "the Syrian Electronic Army or someone trying very hard to be them".

The Syrian Electronic Army is a group of hackers who support President Assad.

The NYT website first went down after 3 pm (local time); once service was restored, the hackers quickly disrupted the site again. Shortly after 6 pm, Frons said that "we believe that we are on the road to fixing the problem."

Matt Johansen, head of the Threat Research Centre at White Hat Security, posted on Twitter that he was directed to a Syrian web domain when he tried to view The Times's website, the daily said.

"In terms of the sophistication of the attack, this is a big deal. It's sort of like breaking into the local savings and loan versus breaking into Fort Knox. A domain registrar should have extremely tight security because they are holding the security to hundreds if not thousands of websites," Frons said.

The Syrian Electronic Army also claimed credit for an attack on the Huffington Post UK's site, and for hacking into Twitter's registry account and changing information there.

In a statement, Twitter said it appears that for nearly two hours, records "for various organisations were modified, including one of Twitter's domains used for image serving, twimg.com."

The Syrian Electronic Army has frequently targeted the US news media. The group has hacked into the Twitter feeds of the Associated Press and The Washington Post, and on August 15 they briefly hacked the websites of several major news organisations, including CNN, redirecting them to a SEA page.