The Central Bureau of Investigation has registered four new cases in connection with alleged graft in the use of central funds allocated to Uttar Pradesh under the National Rural Health Mission.

The agency started a search operation on Wednesday evening at six locations in Ghaziabad, Lucknow and Agra in Uttar Pradesh and Vapi in Gujarat in connection with the case.

The search operations are continuing on Thursday, CBI sources said.

Of the four cases registered by the agency, first is against the officials of Directorate General, Family Welfare, Uttar Pradesh for the purchase of huge quantities of Leomizole tablets to the tune of Rs 2.47 crore from a private firm at an exorbitant rate and ignoring the cheaper alternative available, the sources said.

The second case was registered against district health officials of Lucknow and a private firm on the allegation that a sum of Rs 12.5 lakh under NRHM funds meant for upgradation of hospital etc was misappropriated, CBI sources said.

The third case is against private persons for alleged fraudulent receipts of huge amount in the name of Rajasthan Drugs and Pharmaceutical Ltd by opening a bank account in the name of the company and encashment of cheques meant for it, the sources said.

"The allegations are of procuring orders under NRHM in the name of a state PSU while the payments received were being diverted to a personal account of the accused," an official concerned with the probe said.

The details of the fourth case were not revealed by the agency.

When contacted, the CBI spokesperson confirmed registration of four new cases in connection with the NRHM scam.

With the registration of new cases, 18 new cases have been registered by the agency in the alleged irregularities of use of NRHM funds.

The agency has slapped charges of criminal conspiracy and forgery besides relevant sections of Prevention of Corruption Act.

The agency has taken up investigation of NRHM scam on the orders of the Allahabad high court on November 15, 2011 which had directed the agency to carry out Preliminary Enquiry on utilisation funds during 2005-06.

CBI had registered five preliminary enquiries after the order and so far registered 18 cases.

"During the course of investigation, in these cases till date, CBI had conducted searches at 183 places at the residence and office premises of various public servants, private persons and beneficiary firms," CBI spokesperson had said about the ongoing probe.

"Further, Rs 1.6 crore in cash has been seized and Rs 14.80 crore has been frozen in various bank accounts of the accused and suspect persons. In four cases, charge-sheet has been filed against two firms and 20 persons including the then minister of family welfare and an MLA," she said. 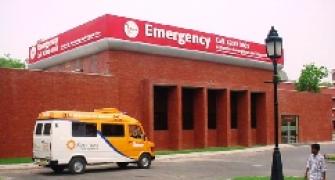