The posters bearing Joshi's picture along with lotus, BJP's election symbol, have appeared at a number of places including IT crossing, Parivartan Chowk, Kalidas Marg and near the DGP office.

The posters urged Joshi to continue with his struggle and flayed the BJP for "sacrificing a man to please another".

"Ek ka balidan, ek ko samman, kya yahi hai BJP ki reeti neeti aur pehchaan (Sacrifice one and honour another. Is this the policy and identity of the BJP?" read a poster.

"What is the compulsion for the BJP...Please one leader and demand resignation from another leader," read another poster. When contacted, Uttar Pradesh BJP president Laxmi Kant Bajpai said party did not take cognisance of anonymous posters.

"The party does not take cognisance of posters not having the name, designation and address of a person getting it printed or the name and address of the printer," he told PTI.

Bajpai said it was the handiwork of those who want to create 'news of rift' within the party.

"The BJP is united and will remain united," he said. Bajpai said the administration should take cognisance of such anonymous posters, conduct a probe and get these removed.

Recently, some posters, targeting Gujarat Chief Minister Narendra Modi without naming him, had appeared at the BJP headquarters in New Delhi and Ahmedabad.

After Delhi, such posters were also seen near the BJP headquarters in Bhopal on June 20 but were removed later. 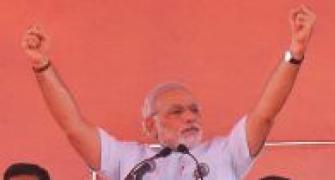 Exclusive: Modi may contest LS poll from Gujarat, UP

Sangma to file nomination on Thursday 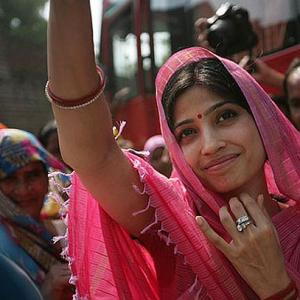