Speaking to editors at a press meet in New Delhi on Monday, Prime Minister Manmohan Singh said he was not considering retirement.

The PM also indicated that he would consider a cabinet reshuffle before the next session of Parliament due on November 7.

The PM said his cabinet was functioning with a much greater degree of cohesion than even the first cabinet headed by Jawaharlal Nehru, and said, "I can't say that I will shut up every colleague in my cabinet."

"I am not not aware of anything that can be called a disconnect between the Congress party and the government," Singh told the editors in his interaction.

Source: PTI© Copyright 2021 PTI. All rights reserved. Republication or redistribution of PTI content, including by framing or similar means, is expressly prohibited without the prior written consent.
Related News: Manmohan Singh, Supreme Court, Jawaharlal Nehru, Congress, Parliament
SHARE THIS STORY
Print this article
Back from US, Sonia may attend Parliament
Congress' enrollment drive in Andhra a success 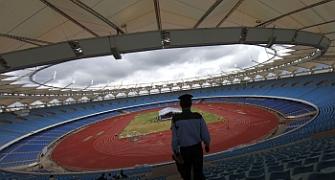 After stormy Parliament session, PM to meet editors on Monday