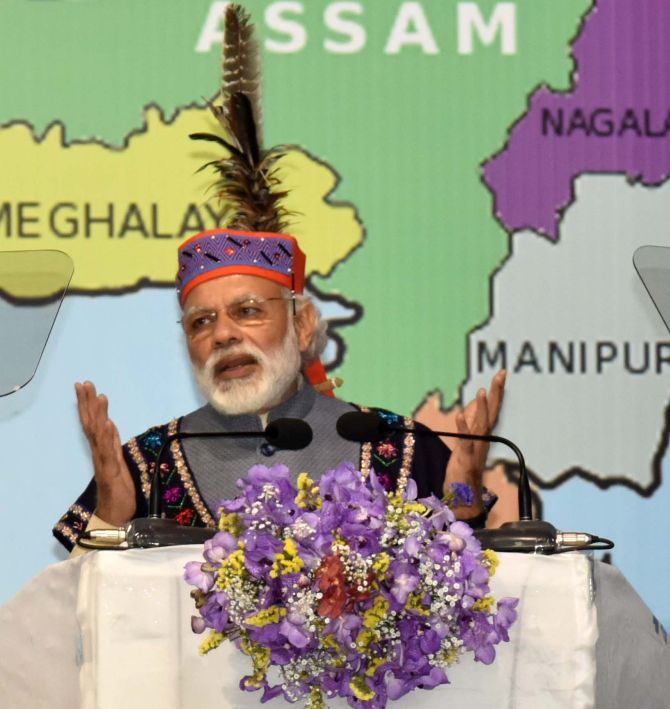 Describing north-east as the "gateway" to south-east Asia, Prime Minister Narendra Modi on Friday said his government has been pro-actively pursuing the 'Act-East Policy' and working to improve infrastructure in the region but "much more needs to be done".

Addressing a public meeting in Shillong after flagging off three new trains, he said his government intends to connect all north eastern states by rail network and upgrade infrastructure in road, telecom, power and waterways to bring them on a par with the developed states.

"My government has been pro-actively following the 'Act-East Policy'. As part of this policy, it is our mission to upgrade the infrastructure in road, rail, telecom, power and waterways in the region," he told the gathering.

"I consider the north eastern region as the gateway to South-East Asia.... A lot is being done. Much more still needs to be done," said Modi who earlier in the day chaired a meeting of north eastern council, comprising all states of the region.

He said since the formation of the National Democratic Alliance government at the Centre, more than Rs 10,000 have been spent for development of railway network in north-east and the railway ministry plans to spend more than Rs 5,000 during the current year.

Highlighting the tourism potential of the region, he stressed was need for developing tourist circuits by providing better facilities to tourists in terms of improved road connectivity, hotels and cleanliness.

He said the central government has launched a new scheme 'Swadesh Darshan', under which it is developing tourist circuits in the country and "one such circuit is proposed for the north-east".

During his visit, the prime minister also dedicated to the nation the doppler weather radar at Cherrapunji, which receives the highest rainfall in the country. "Another feather has been added to its cap," he said.

"The north-east, a land of beauty and adventure, has been hit by several natural calamities in the recent past, on account of heavy rain and landslides. This weather radar system will enable better weather forecasts, especially for the north-eastern region. This should help in minimizing the threat posed by extreme weather conditions," he said.

"We are opening up both road and rail routes to our neighbouring countries. This will give a boost to the economic development of the region," the PM said.

With Meghalaya and Arunachal Pradesh brought on country's rail map in November 2014 and Agartala in Tripura connected with broad gauge rail line, he said broad-gauge passenger trains will now connect states of Manipur and Mizoram.

"Today is indeed a red letter day in the history of the north-east. Broad gauge passenger trains will now connect the states of Manipur and Mizoram. Today, Kamakhya in Guwahati has been directly connected with Vaishno Devi in Katra near Jammu," he said.

Modi said the 'National Highways and Infrastructure Development Corporation' set up in July 2014 for development of highways in north eastern region is constructing three new bridges on Brahmaputra River.

He said the corporation is implementing 34 road projects in north-eastern region to construct around 1,000 kms of roads at a total cost of over Rs 10,000 crore.

The north-east road sector development scheme has been started with an aim of connecting every district in the region with a national highway.

The prime minister also said the development of inland waterways has been given a boost and the Union government has declared 19 waterways in the north-east as national waterways.

Promising 24X7 electricity to all and aiming that no village in the country remains without power by 2018, he said two projects covering all eight north-eastern states are being implemented at a cost of around Rs 10,000 crore for improving power transmission.

The commissioning of the Bishwanath-Chariyali to Agra transmission network has made available 500 megawatts of power in the region from outside, he said.

The PM also said his government is implementing a comprehensive telecom plan for north-eastern region at a cost of over Rs 5,300 crore and Agartala has become the third city in India to be connected with an international gateway through Cox Bazar of Bangladesh.

"This has improved telecom connectivity and will give a boost to the economic development of the region," he said.

Modi lauded the artefacts and products displayed at an exhibition of stalls set up by self-help groups of women from all north-eastern states and said his government is committed to development of such groups, particularly of women, and his Cabinet has approved a special package fund for these states.

"The objective is to accelerate implementation of national rural livelihood mission, so as to cover two-thirds of all rural households in north-eastern states by 2023-24," he said.

Unveiling a plaque for foundation stone of a football stadium in Shilong, he hoped it will go a long way towards fulfilling the objective of state government's "Meghalaya Mission Football" that aims at detecting talent at grass-root level and providing support for grooming and nurturing promising children and youngsters as professional footballers.

The football stadium is being constructed at a cost of Rs 38 crore with the help of Union ministry for development of north-eastern region.

With India hosting the Under-17 FIFA World Cup in 2017 and Meghalaya having a number of football clubs and associations, the prime minister said, "Perhaps, you can organize competitive local tournaments and lead the way for other parts of country, to build a series of major events leading to Under-17 World Cup."

Modi also recalled names of some big footballers from the region who have earned a big name for their state and country by participating at international levels.

"We need to take advantage of this event being held in India and ensure the spread and development of this sport not only in the north-eastern region, but also in other parts of the country," he said.

The prime minister said during his last visit to Gangtok a few months ago, Sikkim was declared as the first organic state in the country and hoped other NE states took a lead from Sikkim to turn organic too.

"In fact, the north-eastern region has the potential to become organic food basket of India. This will increase the income of the farmers," he said.

He also highlighted various goverment schemes including PM Mudra Yojana under which collateral free loans are provided to small entrepreneurs and said during 2015-16 more than 3.48 crore entrepreneurs were sanctioned loans of over Rs 1.37 lakh crore, out of which 6 lakh loans were sanctioned in north-eastern states for a value of around Rs 2800 crore.

He also said that to boost industrial activity and employment under north-east region textile promotion scheme, one apparel and garment making centre is being set up in each of the eight states at a cost of Rs 145 crores and of the 8 centres, 7 centres have already been completed, each having three units. 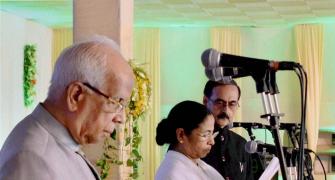 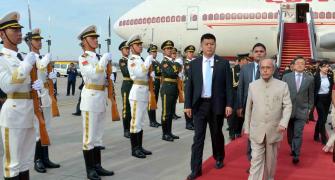 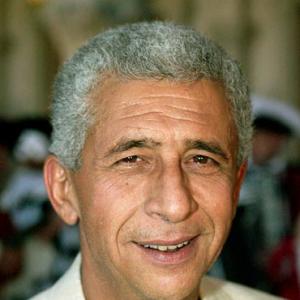 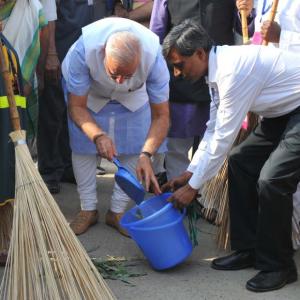